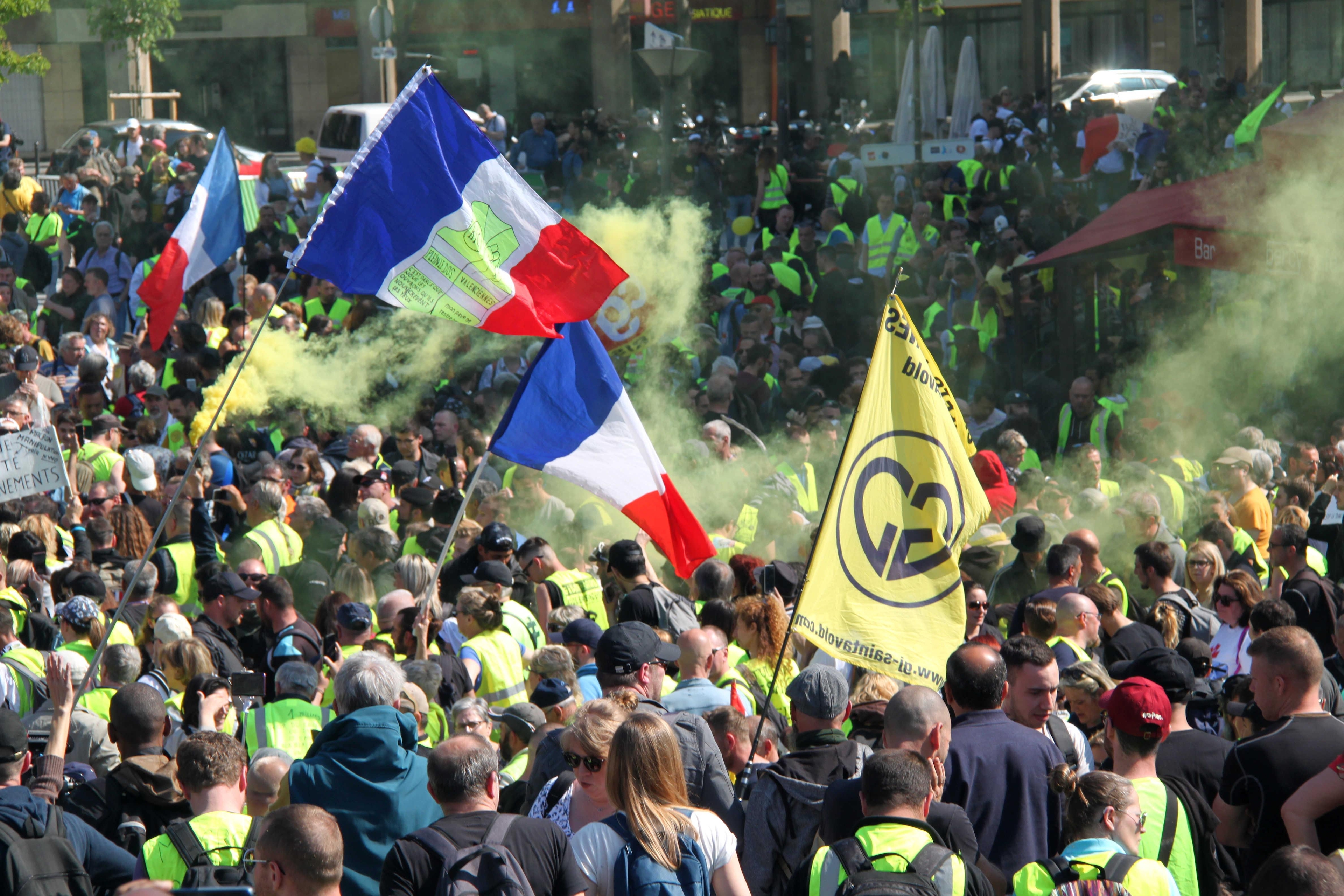 It's Friday. I'm tired. Remind me about this.

Back in November, yellow vest protesters – mostly made up of lower- and middle-class citizens in France – started protesting against a fuel tax hike that the gov hoped would help fight climate change. Protests have continued every weekend since.

Every weekend? That's a lot of weekends.

Yup. 23 weekends in a row, to be exact. But what they're currently protesting has gone beyond the tax hike. It's turned into resentment against the government over wealth inequality. Many of the protesters say they couldn't afford that fuel tax increase, let alone pay their bills.

What exactly have they been demanding?

Get the gov to scrap the fuel tax hike. Check. Increase the minimum wage. Check. Now, it's a mix of things like calling for the country's parliament to dissolve and for Macron to step down.

Rough. So what's Macron doing about this now?

After wrapping up a series of town halls and talking directly to the French people, he's got some new things to announce. Mic please: more tax cuts for the middle class, a measure to boost pensions, more lax rules around holding referendums, and getting rid of a fancy school that trains the country's corporate and political leaders. But he's not budging on bringing back a tax on the wealthy – although that'll be reviewed again next year. So that's something.

Will the protesters take the bait?

Our Magic 8 Ball says: outlook, not so good. Critics may start blasting JoJo and singing "it's just too little, too late." It's unclear if there'll be more protests this weekend.

This movement has become the biggest political crisis since Macron took office two years ago. And the stakes are high for him. His popularity is down and he's been called the "president of the rich," but protesters want him to do more to prove that he's the president of all French people.

Skimm More: Learn more about the fuel tax hike and how 'yellow vests' fit into all this.

What's getting put on hold…

Trump admin abortion rules. Earlier this year, the Dept of Health and Human Services issued new rules for health clinics that receive federal funding for family planning services. The changes included banning these clinics from referring patients to an abortion provider. And requiring clinics that perform abortions to do it in separate facilities from other health services. A group of states sued. Now, a federal judge is putting the new rules on hold while this plays out in the courts.

Why you've been seeing North Korea in the headlines…

Otto Warmbier. Yesterday, it came out that North Korea wanted the US to pay $2 million for Warmbier's medical care. In 2016, the University of Virginia student was sentenced to 15 years in prison with hard labor in North Korea for allegedly trying to steal a propaganda poster. But he died in 2017, days after being released and medically evacuated while he was in a coma. Now, it's coming out that the US envoy sent to retrieve him had signed off on the US paying his $2 million medical bill. It looks like the Trump admin still hasn't paid up, and this bill reportedly didn't come up during either of President Trump's summits with North Korean leader Kim Jong Un. Speaking of summits…

The Putin-Kim summit. Russian President Vladimir Putin had his first one-on-one with Kim. And Putin came out and reminded everyone what we already know: Kim is willing to give up nuclear weapons but only if he gets security guarantees. Putin also hinted at another round of six-party talks, between Russia, North Korea, the US, China, Japan, and South Korea. And says he'll brief the US on his convo with Kim.

Skimm This: Listen to our podcast for what else went down in the Putin-Kim summit.

What people are still talking about…

Sri Lanka. Yesterday, officials lowered the death toll from the Easter Sunday bombings from 359 to 253. Officials say the difficulty in identifying bodies contributed to the inaccurate higher count.

What's getting called out...

A Houston high school with a dress code…for parents. It bans things like pajamas, leggings, short dresses, as well as satin caps and bonnets. The school is getting flak, especially for the hair restrictions that many see as discriminatory towards black women. No comment from the Houston Independent School District.

...Oh and we wouldn't gossip in this town in the Philippines. It's banned.

Why we need a complaint cleanse…

We're all stressed. So, take a breather. Maybe listen to some music.

Why your office had a few new faces yesterday…

Skimm This. Our new daily podcast heard from some of HQ's mini-me's for Take Your Kids to Work Day. It also covers all the news you need to know, so tune in at 5pm ET every weekday.