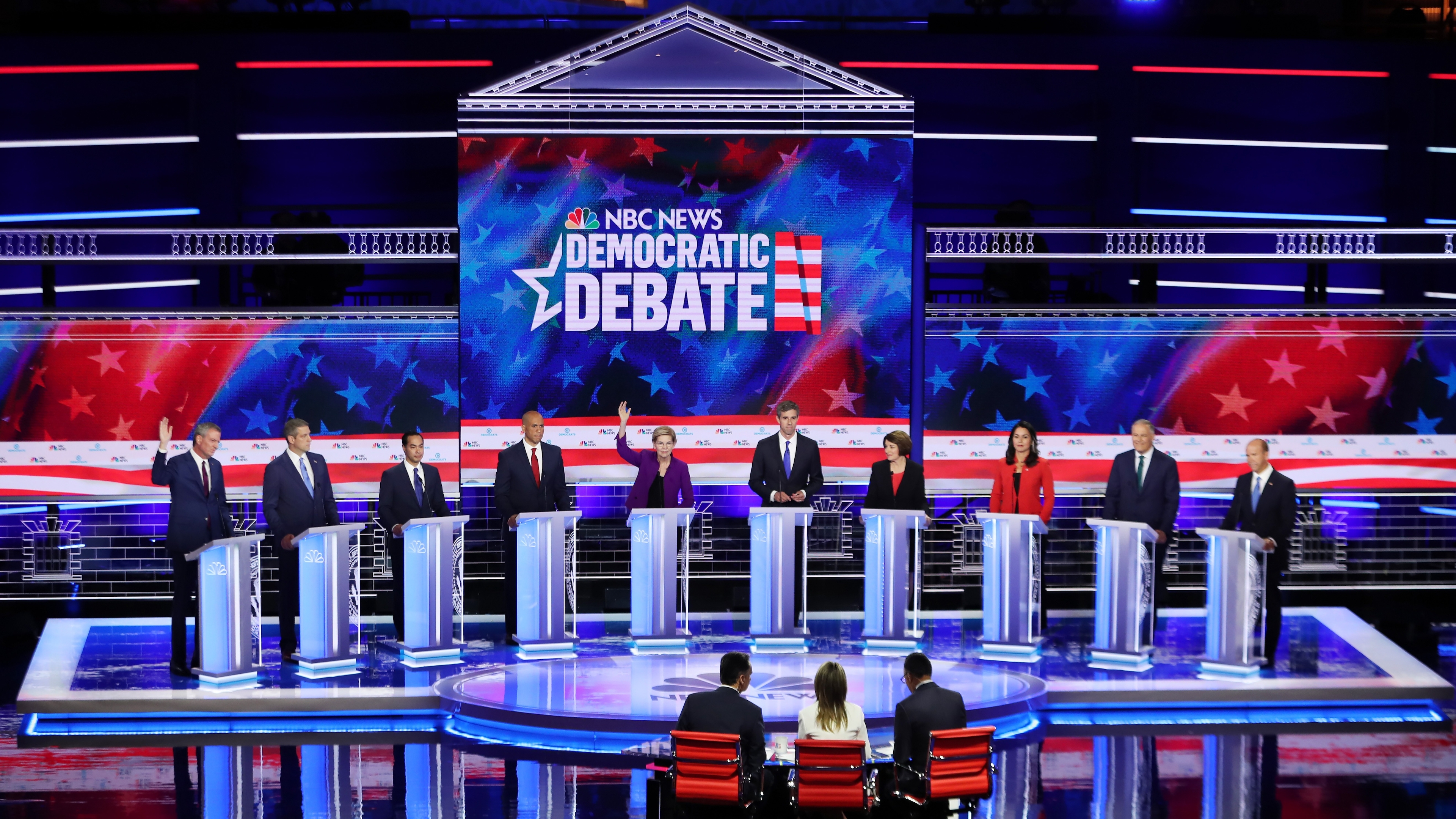 Last night marked the season premiere of 'Who Wants to Be a President.'

You mean the 2020 Democratic primary debates?

Yeah, yeah. The first debate is broken up into two nights.

Close. There are 25 Dem candidates. But only the 20 who got 1% or more in three polls – or got money from enough donors – made the cut for prime-time. Last night, the first 10 took the stage.

Give me the gist of it.

Here's what they agreed on: The economy isn't working. Neither is health care, the current immigration system, gun laws, or Sen. Mitch McConnell (R-KY). We need to protect reproductive rights. And fight climate change.

Was there stuff they didn't agree on?

Yup. Former HUD Secretary Julián Castro and former Texas Rep. Beto O'Rourke debated whether to decriminalize crossing the US-Mexico border illegally. Sen. Cory Booker (D-NJ) was the only one who wasn't thrilled about rejoining the OG Iran nuclear deal. Sen. Amy Klobuchar (D-MN) didn't feel the Bern for Medicare for All. And while many said the most pressing issues were climate change and China, NYC Mayor Bill de Blasio said 'hi, anyone remember Russia?'

How do we tell everyone apart?

It sort of felt like high school debate club. So let's crack open the yearbook, shall we?

Most likely to remind you where they're from...Sen. Cory Booker (D-NJ). The answer is Newark, by the way. And don't forget it. He got the most air time last night, and used it to decry gun violence and Amazon, and to stareinto the depths of Beto's soul.

Most likely to interrupt...NYC Mayor Bill de Blasio. His message: don't blame immigrants for your troubles. Blame big corporations and the 1%.

Most likely to not stand for mansplaining...Sen. Amy Klobuchar (D-MN). She was here to remind male candidates (ahem, Jay Inslee) that women have fought hard for reproductive rights. Her other issues of the night: foreign policy, big pharma, and beer.

Most likely to have Duolingo on their phone…Former Texas Rep. Beto O'Rourke. When he wasn't speaking Spanish, he was sharing some stories. Did you know he once talked to someone with diabetes?

Most read up on history...Rep. Tulsi Gabbard (D-HI). She schooled what's-his-name (read: Rep. Tim Ryan (D-OH)) on the difference between the Taliban and al-Qaeda. That's because Gabbard served in the military. And takes foreign intervention very seriously.

Best at staying on message…Washington Gov. Jay Inslee. He stepped out of his comfort zone for a few seconds before getting back to his true love: fighting climate change.

Most likely to surprise you…Former HUD Sec Julián Castro. He was in it to win it last night. He made sure people knew he was the first candidate to release a comprehensive immigration plan. He said he's for "reproductive justice." And took on Beto face-to-face.

Least likely to surprise you…Former Maryland Rep. John Delaney. We didn't expect to hear much from him...and we didn't. But not for lack of trying.

Most likely to get a talking to...NBC. Yikes.

That was fun. I gotta ask…any word from President Trump on last night's action?

Yup. He thought it was "BORING!"

The Democratic field is shaping into two types of candidates: those here to shake things up (read: the progressives like Elizabeth Warren and Bernie Sanders). And those here to bring back the norm (read: the moderates like Joe Biden and Amy Klobuchar). For many, night one ended without a lead contender. We'll hear from the rest of the crew tonight. Stay tuned.

What Google doesn't want you to Google…

This petition. About 100 Google employees are calling on San Francisco Pride to ban the company from participating in this weekend's Pride parade. The reason: they're accusing Google-owned YouTube of allowing "abuse and hate and discrimination against LGBTQ+ persons." This came weeks after YouTube refused to remove videos including anti-gay comments about a Vox journalist. The org has refused to cut Google from this weekend's parade, calling the company a longtime "ally" that's marched for years.

This lawsuit. Hundreds of people in France are suing Google for allegedly violating their data privacy rights. Last year, the EU enacted sweeping privacy rules (GDPR) that make companies responsible for protecting people's data. This lawsuit is over Google allegedly making it hard for users to block geolocation tracking, among other things. If Google loses, it could pay 1,000 euros to each of the 200 people currently suing...and more if the country's estimated 28 million Android users join the suit. Stay tuned: this case could take years.

This photo of a migrant father and child. (Heads up, it's disturbing.) It shows them lying dead in the Rio Grande river near a Texas border town. They are believed to have drowned earlier this week while trying to cross the river. The photo has since gone viral amid reports of alarming conditions at detention centers in Texas. It's also serving as a reminder of the desperate measures some asylum-seekers are willing to take to get to the US.

Skimm This. Our daily podcast talks about the moon rocks that've been sitting around in a lab since the moon landing in 1969. Now thanks to some 21st century tech, scientists plan to give them another look. This ep's far out.