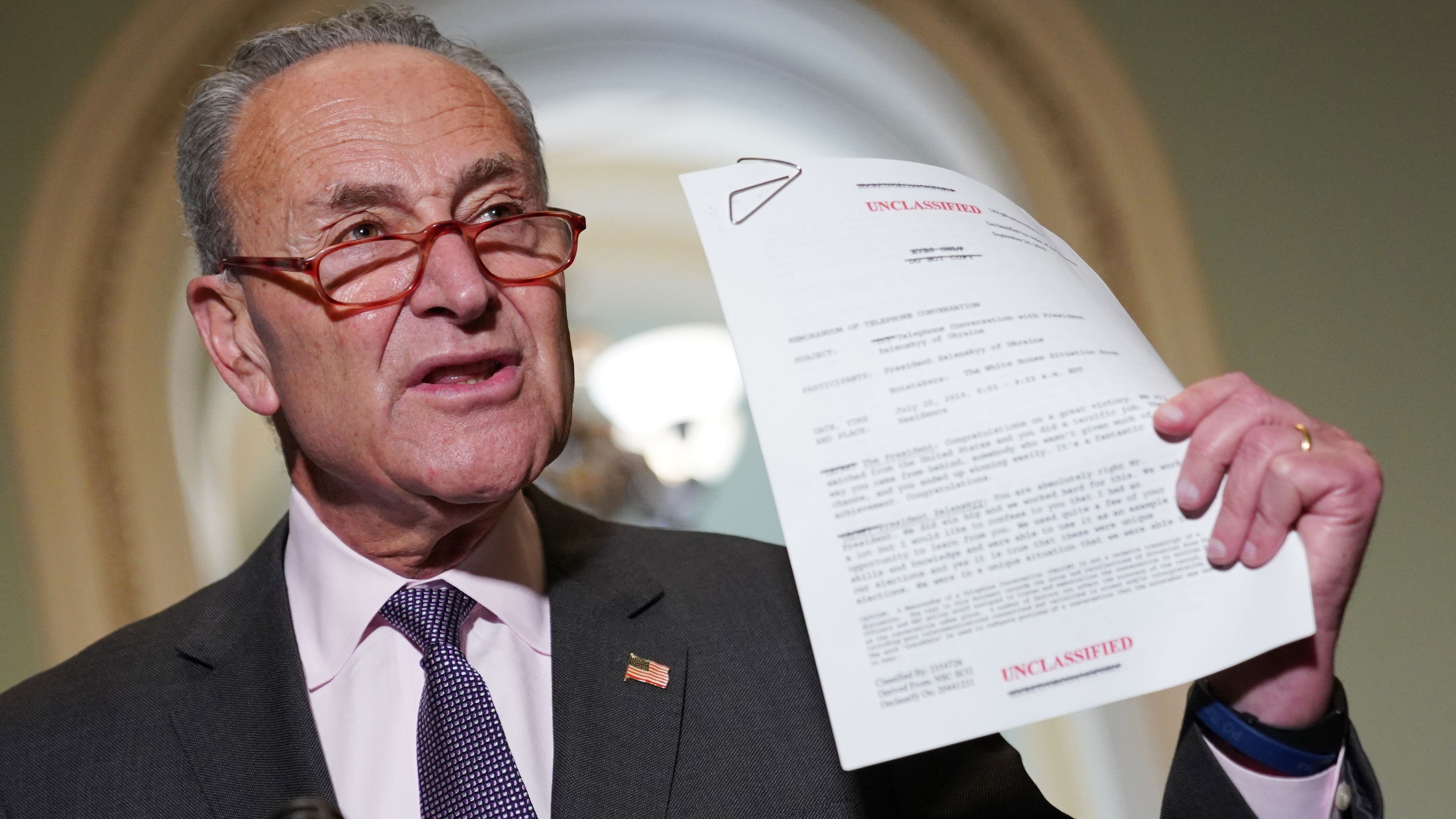 Well we finally got a look at President Trump's phone call with Ukrainian President Volodymyr Zelenskiy.

In case you need a refresher, we get into all that here. A day after an impeachment inquiry into Trump was announced because of said phone call, the White House released a 'transcript'. But it was more like a memo based on officials' "notes and recollections" from the call, so it's unclear if or what parts are missing. Trump and Zelenskiy talked for about 30 mins back in July, after Zelenskiy was elected president.

Here's what we learned from it…After some chit chat and congratulations from Trump on Zelenskiy's win, the Ukrainian president said 'can I maybe buy some US missiles?' In response, Trump asked Zelenskiy for "a favor." And said that Ukraine should work with Attorney General William Barr and Trump's lawyer Rudy Giuliani to investigate former VP Joe Biden and his son. Zelenskiy said once he appoints a top prosecutor, that person would look into it. Trump then doubled down on how Ukraine is "a great country."

Here's what we still don't know…If Ukraine's prosecutor has since looked into Biden. If Zelenskiy knew that Trump froze hundreds of millions of dollars in military aid to Ukraine days before the call. Why exactly the Trump admin waited until earlier this month to greenlight the aid. And even though Giuliani admitted he asked Ukraine to look into the Biden situation, there are still questions about what Barr's role was – if any – in all of this.

And how is Trump feeling about this?

Trump sees this as 'Witch Hunt: the Sequel.' He said he fully supports transparency and emphasized there was no evidence of a quid pro quo. None of this stopped him from meeting with Zelenskiy at the UN General Assembly yesterday, where Zelenskiy said 'leave me out of US politics'.

What about everyone else?

The Justice Dept reviewed the rough transcript and said it didn't look like the president violated campaign finance law. Some Republicans are backing Trump up. Others like Sens. Mitt Romney (R-UT) and Ben Sasse (R-NE) say the situation is "troubling." Democrats are working on their impeachment pump-up playlist.

This isn't the first time Trump has seemed to ask for foreign help against a political rival. But this appears to be the first known time that he's done that as president. All eyes are on how impeachment proceedings play out.

Skimm This: Our latest podcast ep covers what the impeachment process could look like.

Who's feeling more pressure than your Instant Pot...

Israeli PM Benjamin Netanyahu. Yesterday Israel's president picked Netanyahu to cobble together a coalition government. He has 28 days to do it. In last week's parliamentary election, Netanyahu's right-wing party pretty much tied with centrist Benny Gantz's. Others have lined up behind Netanyahu, but he's still shy of a majority. Now, he has four weeks to get a coalition together. After that, the president could give him a two-week extension. If not, Gantz could get a shot to see if he can make a gov.

Whose CEOs are seeing themselves out...

Juul. The head of the US's leading e-cig company is CEOut after weeks of bad PR. Hundreds of people in the US have suffered from a vaping-related lung illness. Multiple states (hi, Michigan, New York) banned flavored e-cig sales. The Trump admin has said it was working on rolling out a ban nationwide. The latest: California's warning people not to vape, period. And Massachusetts is banning all vaping products for four months. Meanwhile, Juul is hitting pause on US advertising.

eBay. The company you still hope will take your Beanie Babies is going through a bit of a crisis. That's because of a little company called Amazon. Example: Last year, Amazon's North America revenue alone was reportedly 13 times more than eBay's total revenue. Now, the company's doing some high-level shuffling and saying 'eBye' to its CEO.

While Mickey and Minnie are leaning into meatless...

Mattel is also getting inclusive.