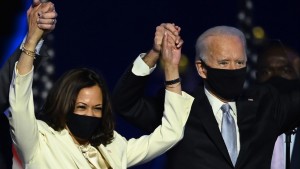 Joe Biden is now the president-elect of the United States.

Indeed. After a long few days of waiting for results, the race was finally called over the weekend. Biden reached the threshold needed to win with a projected 279 votes in the Electoral College. This was a historic election that drew a record number of voters even as a global pandemic worsened alongside it. Both he and President Donald Trump received more popular votes than any other candidate ever – with Biden's tally at over 75 million and Trump's at more than 71 million. Biden is the first candidate to beat an incumbent president since 1992. And is proving that the third time's a charm.

Because this was his third run for president after going for it in 1988 and 2008. Biden made a name for himself as Delaware's longest-serving senator and as VP for former President Obama's two terms. He campaigned this time on a number of issues, including combating COVID-19, expanding the Affordable Care Act, and passing the Equality Act to ban discrimination against the LGBTQ+ community.

Yes, but thin margins in key states like Arizona, Wisconsin, and a recount in Georgia show just how divided the country is on who should lead and what direction we should go. Plus Biden could face a divided Congress. Right now, Democrats are projected to keep control of the House, but with a smaller majority after losing at least seven seats to the GOP. The Senate still hasn't been called. But if Republicans keep control of it, Biden might have a hard time checking items off his agenda as he faces a worsening pandemic, high unemployment, and calls to confront the country's history of systemic racism.

So how did he clinch the win?

It was a close race overall, with both candidates maintaining their expected strongholds (Trump in the South, Biden in the Northeast and coastal states). But Biden won Wisconsin and Michigan – two key states that Trump won in 2016. And then Pennsylvania over the weekend, which put him over the 270 threshold. After the win was announced, celebrations broke out all over the country. And the rest is history. Speaking of...

No, she's speaking. Meet: Vice President-elect Kamala Harris. She'll be the first woman, first Black person, and first South Asian American to hold the VP title. She's also the daughter of immigrants. And a US senator repping California since 2017. To add to the historic nature of this win: it comes in the same year as the 100th anniversary of the ratification of the 19th amendment, which gave women the right to vote. One more time for the people in the back: over 200 years after the US's first presidential election, and 100 years after women were given the right to vote, we're finally going to see a female VP. Let that sink in. Harris spoke on Saturday and praised the many diverse women who helped pave the way for her to break a centuries-old glass ceiling.

So far, he's refused to concede. Instead claiming that he can still win, that the election isn't over, and that there'd been widespread voter fraud. Note: top election officials have not reported any widespread issues of fraud and the president has yet to bring any hard evidence to the table. His campaign is still disputing the results of several states, including calling for a recount in Wisconsin. And is threatening that more lawsuits are coming. Meaning: it's possible that this could end up in a long-drawn-out legal battle.

Wait...does Trump have to concede?

Legally, no. But it's part of the playbook 'How to Achieve a Peaceful Transfer of Power.' But Biden is already looking ahead: creating a new COVID-19 task force, and promising to rejoin the Paris climate deal and to reinstate the DACA program.

Americans faced a choice between two candidates who projected starkly different views for the future of this country. In the end, Biden's vision won out. The president-elect has called for unity and says he will be a president for everyone, regardless of how they voted. Time will tell if that helps heal a bitterly divided country.

Alex Trebek. Yesterday, the longtime "Jeopardy!" host died at the age of 80 after a battle with pancreatic cancer. Last year, Trebek revealed his stage 4 diagnosis, prompting a wave of support from fans. Born in Ontario, Canada, Trebek started his career in broadcast journalism before moving to the US and hosting several shows, including "Double Dare," "The $128,000 Question," and "Battlestars." But in 1984, Trebek landed his big break as the host of "Jeopardy!" – where he appeared in more than 8,000 episodes over 37 seasons. He became a household name and was known for his calm and kind demeanor toward contestants – and also for throwing shade once in a while. He won six Daytime Emmys and a Lifetime Achievement Award back in 2011. Canadian Prime Minister Justin Trudeau remembered Trebek as an "icon." RIP.

What's still up in the air…

The Senate. Right now, Republicans are clinging to the chamber as some races are too close to call. And it looks like the upper house's fate will remain in the balance for a bit longer as two Senate races in Georgia head to a runoff election in January. On the ballot: Incumbent Sen. David Perdue (R) and challenger Jon Ossoff (D). As well as Raphael Warnock (D), who's hoping to oust Sen. Kelly Loeffler (R). Right now, news outlets have Democrats and Republicans tied 48 to 48. And whoever wins in Georgia could help solidify control of the Senate – which has had a Republican majority since 2015.

Ethiopia. Last week, Prime Minister Abiy Ahmed launched a military operation in the country's northern Tigray region. Abiy claimed he launched the operation after the Tigray People's Liberation Front attacked a military base and tried to steal equipment. For days now, jets have bombed the region, with health officials reporting at least six people dead and 60 others injured. Many fear the country could be on the brink of a civil war.

Who's asking people to stay humble…