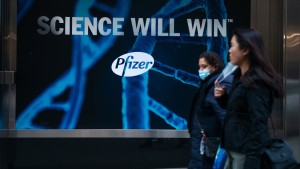 The US officially has a COVID-19 vaccine.

We all could – but it's not over yet. On Friday, the Food and Drug Administration approved Pfizer-BioNTech's coronavirus vaccine for emergency use. The formal blessing came amid a growing pandemic that's claimed nearly 300,000 lives in the US and has infected over 16 million people. Now, after months of trials and rigorous reviews, the gov's rolling out the Pfizer vaccine in the biggest vaccination effort in American history. Here's what you need to know:

Who gets the vaccine first?

The FDA's approval is for people 16 and older. But the CDC has recommended that the country's approximately 21 million health care workers and 3 million long-term care residents get priority. The states are likely to follow that rec. It's a two-dose vaccine, so after getting the first shot, people will have to get the second dose three weeks later.

Got it. And what about everyone else?

Gov officials have said there should be enough vaccines for everyone in the spring. And President-elect Joe Biden's vowed to distribute 100 million shots in his first 100 days in office. He could have a good shot at achieving that, since other vaccine options (hi, Moderna) could become available. Chains like CVS, Walgreens, and Walmart are also taking steps to distribute coronavirus vaccines – expanding access to people across the country.

How's this vaccine being distributed?

Trucks carrying the first shipments of the vaccine hit the road to all 50 states yesterday. And they're carrying quite the precious cargo. Think: dry ice containers to keep them at a very cold -94°F. Pfizer's expected to deliver 2.9 million doses for now, and the first batches could arrive at hospitals and clinics as early as today.

The FDA found "no specific safety concerns." And Pfizer has run tests that included about 44,000 people and found the vaccine's efficacy was consistent "across age, gender, race, and ethnicity." Like with other vaccines, some mild to moderate side effects are common: swelling, muscle pain, redness at the injection site, fatigue, and sometimes a fever. The FDA is advising that people with severe allergic reactions to any of the vaccine's ingredients hold off on getting the shot for now.

How much does it cost?

The gov's giving the vaccines for free. But providers (hospitals, clinics) can charge a fee for administering it. However, your insurer will be expected to pay those fees, and the federal gov will have a separate pool of funds for people who are uninsured.

Pfizer's vaccine approval is nothing short of historic – arriving less than a year after the pandemic struck the US. And it comes as the country has surpassed more than 3,000 COVID-19 deaths in a single day. Now, the work of getting people vaccinated begins.

Who made the final call…

SCOTUS. On Friday, it rejected a Texas lawsuit seeking to overturn the presidential election. Reminder: Last week, Texas AG Ken Paxton (R) sued Pennsylvania, Wisconsin, Georgia, and Michigan saying they acted unconstitutionally by expanding mail-in voting amid the pandemic. 17 Republican state AGs and President Trump supported the lawsuit. But the Supremes said Texas lacked standing and dismissed the suit. It was a blow to President Trump, who hoped a solidly conservative majority would take his side. It's the latest in the Trump campaign's fight against election fraud – something federal officials, including AG William Barr, say they're still waiting for evidence of.

These hacks. Yesterday, the Trump admin acknowledged that a group backed by a foreign government hacked into US gov networks, including in the Treasury and Commerce Departments. It's unclear what information was compromised, but the hackers reportedly had access to gov agencies' email systems. And officials believe the hacks could have started as early as spring, amid the pandemic and election season. Officials are investigating who is behind the hacks, but experts suspect a Russian intelligence agency. And say the breaches are connected to another hack on FireEye, a US cybersecurity company that works with the fed gov. It wouldn't be the first time Russia's been suspected. Just last week, the National Security Agency warned that "Russian state-sponsored actors" were exploiting flaws in gov networks. Russia has denied responsibility.

Brexit. Yesterday, the UK and the European Union extended their deadline on trade talks as the two iron out details to avoid a no-deal Brexit. PM Boris Johnson and European Commission President Ursula von der Leyen have been in talks for days and have often fallen to a stalemate on things like fishing rights, fair competition rules, and how to resolve trade disputes. If they can't work it on out, the UK would still bow out of the EU on December 31 but would have its trade rules set up by the World Trade Organization, which could mean more tariffs. Rubbish.

...Oh and in the US, President Trump signed a stopgap funding bill, snoozing a gov shutdown until the end of the week. Congress now has a few more days to debate a larger spending bill.

Charley Pride. Over the weekend, the country music star and first Black member of the Country Music Hall of Fame died at the age of 86 of complications from COVID-19. Pride's last performance was at the CMA Awards, where he received the Willie Nelson Lifetime Achievement Award. Dolly Parton remembered him as one of her "dearest and oldest friends." And many fans took to social media to honor and remember Pride. But some voiced their concerns that the singer may have gotten infected at the awards show (which was held indoors). The CMAs refuted the claims. RIP.

Who's apparently ready to make changes…

The Cleveland Indians. This week, the Major League Baseball team reportedly plans to announce it's dropping "Indians" from its title. The move comes amid backlash from fans and Native American groups who said the name was offensive.

What people have been waiting half a century for…

This code to be cracked.

Who's giving a shout-out to the real heroes…