2020 Census: What To Know About the Count 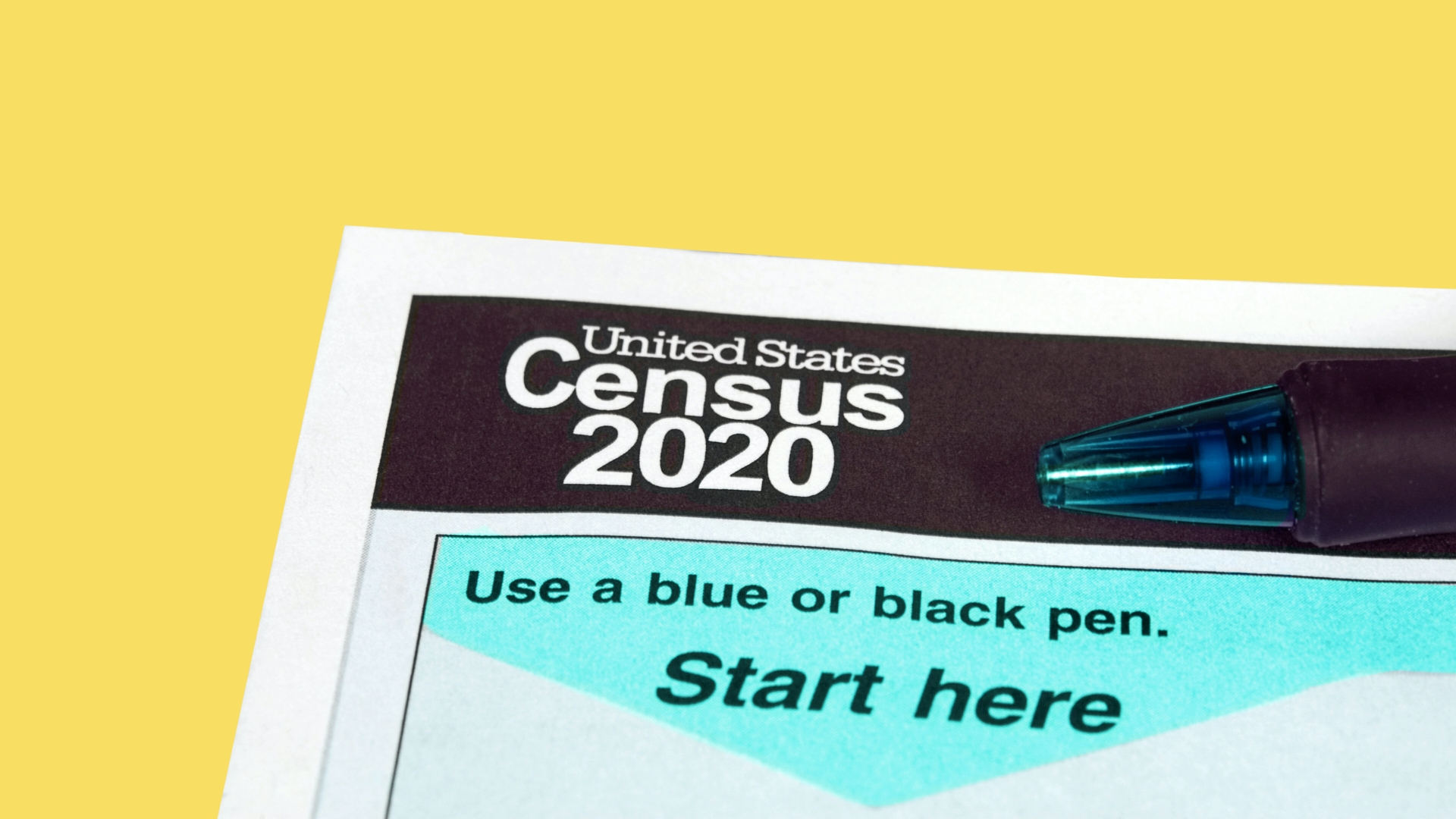 Time to count the 300 million-plus people living in the US. Buckle up.

The US’s census dates back to 1790, when the Founding Fathers wanted to get a headcount of everyone living in the US.

Democracy. More specifically, to figure out how to distribute seats in the House of Representatives among the states. The more people in your state, the more House reps your state gets. The Constitution requires an updated count every decade. The first census involved US marshals and “enumerators” (aka trained census assistants) going house to house and asking six questions about people’s gender, their relationship with the head of the household, and how many slaves lived there.

It was. US marshals kept running the show until the late 1800s, when there were reportedly concerns over inefficiencies given how rapidly the population was growing. So in 1902, the government created a permanent Census Office to oversee operations. Along the way, the questions have also gotten some edits. Example: in 1940 the gov asked people about their jobs and whether they owned or rented their homes to get a sense of the impact of the Great Depression.

This year’s census will be the first to ask whether people are in same-sex relationships (to prevent overcounting them, which has been a problem in the past). The process of counting the US population has gotten a little easier in recent decades, thanks to technological advances. And this year will be the first digital census (meaning you can respond online, whereas others have primarily been conducted by mail). It’s not so easy counting hundreds of millions of people…but it’s important.

Beyond House reps, census data is used to draw voting districts and determine how hundreds of billions of dollars in federal funding is distributed for things like schools, roads, hospitals, and other public services. Filling it out matters.

You might not remember the last census in 2010. The only things we remember from that year are “The Hills” finale and Lady Gaga’s meat dress. So here are the answers to all your questions about filling out this year’s census.

How do I fill this thing out?

By March 20, most households should get an invite in the mail from the gov telling you to fill out the census (btw, the entire census operation is funded by taxpayer dollars). You can do that by filling out the letter and sending it in via snail mail. Or, for the first time ever, you can fill it out online or over the phone by calling 1-800-354-7271. If you don’t answer the questions by May, a census worker will show up at your door to ask you questions. That IRL process takes place through July.

Census workers. Who are they?

The gov temporarily hires hundreds of thousands of civilians to do things like go door-to-door, help people respond, and clerical work at regional census offices. If a worker shows up at your door, they’ll carry an official government badge that has a picture, Commerce Dept watermark, and expiration date. But you can always check with your regional office to verify that they’re legit.

What questions will I be asked?

You’ll have to answer 12 questions about your living situation. They range from your name and telephone number to what kind of housing unit you live in (a house, apartment, mobile home, etc). Answer those Qs based on your living situation as of April 1, aka Census Day. There won’t be questions about things like your Social Security number or credit card numbers. Check out all of the questions and why they’re being asked here.

Do I have to respond?

Yes. You could be fined for refusing to answer questions or giving false answers, though it’s pretty rare for the penalty to actually be enforced. But since this directly impacts your representation in Congress and how much federal funding your community gets, experts encourage you to participate.

I have a roommate. Who should fill it out?

Whoever owns or leases your home. If both of your names are listed as the owners or on your lease, either one of you can fill it out. You don’t both have to.

Wasn’t there supposed to be a citizenship question?

Yes, but that’s not happening anymore. Last year, the Trump admin said it wanted to add a question on people’s citizenship status. It faced legal challenges, with critics saying it would scare minority and immigrant households into not answering the census at all, leading to an undercount of people living in the US. The Trump admin argued that asking about citizenship would help it enforce the Voting Rights Act, which was passed in the ‘60s to protect minorities’ voting rights. But the Supreme Court blocked the question from being added, and the Trump admin stopped pushing for it.

Once I fill it out, who gets access to my info?

The US Census Bureau. Your answers are confidential and legally can’t be shared with other gov agencies, including immigration officials. The bureau can only use the information in a limited number of circumstances, like to compile reports on certain trends.

Does every single person in the US get counted?

The law says everyone living in the US and its five territories (Puerto Rico, American Samoa, the Northern Marianas Islands, Guam, and the US Virgin Islands) has to be counted. That includes citizens, legal residents, and undocumented immigrants. In reality, not everyone is counted. Almost 75% of US households responded to the last census. This year, the participation rate is expected to be roughly the same. And a number of demographics are typically undercounted in the census. Two groups that face that problem are…

Other people who are typically undercounted include the homeless population (because they don’t have a physical address), renters (who are more transient), and those who are disabled (who may face challenges responding).

Will undercounting be a problem again this year?

Probably. Especially given potential tech issues that could arise with the first digital census. As well as possible interference. The government said it’s safeguarding its data and responses, but some testing was reportedly scaled back over inadequate funding, which potentially risks some people’s data from not coming in properly. On top of that, census officials said they’re working with social media companies (think: Facebook, Twitter) to combat any disinformation efforts that could encourage people not to fill out the census.

What does the gov do to prevent undercounting?

It’s tried to make the census more accessible. Like providing more ways to complete the census and making it available in 13 languages (versus six from last time). The US Census Bureau also launched a $500 million ad campaign to emphasize the significance of participating in the census. States like California even launched their own campaign. California faces a huge undercount given its homelessness crisis and the fact that Hispanics outnumber white people.

On Congress...the census can shift political power within the House of Representatives because the data is used to allocate House seats based on changes in population. This year, states like Texas, Florida, and Oregon are projected to gain seats, while Illinois, Ohio, and New York are expected to lose seats. If, for example, a Democratic-leaning state like New York loses seats, it could shift the power dynamic in the House, affecting whether legislation does or doesn’t get passed.

On voting…a state’s Electoral College is in part determined by the number of House reps each state has...which is based on how many people live there. So population counts determined by the census are a factor in how much sway your state may have in presidential elections. Meanwhile, state officials may use census data to redraw electoral maps depending on where people live. Some state legislatures are guilty of gerrymandering – aka redrawing maps to benefit their political party. It essentially stacks the party’s supporters in many districts, giving the party an advantage at the polls. Tech advances have helped with more accurate census counts, but that’s reportedly caused the gerrymandering process to become more targeted and sophisticated.

On communities...census data also has lasting impacts on your local community. Because it determines how much federal funding your town gets, it can alter whether a road gets repaved, or whether a public school gets textbooks. And businesses can use census data on town demographics to decide whether they’ll build offices or factories in certain towns, which could create more jobs and help boost local economies.

The census is a huge undertaking. One that delivers a treasure trove of info about the makeup of the country at different points throughout history, impacts daily life in America, and affects how the most important issues in your state are repped in Congress. It can take minutes to fill out a questionnaire that has lasting impacts for at least the next 10 years.