Daily Skimm: Attack on the US Capitol, the Georgia Runoffs, and a Lockdown Heist 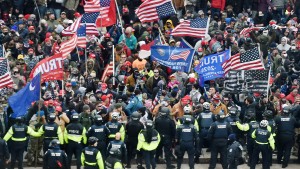 The United States has been attacked.

What did we just live through?

An assault on democracy. Yesterday, as Congress gathered to certify President-elect Joe Biden's electoral win, a mob of Trump supporters stormed the US Capitol: scaling walls, shattering windows, breaking into federal offices, taking over the Senate floor, and stealing furniture. Lawmakers were evacuated and the Capitol was put on lockdown. Four people died. Multiple officers were injured. Videos show groups attacking the press, destroying equipment, and yelling an all-too-familiar message from the president himself: the media is the "enemy of the people." The National Guard was eventually called to quell the rioters. At least 52 people were arrested.

I still can't believe this happened in the US.

It did. And it was the first major attack on the Capitol since 1814 – when the British burned it down during the War of 1812. Many are blaming President Trump. For months, he's rallied supporters to believe that the election was rigged despite all evidence to the contrary. And made comments in the past that were perceived as inciting violence (see: this, this, and this). At a rally yesterday, he vowed to "never concede" and urged his supporters to march to the Capitol, telling them "you will never take back our country with weakness." His personal lawyer, Rudy Giuliani, pushed for a "trial by combat."

And what did Trump say about the violence?

While his Congress barricaded in the Capitol, the president released a video. He told the rioters that they should go home, but "we love you, you're very special." He later added this is what happens when "a sacred landslide election victory" is "viciously stripped away from great patriots." The posts were removed by social media outlets. And he has been temporarily banned from Twitter and Facebook.

Lawmakers across the aisle are condemning the violence. Biden said it "borders on sedition" (inciting rebellion against a gov). And activists are calling out the stark discrepancy in police response compared to Black Lives Matter protests. The day's events also seemed to deliver a jolt to the Republican Party, inspiring some longtime Trump allies to speak out forcefully. VP Mike Pence resisted pressure by Trump to defy the Constitution and reject the electoral results. Sen. Lindsey Graham (R-SC) called Trump a "consequential president" but said Biden will be "the legitimate president of the United States." Sen. Mitch McConnell (R-KY) said if the election were overturned, it would send US democracy into a "death spiral." Some lawmakers are calling for impeachment or an early removal of Trump from office. And while several Republicans backed off their challenge to the election results, others pushed on – to no avail. In the early hours of the morning, Pence officially declared Biden the winner of the Nov 3 presidential election. And Trump – for the first time – acknowledged he will leave the White House, adding that there would be an "orderly transition" of power.

We live in a democracy. A democracy that has been in place for centuries – allowing us the right to vote and ensuring a peaceful transfer of power. Yesterday's events showed how fragile that is. And the damage that can be done by a president unwilling to protect it.

On That Blue Train to Georgia

In the midst of chaos and uncertainty in DC, things became clear in Georgia. Democrats won both of Georgia's Senate seats for the first time in nearly two decades. And have essentially won the majority in the US Senate for the first time since 2014. Here's what you might have missed...

Yesterday, news outlets confirmed Democratic candidate Jon Ossoff beat incumbent Sen. David Perdue (R) in a high-stakes runoff election. The 33-year-old Georgia native will be the youngest senator in 40 years. And GA's first Jewish senator. His win was the second Dem victory this week after Rev. Raphael Warnock's historic election as Georgia's first Black senator. Now, Senate control is tied 50-50 between Republicans and Democrats. Meaning, VP-elect Kamala Harris will act as a tie-breaker once inaugurated. And while the Dems' majorities in the House and Senate are narrow, they'll help drive the Biden admin's legislative agenda on things like climate change and health care.

Turnout in Georgia was record-breaking, with more than 4 million ballots cast. But one name is resonating as loud as the winners': Stacey Abrams.

Breonna Taylor's. Earlier this week, the Louisville Metro Police Department fired two more officers involved in Taylor's shooting death back in March. A detective was fired for shooting 16 rounds into the 26-year-old's home and failing to activate his body camera. And the other officer for failing to follow proper protocol in obtaining the search warrant that led to the raid. The firings came months after the Kentucky AG said no officers would be directly charged in Taylor's death. And as the police dept got a new chief who said she's focused on "rebuilding community trust." The Louisville police union called the firings "unjustified." The officers could appeal.

The EU. Yesterday, its medicines agency gave Moderna's coronavirus vaccine the go-ahead, providing the 27-nation bloc with a second vaccine option. And has secured up to 160 million doses of it (enough for 80 million people). The move came as countries like Germany and Italy have extended or plan to extend restrictions, and as more countries (think: the Netherlands, France) face criticism for their slow vaccine rollout.

Who's being called back...

Judge Merrick Garland, apparently. Today, the DC federal appeals court judge is expected to be nominated as President-elect Joe Biden's attorney general. In 2016, Garland was President Barack Obama's Supreme Court pick – but Republicans shut that down arguing a SCOTUS seat shouldn't be filled in an election year. (How ironic.) This time, the odds are likely to be in Garland's favor.