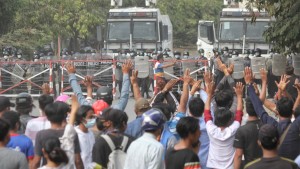 Protests in Myanmar have turned deadly.

Earlier this month, the Myanmar military arrested civilian leader Aung San Suu Kyi, declared a state of emergency, took power, and temporarily shut off the internet. The junta (aka the country's military) claimed this was all in response to last year's alleged fraudulent elections. And charged Suu Kyi with illegally importing walkie-talkies (yes, walkie-talkies) and breaking coronavirus restrictions. Citizens have taken to the streets in peaceful protest – including using things like balloons, pots, and pans to express their discontent. Over the weekend, protests there took a turn after security forces shot and killed two people – raising the death toll to at least three. All of this has only added to Myanmar's troubled history.

For nearly 50 years, Myanmar (aka Burma) was under oppressive military rule. But in 2011, the military ended its control, opening the door to a civilian gov. The country, which had seen high rates of poverty and longstanding conflict between the military and the country's ethnic minority groups, began to try its hand at democracy. But the military still maintained control over parts of the gov (25% seats in parliament and total control of Defense). In 2017, things took another turn.

After an attack by a Rohingya insurgent group, the military cracked down on Rohingya Muslims. Thousands were raped, killed, and their villages burned down, forcing more than 700,000 Rohingya Muslims to flee to neighboring Bangladesh. The UN described the violence as ethnic cleansing. But Suu Kyi defended her military's actions in front of the International Court of Justice – the UN's highest court. She called the allegations "misleading" and stood by the junta. Now, after a decade of democracy, Myanmar is back under military rule.

The international community has condemned the violence. Earlier this month, President Biden ordered sanctions, targeting junta leaders and limiting the military's access to $1 billion of Myanmar gov funds being held in the US. And he and the UN have called for Suu Kyi's release. But the military's saying 'this isn't a coup,' and that the country's constitution allows them to step in during an emergency. They say the state of emergency will stay in place for at least a year, and they will hold new elections but didn't give a date.

After decades of military rule, many thought the country was moving toward democracy. But the military coup seems to be upending that. Now, the military's treatment of protesters has turned violent and has the international community worried.

Where Americans are still struggling...

Texas. The state is in recovery mode after last week's storms left more than 30 people there dead. An estimated 10 million people still do not have access to drinkable water. Thousands are without power. And some who do are being charged thousands of dollars for basics like heat. On Saturday, President Biden approved a major disaster declaration for dozens of Texas counties. It opens up federal dollars that can be used toward home repairs, temporary housing, and property losses. But there's more:

The US. This week, the country's coronavirus death toll could reach 500,000 people – a grim milestone that no other country is even close to. Already, the death toll from COVID-19 has surpassed American lives lost in WWII and the Vietnam War combined. But it comes as the country is seeing new cases decrease and amid the largest vaccination effort in history. Despite all that, Dr. Anthony Fauci said it's "possible" that Americans will still have to mask up next year, especially amid more contagious coronavirus variants.

Israel. Yesterday, parts of its economy hung up the 'open' sign as malls, gyms, hotels, and theaters welcomed customers in. But the gov's saying 'show me your vaccine pass.' Nearly half of Israel's 9 million citizens have received at least one dose. And the gov found that Pfizer prevents nearly 99% of coronavirus deaths or hospitalizations among people who got both doses. Now, Israel's taken one big step toward getting to a new normal, and is aiming to reopen more of its economy in the coming weeks. It comes as the country has faced criticism for prioritizing its own citizens over people in Palestinian territories

Malcolm X. On Saturday, his family released a letter alleging that the FBI and NYPD were involved in his death. In 1965, the Black civil rights leader was shot to death in Manhattan. Three men were convicted of his murder, but two have maintained their innocence and scholars have raised doubts about what really happened. Last year, the NYC district attorney said it would review Malcolm X's case, following a Netflix docu-series on his death. Now, the family's citing an alleged letter written by a deceased former NY police officer, who claimed authorities conspired in Malcolm X's assassination. The Manhattan DA's office said their review is "active and ongoing." But the NYPD said 'we gave you all the info we got,' and the FBI has stayed silent on the news.

Who had a great weekend...