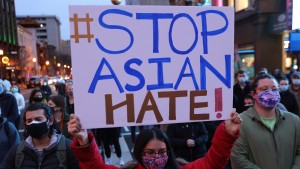 This week's deadly shootings in Atlanta are raising major concerns.

On Tuesday, a gunman killed eight people at three spas in or near Atlanta, Georgia. Six of the victims were women of Asian descent. Authorities arrested the suspect – a 21-year-old white man – and charged him with eight counts of murder. The news rattled the entire country, especially after major cities saw a rise in anti-Asian hate crimes last year. But the suspect's alleged motive, and the sheriff's spokesman's remarks, also sparked outrage.

Yesterday, authorities said the suspect claimed to have a "sexual addiction" and that the spas were a "temptation" for him that he had wanted to "eliminate." County sheriff's Capt. Jay Baker told the press it seemed the suspect was "at the end of his rope" and that Tuesday was "a really bad day for him and this is what he did." The statement stunned Americans, who saw the language as showing more sympathy for the suspect than for his victims. It's not the only thing Baker's getting backlash for – he's also reportedly been accused of sharing racist Facebook posts. Let's dive into some of the concerns:

Language matters…Authorities and some lawmakers argue there's not enough evidence (yet) to call the shootings a 'hate crime.' But communities are calling bullsh*t. And saying an attack that left six Asian women dead and targeted Asian-owned businesses screams 'hate crime.' Especially in Georgia, which passed a new hate crime law over the summer – after Ahmaud Arbery's death – penalizing crimes motivated by a victim's race, sex, national origin, and more.

Discrepancies in policing...The gunman was arrested unharmed and questioned. Just as we've seen with many white male suspects, including mass shooters and Capitol rioters. But police encounters with Black men and women – including George Floyd, Breonna Taylor, Daniel Prude, and countless other Black Americans – suspected of doing far less than murder (or even nothing at all) disproportionately end in death.

Perpetuating stereotypes…The gunman's comments have raised speculation about the women's employment – which some Asian Americans say is perpetuating the sexual stereotypes and fetishization of Asian women. Experts say this can lead to the objectification of Asian women, increasing the risk of violence and sex trafficking. Atlanta Mayor Keisha Lance Bottoms (D) said she wouldn't get into "victim blaming, victim shaming."

There is no excuse for the deadly violence against Asian women in this country – and the broader Asian American community. None.

What's got people pulling out their high school science books…

Lab-made pre-embryos. Yesterday, two separate research papers revealed scientists created living structures that resemble human embryos for the first time ever. Known as "blastoids," the clumps of cells are similar to blastocysts, which form after an egg's been fertilized. Here's how they were made: Scientists used stem cells or reprogrammed skin cells and grew them in lab containers. Sprinkle in some biochemicals, and there you have it: pre-embryos that look just like the real thing. Except scientists say they likely aren't viable.

...Oh and speaking of firsts in science, a (Moderna) vaccinated pregnant woman gave birth to a healthy baby girl with antibodies against the coronavirus.

PS: When it comes to the complicated topic of fertility, we have guides that can help. Here's what you need to know about egg and embryo freezing and treatments like IVF and IUI.

Japan. Yesterday, a court there ruled that not allowing same-sex marriage is unconstitutional. Japan's constitution defines marriage as "mutual consent of both sexes." It's been interpreted to mean that marriage is only between a man and a woman. In 2019, several couples filed lawsuits demanding damages for the pain they suffered for not being able to marry. The court said 'no' to that. But ruled that not recognizing gay marriage violates anti-discrimination laws since sexual orientation is not a choice.

...Oh and, speaking of positive news for the LGBTQ+ community: Marvel Comics is introducing its first gay Captain America.

Who's pulling up a chair above the glass ceiling…

Katherine Tai. Yesterday, the Senate unanimously approved Tai to be the US Trade Representative – making her the first-ever Asian American and first woman of color to be in that role. She helped negotiations between the House and the Trump admin over the US-Mexico-Canada Agreement. In her new role, Tai will be tasked with maintaining the US's strong stance on China and reviewing Trump-era trade policies.

The IRS. Yesterday, it moved the Tax Day deadline to May 17, citing the pandemic.

Psst...that means more time to report any side money you earned in 2020. We Skimm'd how to do taxes when you're your own boss.

While some will be taking cruises…

Others are sticking to Zoom.