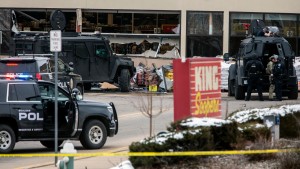 There's been another mass shooting.

Yesterday, a gunman opened fire at a grocery store in Boulder, Colorado, killing 10 people. That included 51-year-old police officer Eric Talley, who was praised for his heroic action in responding to the attack. A suspect was arrested and taken to the hospital for injuries. Officials are still investigating the motive, and are getting help from the FBI. The district attorney said they've launched a "painstaking investigation" and wants action beyond thoughts and prayers.

It is. And it comes on the heels of last week's Georgia shootings, which left eight people dead – six of them Asian women. The Boulder County DA called yesterday's violent act a "tragedy and a nightmare." President Biden hasn't commented, but the White House said he's been briefed on the tragedy – which sadly isn't the first Coloradans have experienced in their lifetime.

I have no words.

According to Everytown, a gun safety nonprofit, more than 100 Americans die at the hands of guns every day. One analysis found that 2020 had the highest number of gun-related deaths in decades. President Biden has promised to put an end to the "epidemic of gun violence" – calling on Congress to enact certain reforms like banning assault weapons and requiring background checks. Earlier this month, the House passed two bills on the matter. Now it's up to the Senate. But regardless of what happens with Congress, there are also state-specific gun laws.

What do we know about Colorado's?

They allow people to carry guns into businesses as long as they're in "plain view." But in 2019, Kroger – this grocery store's parent company – asked customers to leave them at home. The latest: this month, a judge blocked Boulder's two-year city-wide assault weapons ban, saying gun laws are up to the state. It's unclear which gun the assailant used but some reports described it as an AR-15-style rifle.

The US has lost 18 people to mass shootings in six days. And once again, Americans are in the position of grappling with their gun laws while reeling from tragedy.

Who's sending a message...

The US, UK, EU, and Canada. Yesterday, they sanctioned several Chinese officials for the country's treatment of Uyghurs – a minority Muslim group. Since 2016, an estimated 1 million or more Uyghurs have been detained in "re-education" camps in China's Xinjiang region. China's consistently denied the allegations of human rights abuses, describing the camps as training centers. And the International Criminal Court (ICC) decided not to investigate the claims. But now, the US and others are putting their foot down. The sanctions target at least four senior officials in Xinjiang, freezing their assets and banning them from travel.

The US-Mexico border. Since last month, immigration officials have encountered over 100,000 migrants there – the highest number since 2019. And the number of unaccompanied migrant children has reportedly surpassed 15,000. All of this (plus COVID-19 restrictions) has led to overcrowded facilities, reports of inhumane conditions, and criticism from both sides of the aisle. Now, federal guidelines have reportedly let border patrol agents release about 150 migrants without a court date – an unprecedented break from immigration policy. And some migrants reported they were released without being told how they'd be contacted, raising concerns about how they'll make it to court (which could determine if they get asylum).

Saudi Arabia. Yesterday, it offered Houthi rebels in Yemen a cease-fire deal. In 2015, a civil war broke out between the Iranian-backed Houthis and Saudi-backed Yemeni gov. It's led to a humanitarian crisis, more than 230,000 deaths, and pushed Yemen to the brink of a famine. Now, Saudi Arabia says it'll reopen the international airport and a shipping port in Yemen – moves that could generate much-needed income in the country. In exchange, the kingdom wants the Houthi rebels to agree to a UN-supervised cease-fire. But the Houthis said 'lift the blockade and then we'll see.' The UN and US welcomed the move

What could have climate change activists singing 'baby shark'...