Daily Skimm: It's Earth Day, Everyone 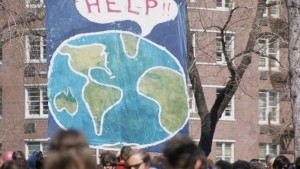 It is. Since the first Earth Day in 1970, the US has set up multiple agencies (hi, EPA and NOAA) and legislation (hi, the Clean Air and Water Acts) to tackle environmental concerns. But climate change has remained a problem. Since 1880, the average world temperature has gone up a little over 1°C (2°F) – most of that rise coming since 1975. That may sound small – but so far, the change has already contributed to stronger and more frequent extreme weather events, like hurricanes, wildfires, and droughts. Make no mistake: Human activity is largely to blame. And despite scientists and activists ringing the alarm, governments are still falling behind.

I work well on deadline.

Then here are some key dates to keep in mind. The world's top climate scientists have said the global average temp will likely reach 1.5°C (2.7°F) above pre-industrial levels between 2030-2052. The threshold could further tip the balance in extreme weather events and lead to increased poverty and loss of species. And a UN agency says there's a small chance (20%) that the tipping point can happen even sooner...by 2024. So here's what needs to happen, now:

Governments...Scientists say limiting the world's temp requires "far-reaching transitions in energy, land, urban and infrastructure" systems to cut down on emissions. And economists have said carbon taxes are the best way to limit the planet's warming. Investments in all-things electric (cars, housing) – as well as in solar and wind energy – can also help reduce reliance on coal, oil, and other emissions-heavy fuels.

Businesses…Companies like GM, Volvo, and FedEx are getting electric feels when it comes to vehicle production. Electric vehicles can reportedly emit 64% less carbon emissions than petrol cars. Appliance manufacturers can also play a role. In the EU, the "right to repair" law aims to make household appliances more energy-efficient and durable so that waste is kept to a minimum. And other companies should take a look into going carbon neutral (or negative) and reduce their footprint – like Apple, McDonald's, Microsoft, and more have pledged.

Individuals…need to take a serious look at their habits. That includes reducing meat consumption, since livestock accounts for over 14% of global greenhouse gas emissions. Here are some tips to help your plate go green. The reviews are also in on transportation – things like aviation, cars, trucks, and buses account for 24% of global CO2 emissions. Whenever you can, consider things like carpooling, walking, and biking. And be conscientious with what you buy and waste. We have more tips below.

Can we really make a difference?

Yes. It may already be too late to keep global temps below the 1.5°C threshold. But there are even worse predictions in store for the 2°C threshold we could meet if we don't take action now. Keep in mind: the harms of climate change disproportionately affect developing countries, with 143 million people estimated to become climate migrants by 2050. Here's one way you can donate to help people affected by climate-related disasters.

We have one Earth. And it needs help. Now.

Fighting climate change is a team sport. Here's how countries are stacking up:

A+…Few countries are doing enough to meaningfully combat the threats from climate change. The UK is meeting its Paris climate deal targets. Morocco and Gambia have set themselves apart by working toward a global warming of no higher than 1.5°C. Sweden is pushing for net-zero greenhouse gas emissions by 2045 using carbon capture – tech efforts to keep released CO2 from entering the atmosphere. And Denmark has one of the world's most ambitious goals, to slash emissions by 70% by 2030 – though it's struggling to get there. Here are some other countries that make Captain Planet cautiously optimistic.

Middle of the pack...the Paris climate deal. 196 countries signed on to the 2015 agreement. But there are two general critiques: one, that the deal isn't ambitious enough (think: even if all countries met their goals, estimates say the world would still warm up beyond 2°C). And two, that even still, countries are failing to meet these goals. France's gov planned to meet its Paris climate goals in part by raising carbon taxes – but the disproportionate cost to low-income earners sparked the yellow-vest protests, and the government ultimately hit reverse. Germany is another example. For years it was ranked at the top of the pack. But it's been struggling to expand renewable energy and reduce emissions – largely due to its influential car sector.

Fail...China, the US, and Russia. These three are some of the biggest emitters of CO2. Because they're highly industrialized, together they're responsible for about half of the world's carbon emissions. China's the biggest contributor of greenhouse gases, with its massive coal production believed to account for more than 50% of the world's coal-fired power. It saw a (very) slight dip in 2020 because of the pandemic lockdown. But things are right back to square one. Meanwhile, Russia's a major exporter of petroleum used for gasoline, kerosene, and diesel. Then there's the US...

The US is the second-largest emitter of greenhouse gas. But its approach to climate change has shifted with each administration. Here's what President Biden's is doing about it:

The actions...Biden officially rejoined the Paris climate deal. And teamed up with China to commit to net-zero emissions and green energy funding, but TBD if it's a commitment that brings change. Biden also signed an executive order directing cabinet secretaries to reach net-zero emissions by 2050. And proposed a $2 trillion infrastructure plan that, in part, could boost the number of electric vehicles and build a clean energy grid. But he's not going as far as adopting the Green New Deal – a 10-year plan that progressives believe is critical to reduce the threats of climate change. So they relaunched it earlier this week.

The Cabinet...Biden called for backup. So he brought on former Sec of State John Kerry – who helped craft the Paris climate deal – to serve as special presidential envoy for climate. He also brought on Interior Secretary Deb Haaland, who's committed to "strike the right balance" between energy development and conservation. Michael Regan, who was North Carolina's top environmental regulator, is now serving as EPA lead. In that role, he plans to limit car and truck emissions and work to reduce climate problems low-income communities are already disproportionately facing. And then there's former EPA chief Gina McCarthy. As national climate advisor to the president, she'll spearhead the climate task force to push Biden's climate agenda government-wide.

The divide...Most of Biden's plans will need congressional approval. Road block, because Republicans and Democrats aren't exactly seeing eye-to-eye on climate change. Most Dems say it's a "global emergency." Last year, Republican leadership proposed their own plan for combating climate change – including planting a trillion trees and tax breaks for companies that use carbon capturing tech. But scientists say it's far from what's needed. With the Senate split 50-50 and Dems holding only a slight majority in the House, going green could be an uphill battle.

Some good news...Americans are starting to get on the same page. One study this year found that 53% of registered voters considered global warming a "high or very high priority." And they're vocal about how they want it done. 88% said they want tax incentives for businesses and homeowners to become more energy efficient. Despite this, there's been infighting between lawmakers over how to handle it, especially between moderates and progressives on the Green New Deal – a proposal 20% of Americans support. But even small individual contributions can go a long way.