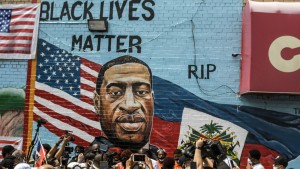 The Whole World Is Watching

Last year, families of Black Americans urged the UN to investigate the police killings of their loved ones. The request came amid racial justice protests following George Floyd's murder. But the UN had a rocky relationship with the Trump admin, and was pushed away from investigating the topic. So, a coalition of human rights lawyers and human rights experts from 11 countries carried out an independent probe into America's policing. Earlier this year, it held public hearings on 43 cases of Black Americans who died at the hands of police, as well as one case in which a person was left paralyzed. And last month, the coalition released its 188-page report.

That the deadly police killings of Black Americans could amount to crimes against humanity. And that police's "severe deprivation of physical liberty" and use of chokeholds amount to torture – a human rights violation under international law. They also called out other practices, including traffic stops targeting Black Americans, racially motivated stop-and-frisk, and disproportionate use of deadly force against Black people (both from guns and Tasers). Experts claim that America operates on two different justice systems: one for white people and one for Black people. But that's not all.

The report revealed the emotional toll this has had on Black families, as experts reviewed the cases of Floyd, Eric Garner, Tamir Rice, Michael Brown, Freddie Gray, Breonna Taylor, and dozens of others killed at the hands of police. It's a toll only made worse by the rarity of police convictions. Investigators found that only 35 police officers have been convicted in the roughly 15,000 deaths by law enforcement since 2005. They blame the US's "culture of impunity" – where police officers don't fear accountability for their actions. And the ones who get caught are waved away by police unions, lawmakers, and the general public as just "a few bad apples."

Human rights experts are urging the UN's International Criminal Court (ICC) to investigate America's policing and prosecute any human rights violations. And want the US gov to support demilitarizing and reforming the police by passing a few measures. That includes: the BREATHE Act, the George Floyd Justice in Policing Act, and others that require independent investigations. They're also calling for an end to qualified immunity, as well as a ban on no-knock warrants and chokeholds. The US and the ICC have yet to respond. But the US isn't a member of the court so it may not recognize a ruling. Much of the report's recs would also require Congress's action.

The treatment of Black Americans by police is no longer a domestic issue. Human rights experts are making it clear that the whole world is watching – and it is horrified by what it sees.

Why imminent change is needed…

Andrew Brown Jr. The FBI has opened a federal civil rights investigation into the 42-year-old Black man's death. Last week, sheriff's deputies shot and killed Brown in Elizabeth City, NC, as they tried to serve a search warrant at his home. An independent autopsy found Brown was shot four times in the arm and once in the back of the head as he tried to drive away from police before he crashed into a tree. Earlier this week, Brown's family saw 20 seconds of one deputy's body cam video. But authorities have yet to share more details on what led up to the shooting or release body cam footage publicly. Now, the FBI is looking into whether what happened violates federal law. Meanwhile, the city is under a state of emergency and curfew as protests there continued for the seventh day.

The US. Yesterday, the CDC eased masking recommendations for fully vaccinated people outdoors. Now, health officials say that those Americans no longer need to wear a mask outside except in crowded areas. And they don't need to cover up when dining with friends at outdoor restaurants. Reminder: a person is considered fully vaccinated two weeks after getting their one dose of Johnson & Johnson or their second dose of Pfizer or Moderna. More questions? We've got you.

...Oh and speaking of changes, DHS said it won't enforce the Real ID requirement for air travelers because the pandemic has made it harder for people to get to the DMV.

PS: If you're feeling anxious about the world returning to 'normal,' you're not alone.

What the Biden admin's has on the agenda…

Minimum wage. Yesterday, President Biden signed an EO raising the min wage for federal contract workers to $15 an hour. The hike's set to take effect in March, which could mean bigger paychecks for thousands of fed workers (who are currently at $10.95/hour). Admin officials believe the change will address income inequality and boost productivity and morale among contractors. But Republicans and some moderate Dems think the raise will lead to job cuts.

What new parents should pay attention to...

Their baby's bedding. In a study released this month, researchers said that between 2011 and 2017, 75% of sudden unexpected infant deaths (SUIDS or SIDS) were because of soft bedding. Safe-sleep guidelines recommend not using pillows, blankets, and other items that could increase the risk of "entrapment, suffocation, or strangulation."

What Ross Geller can appreciate…