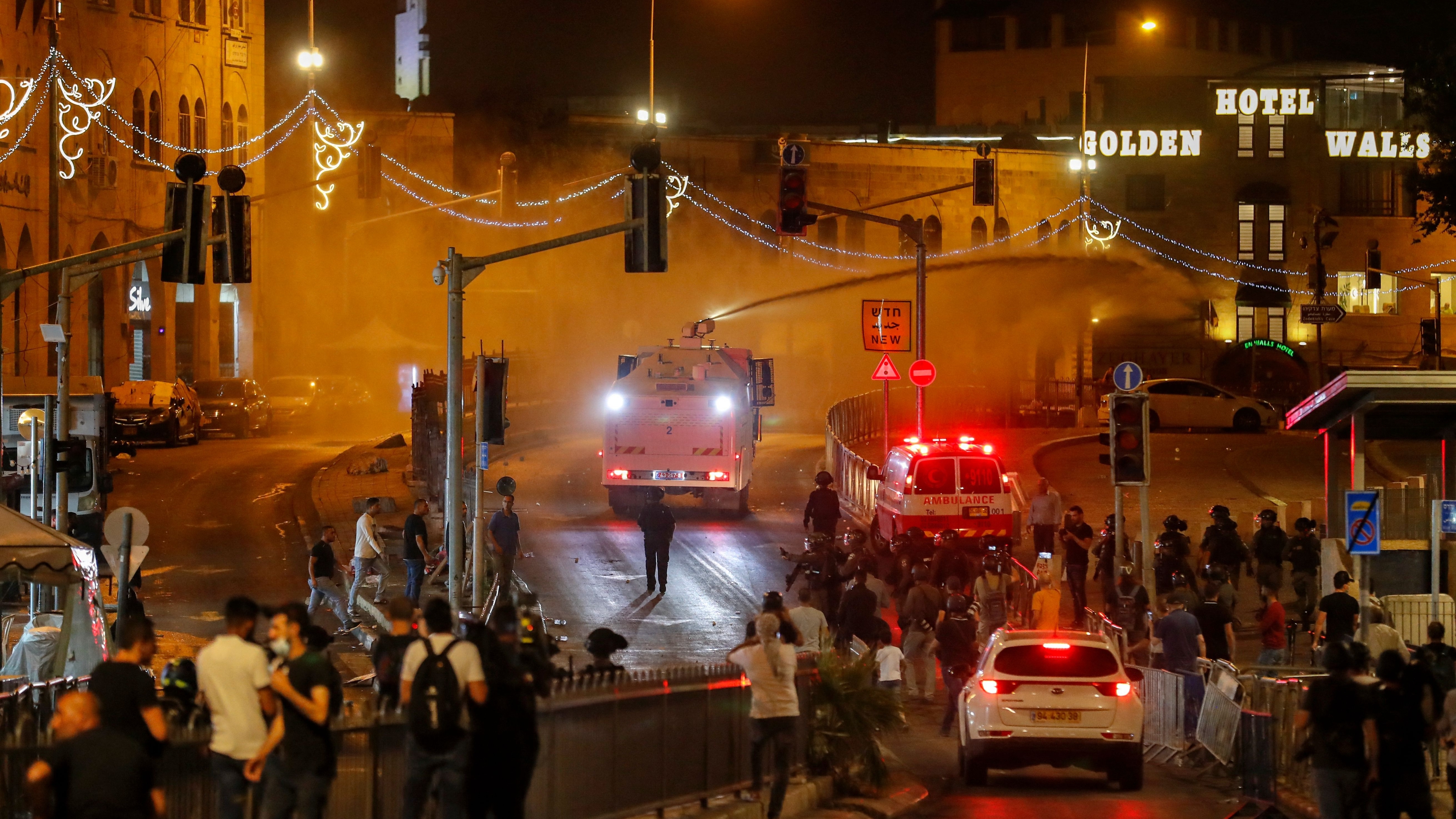 Violence is escalating in East Jerusalem.

A land dispute and possible evictions. Since the 1950s, Palestinian families – mostly refugees – have been living in the East Jerusalem neighborhood of Sheikh Jarrah. But Jewish settlers consider it their ancestral land. And point to a 1970 Israeli law that allows Jews to reclaim land they owned before the 1948 Arab-Israeli war. Israel's Supreme Court delayed its ruling on the possible evictions after the attorney general asked for time to review the case. A new hearing date could be set within 30 days. In the meantime, the fate of about 70 Palestinians still remains uncertain. And tensions are high.

It's the worst violence there in years. After weeks of hostility, clashes between Israeli police and Palestinians broke out over the weekend at the Al-Aqsa Mosque – where tens of thousands of Muslims prayed on Ramadan's holiest night. Hundreds of Palestinians and Israeli police were injured as officers fired rubber bullets to disperse protesters throwing stones and fireworks. Hamas – the US-designated terror group that runs Gaza – launched a rocket into Israel. Israel responded by striking a Hamas military post. Today, the violence continued on Jerusalem Day – an Israeli national holiday.

Israeli Prime Minister Benjamin Netanyahu defended the police's handling of the protests, saying Israel's upholding "law and order." But the international community is ringing the alarm: The Biden admin says it's "extremely concerned." And the UN has warned that any evictions could be considered a "war crime." It all comes as political leadership in the region is in limbo. Late last month, the Palestinian Authority's president indefinitely delayed the first planned elections in 15 years. And Israel, which has now gone through four elections in two years, still doesn't have a coalition gov in place.

The dispute over land in East Jerusalem is a flashpoint in the decades-long territorial conflict between Israelis and Palestinians. And without strong, democratically elected leadership on both sides working toward peace, progress isn't looking likely.

Whose case is making headlines…

Ledell Lee's. In 2017, the 51-year-old Black man was executed in Arkansas for the 1993 murder of Debra Reese. Lee had consistently maintained his innocence. And despite civil rights orgs and Lee's lawyers pushing for more DNA testing in the case, the judge said 'not necessary.' But on Friday, the Innocence Project and the ACLU released a report saying newly discovered DNA evidence on the murder weapon doesn't belong to Lee. Arkansas' attorney general maintains the original evidence (which relied heavily on eyewitness testimony) proved Lee was guilty "beyond any shadow of a doubt." But Lee's family says they "remain hopeful" there will be more info uncovered in the case. As for the newfound DNA, it's being added to a national criminal database but hasn't been matched to anyone yet.

What's got people looking into a firewall…

Another ransomware attack in the US. Over the weekend, a cyberattack on one of the US's biggest pipelines led to what could be one of the largest disruptions on energy infrastructure in US history. The operator of the pipeline – which runs from Texas to New York – said it fell victim to a cyberattack and shut down as a precaution. Problem, because it provides nearly half of the fuel supply (think: gasoline, diesel, and jet fuel) used on the East Coast. The halt could lead gas prices to spike. Now, Commerce Secretary Gina Raimondo says the gov's working to avoid disruptions to fuel supplies.

What no one wants falling from the sky…

Rocket debris. Last month, a Chinese rocket launched a piece of a new space station into orbit. But after the launch, rocket debris got caught in orbit, tumbling uncontrollably for more than a week. There were fears it could crash down somewhere on Earth. Luckily, it splashed down in the Indian Ocean, near the Maldives. NASA wasn't happy and told China off for not meeting "responsible standards" for their space debris. China had said most of the debris would burn up when it re-entered Earth and likely wouldn't hurt anyone.

Medina Spirit. Yesterday, the horse's trainer said the winner of the 2021 Kentucky Derby tested positive for a steroid. The trainer has been suspended and Medina Spirit could become the third horse in 147 years to lose its winning title.

Who's giving everyone a pizza their mind…