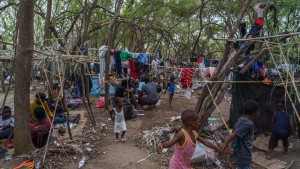 The US-Mexico border is in chaos.

We're talking about the recent surge of Haitian migrants in Del Rio, Texas. Haitians have been migrating to the US for years. After the deadly 2010 earthquake struck the Caribbean island, tens of thousands left Haiti in search of a better life. And many found it for a while in countries like Brazil and Chile. But economic instability and strict immigration policies in South America forced many Haitians to pack up again. The pandemic only exacerbated people’s quest for new opportunities. Especially given the constant setbacks hitting their home country.

It’s been a challenging decade for Haiti. The island nation still hasn’t fully recovered from a number of natural disasters: the 2010 quake, Hurricane Matthew in 2016, and another deadly earthquake and Tropical Storm Grace in August. And foreign aid can only go so far when an entire island nation needs rebuilding. But it's not the only strife Haitians have had to face. For years, corruption was the lay of the land. Concerns of a dictatorship grew, as did socio-economic woes. And just as the country was getting its first coronavirus vaccines this summer, President Jovenel Moïse was assassinated. As all of these crises have come to a head, about 14,000 Haitians have fled to the southern border – a mixture of hope, misinformation, and help via messaging apps like WhatsApp leading the way.

The US hasn’t exactly been welcoming. Haitians have been living with little access to food or water as immigration authorities process their paperwork. And images of Border Patrol agents have led to accusations that they whipped migrants with horse reins – prompting the gov to start an investigation. In the meantime, the Biden admin is flying hundreds of Haitians back to their home country – despite criticism from Democrats. And is releasing others (think: families, pregnant women) into the US. Texas Gov. Greg Abbott (R) has stepped up border patrols. And Mexico’s also getting involved, busing and flying Haitians away toward its border with Guatemala.

Thousands of Haitians have made an arduous and dangerous journey in search of a new life. But as they fight for a chance in the US, they’re also putting a spotlight on America’s immigration policies – and reigniting the debate on how to address the southern border.

Who’s singing ‘this I promise you’...

President Biden. Yesterday, he vowed to donate another 500 million Pfizer COVID-19 vaccine doses to poorer countries. Earlier this year, the president said the US would give out 500 million doses to combat the spread of the virus. Now, he’s doubling that number. And called on world leaders to join in helping vaccinate 70% of the global population by next September. So far, the US has shipped out about 160 million doses, donating more than any other country. But the number still falls short of the 11 billion doses the WHO says are needed to end the pandemic.

What people are looking into…

The long-term effects of sexual assault. A new study shows that women who have been sexually assaulted are more likely to suffer from dementia and stroke later in life. More than 1 in 3 women experience sexual assault at least once in their lifetime. And past studies have shown that the trauma is linked to increased risks of heart disease, depression, and anxiety. Now, researchers are urging doctors to ask their patients if they’ve experienced sexual trauma and to take that into consideration when monitoring their health.

The Fed. Yesterday, it left its benchmark interest rate near zero – but signaled things could hike up in 2022. Interest rates have remained low since the beginning of the pandemic to help the economy as businesses closed down and a record number of Americans lost their jobs. Now, the Fed's saying the economy's on the up and up. And we could find out more after the group's next meeting in November.

PS: Read more about how the Fed's moves affect the economy and your wallet.

Why things are looking sweet for Netflix…

A new documentary is on the radar.