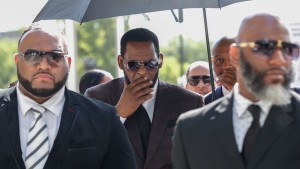 Since the 1990s, women and girls have accused the singer of sexual abuse, manipulation, and inappropriate relationships. But he's evaded the law, despite several women coming forward. And was also acquitted in 2008 of child pornography charges. But over a decade later, a bombshell documentary renewed the spotlight on sexual misconduct allegations against him. Kelly's trial started last month. He faced eight counts of sex trafficking and one count of racketeering – which included acts of kidnapping and bribery. Kelly's always denied the allegations. But yesterday, a jury – made up of seven men and five women – found him guilty on all counts.

During the six-week trial, prosecutors brought forward 45 witnesses – including 11 accusers. In this case, he was charged for crimes directly related to six people he had abused. Their names are: Aaliyah (the famed R&B singer), Stephanie, Sonja, Jerhonda, Jane, and Faith. Some testified about Kelly's illegal marriage to Aaliyah when she was just 15. One woman testified that the R&B singer sexually abused her when she was 17. And recorded them having sex. A former radio intern said Kelly invited her to Chicago for an interview but was kept hostage for several days. She said she was abused by the singer after losing consciousness. Prosecutors called Kelly a "predator" who used his fame to groom and exploit girls. But the defense said the relationships were consensual, labeling accusers as “groupies.”

This is the highest-profile case to come after the first Me Too-era. And one in which most of the victims are Black women. Gloria Allred – a famous women's rights attorney who represented three of the survivors – said “of all the predators that I have pursued, Mr. Kelly is the worst.” But Kelly's attorney said the singer wasn't expecting the outcome. And are mulling an appeal. Kelly's sentencing is scheduled for May 2022. He faces 10 years to life in prison. But his time in court may not be over yet. Kelly faces federal charges in Chicago, along with state charges in Illinois and Minnesota. It’s unclear how his conviction will affect those cases.

There's been nearly 30 years of allegations against Kelly. But now victims are starting to get the justice they deserve. And while movements like #MeToo expose high-profile abusers, it's still taken longer for the voices of Black and Brown women to be heard – and taken seriously. Meaning, there's still a lot more work to do.

Congress. Yesterday, Senate Republicans blocked a bill to fund the gov and raise the debt ceiling. Meaning: lawmakers have until Thursday at midnight to get their sh*t together or the gov will shut down. A move that could leave hundreds of thousands of federal workers without a paycheck. Separately, if the debt ceiling isn't raised, the US could for the first time in its history default on its payments. But Republicans are saying 'that sounds like the Dems' problem.' And are pushing Democrats to figure it out within their own party. Even though both parties contributed to the national debt. Now, Dems could be forced to pass a short-term funding bill. And circle back to the debt limit suspension later. Regardless, the clock’s ticking on both.

PS... Here's what a gov shutdown could mean for your wallet.

The US homicide rate. Yesterday, the FBI revealed the number of murders in the US increased nearly 30% last year. It’s the largest rise on record. And while the reasons for the spike are unclear, it's happening across the country – including in cities like Albuquerque, Milwaukee, and Des Moines. Some experts believe the pandemic’s social and economic effects (think: isolation and high unemployment) and an increase in gun purchases played a role.

Where there’s pain at the pump…

The UK. Over the weekend, thousands of gas stations ran out of fuel amid fears of a nationwide shortage. (Cue: flashbacks to spring in the US). Why? Because of many things. But one of the biggest reasons appears to be Brexit. When the UK decided to kiss the EU goodbye, lorry drivers (aka long-haul truckers) decided to hop out of the UK too. Add COVID-19 and an aging workforce into the mix, and the UK was left with a shortage of an estimated 100,000 drivers. Last week, BP reportedly said it was closing a handful of gas stations due to the labor shortage. Which, in turn, triggered panic and fear in Brit drivers, who rushed to fill their tanks. Now, all of this has driven the UK to try and ease concerns. And it's offering temp visas to foreign truckers.

When someone asks you what day it is...

Tell them today’s National Voter Registration Day. While it might not be a ‘big’ election year, state and local races are taking place across the country. And you can’t vote if you’re not registered. Our guide has you covered with everything you need to check your status. Plus, what to do if you moved states, changed your name...or lost your driver’s license (been there).

Who said 'I'll take another round'...

President Biden. Yesterday, he rolled up his sleeve for his Pfizer booster shot (and for the camera). It came days after the CDC recommended the third dose for people 65+. Big flex.

When you’re tired of political talk...