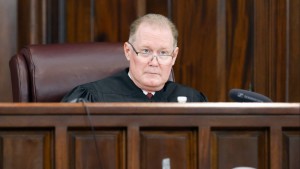 In February 2020, former police officer Gregory McMichael and his son Travis chased and shot Arbery down, killing the 25-year-old Black man while he was on a jog. The gunman allegedly used a racial slur after shooting Arbery. And a third man recorded the shooting. The case sparked outrage after video of the shooting went public. And after reports of failures within the county DA's office. Arbery's family called it a modern lynching. Protesters demanded justice. Now, the three men are on trial in Brunswick, Georgia, for murder and face life in prison. They claim they killed Arbery in self-defense during a citizen’s arrest. But already, there’s concern that the trial isn't a fair one.

Well first, docs the judge had thrown out as evidence were reportedly left on the court's website for all to see (including potential jurors). Then, after nearly three weeks of jury selection, turns out all but one of the 12 jurors are white. (For reference the trial’s happening in a county that’s more than 25% Black.) The defense team had removed eight potential Black jurors. Prosecutors asked the judge to jump in, calling the move "unconstitutional." But the judge said 'yeah there's some intentional discrimination there but just not enough for me to be able to do something about it.' Now, Arbery’s mom says she feels discouraged and has “concerns about getting a guilty verdict.” It’s not the only trial people are watching.

Earlier this week, Kyle Rittenhouse's trial began in Kenosha, Wisconsin. In August 2020, he shot and killed Anthony Huber and Joseph Rosenbaum and injured a third person during protests following the police shooting of Jacob Blake – a 29-year-old Black man. Just two days in, the trial’s already garnering some concern and facing accusations of racial bias. A juror's been dismissed for joking about Blake – who is now paralyzed. And the judge has banned prosecutors from calling Rosenbaum and Huber “victims.” But said “rioters” and “looters” is just fine if the defense can prove that’s the case.

The shootings at the center of these trials came amid America’s racial reckoning. Now, over a year later, racial tensions and the legal system are on public display in what many see as tests for justice.

The Steele dossier. Yesterday, federal authorities arrested Igor Danchenko, a Russian analyst who provided opposition research on former President Trump. That research was made up of largely unverified allegations that then-candidate Trump was conspiring with Russia to beat then-candidate Hillary Clinton. Danchenko was the one feeding into the dossier which was later used in reports by former British spy Christopher Steele – hence the name. (Still with us? Great.) But a 2019 DOJ report found that Danchenko’s intel was more speculative. Now, authorities have arrested him on charges that he lied to the FBI about how he got his intel. He appeared in fed court and is out on bond.

Ethiopia. The conflict there is threatening to erupt in full-scale war. This week marked one year since Ethiopian Prime Minister Abiy Ahmed launched military operations against the Tigray People's Liberation Front (TPLF) – a regional ruling party in the country’s northern Tigray region. He said it was because the TPLF attacked a military base and tried to steal weapons and artillery. Since then, thousands of people have died and over 1 million others have been displaced. The UN has accused both sides of potential war crimes and crimes against humanity. Now, the Ethiopian gov has declared a state of emergency. Abiy has urged citizens to "bury" TPLF members approaching the capital – a statement Facebook has since removed. Meanwhile, there are reports that the government is rounding up ethnic Tigrayans in the capital and arresting them in house-to-house searches. The US and UN are calling for an immediate ceasefire.

The UK. Yesterday, it became the first country to approve use of a COVID-19 antiviral pill. Last month, NJ-based pharma giant Merck said molnupiravir (say that five times fast) cut hospitalizations and deaths by about half. It’s considered a game changer since other COVID-19 treatments require an IV or injection. Now, the UK wants to give citizens the option to treat the virus at home. And has already agreed to purchase 480,000 doses of the drug. The British health sec said it was a “historic day.” And recs its use as soon as possible.

...Oh and speaking of COVID-19, the Biden admin has announced a Jan 4 deadline for companies with 100+ workers to have all employees vaccinated or get tested weekly. It affects an estimated 84 million people. We Skimm’d more on vaccinations in the workplace here.

Where women are making history…

Vatican City. Yesterday, Pope Francis selected Sister Raffaella Petrini to take on the city’s No. 2 position of government. Now, the 52-year-old Italian nun is apparently the first woman in that role, and the highest-ranking woman in the Vatican. Hol-yay.

What’s going to give you the Sunday scaries...

PS: Darker days can affect seasonal affective disorder. We Skimm’d what that is and some at-home remedies.