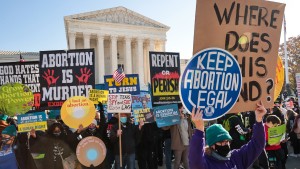 Abortion rights in the US are hanging in the balance.

Yesterday, the Supreme Court heard oral arguments in the most significant abortion case in nearly 50 years. In 2018, Mississippi’s ​​Republican-led state legislature passed a law banning most abortions after 15 weeks. But the state’s only abortion clinic – Jackson Women’s Health Organization – sued. And lower courts have blocked the ban, saying it's unconstitutional. The MS measure directly challenges two cases: the 1973 Roe v Wade landmark decision and the 1992 Planned Parenthood v Casey ruling. They established and affirmed a woman’s right to an abortion, respectively. Now, the case has reached SCOTUS. And the Supremes are weighing in.

After nearly two hours of arguments, the high court’s six conservative justices indicated that they could uphold Mississippi’s ban. And could entirely overturn Roe v Wade. If the latter happens, it could be a big reversal of Supreme Court precedent. Justice Sonia Sotomayor asked whether such a "stench" would undermine the court's previous rulings. Justice Brett Kavanaugh questioned if the high court should be in the middle of the abortion debate or if individual states should decide. And Chief Justice John Roberts seemed interested in upholding the MS law without overturning Roe v Wade, which allows abortions to take place up until around the 24th week of pregnancy.

So, what’s going to happen?

A decision from the high court isn’t expected until June. An attorney for the MS clinic said the ban could cause “profound damage to women’s liberty, equality and the rule of law.” And if the court overturns Roe, at least 12 states have “trigger laws” in place — measures that would immediately outlaw abortion if given the thumbs up. While some states could hit ‘undo,’ at least 15 reportedly have measures protecting abortion rights. Regardless, the average distance to an abortion provider could go from 25 miles to about 125 miles.

In a matter of months, women across the US could have less control over their health care than their mothers and grandmothers. It's a prospect more than half the country doesn't support. The remainder may see it as progress.

Psst...We Skimm'd more about how legal battles have shaped a woman's access to abortions. Tap here.

What’s got everyone refreshing their newsfeed…

Omicron. Yesterday, experts confirmed what we'd all pretty much expected: Omicron is in the US. The first case was detected in San Francisco, CA. The patient – who's fully vaccinated – had just returned from South Africa. And is currently quarantining with mild symptoms. Experts had said it was only a matter of time before Omicron was in the US. But for now, officials say they aren’t aware of any others. Meanwhile, researchers are still working to get more info about the new strain – like how severe the symptoms can get, or the efficacy of vaccines. It may take weeks before we have answers.

PS: See how Omicron (and any other variants) could impact your financial health.

Michigan. Yesterday, officials charged a 15-year-old boy as an adult after he opened fire at a high school north of Detroit. At least four students died and seven others were injured. Authorities said that the boy’s father purchased the handgun just four days before it was used in the shooting. And are reviewing a “mountain of digital evidence” – including video in which the suspect talked about killing students. It’s got the county prosecutor saying the attack was “absolutely premeditated.” Now, the teen’s facing several charges – including four counts of first-degree murder that could lead to a life sentence. His parents could also be facing charges.

Stacey Abrams. Yesterday, the prominent Democrat announced she's entering the Georgia governor's race. In 2018, Abrams ran against now-Gov. Brian Kemp (R). But she refused to concede amid allegations of voter suppression, instead acknowledging that Kemp would "be certified" as the winner. It came after Kemp had dismissed Dems' calls to recuse himself from overseeing the election. Meanwhile, others say there's no evidence the election was stolen. Since then, Dems like President Biden, Sen. Raphael Warnock and Sen. Jon Ossoff were able to win Georgia – and many attributed their victories to Abrams’ work as a voting rights activist in the state. Now, Abrams could face Kemp again in what may be one of 2022's most closely-watched races.

PS: We spoke to Stacey Abrams for our career podcast, "9 to 5ish." She talked about everything from her voting rights work to her experience as a romance novelist. Listen up.

Who's not playing ball...

MLB. Yesterday, team owners voted to lockout players after they couldn’t reach a collective bargaining agreement. The last time this happened was in 1994. A lot of it comes down to money. The players’ union isn’t happy with how teams offer top players top dollar, while leaving others behind. The MLB said it hopes the lockout will “jumpstart” negotiations. While the union disagrees, calling it a “dramatic measure.” Now, it’s unclear if the two sides will be able to reach an agreement by the time spring training starts in mid-February.

When you can’t afford the most expensive cities…