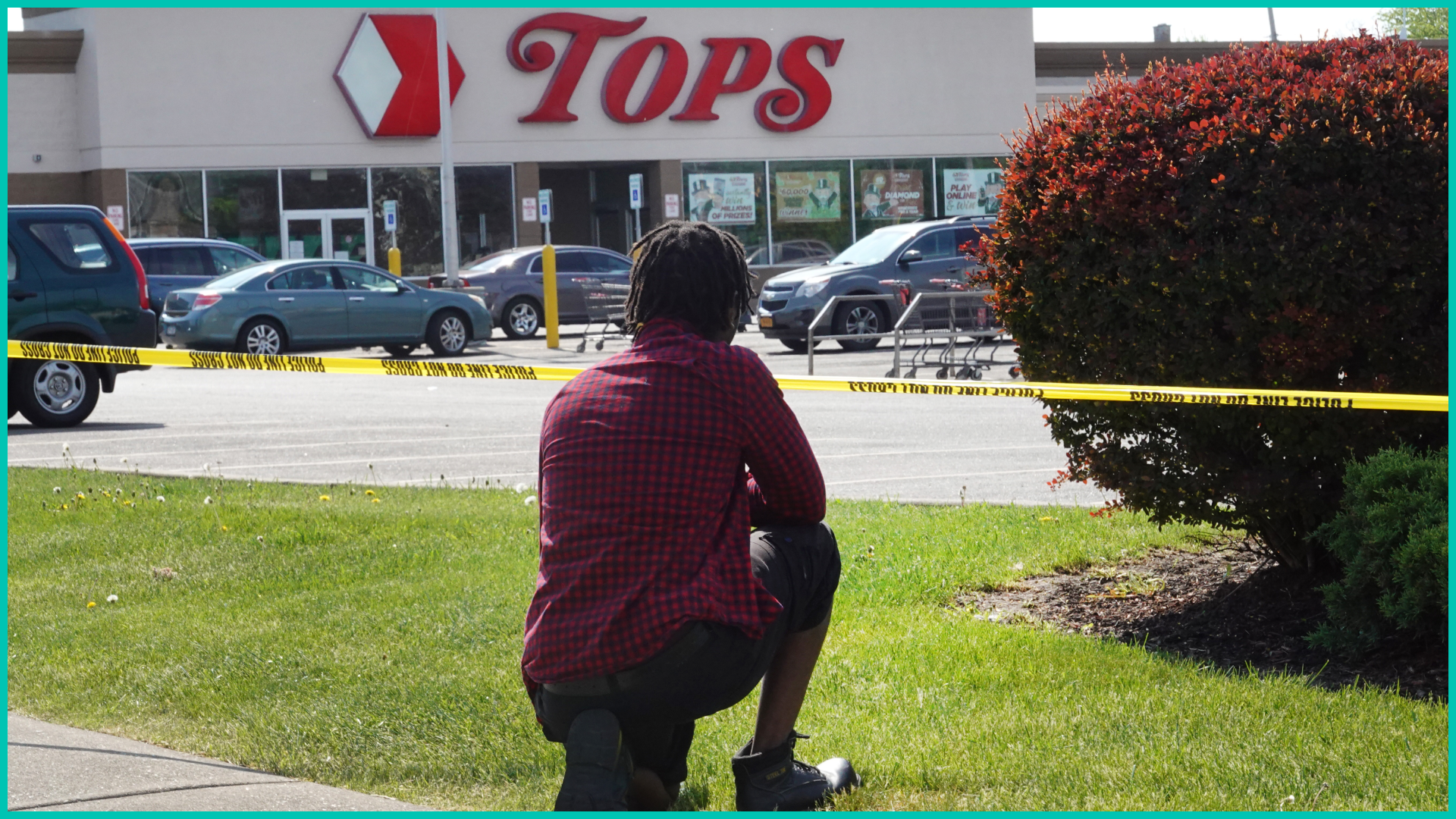 On Saturday, a white 18-year-old drove about 200 miles from his hometown to a supermarket in Buffalo, NY. Armed with an AR-15 and wearing body armor, the suspect live-streamed as he entered Tops Friendly Markets store. He then opened fire, killing 10 people and injuring three others. He’s been charged with first-degree murder and faces life in prison without parole.

Why did this happen?

Racism. The attack took place in a predominantly Black neighborhood. Out of the 13 people shot, 11 were Black. Officials have confirmed the attack was “racially motivated.” They have pointed to a 180-page manifesto they believe the suspect wrote. It references a theory used by white supremacists and dozens of racist and antisemitic memes.

How are people responding?

President Biden urged Americans to unite against the hate he called “a stain on the soul of America.” Rep. Adam Kinzinger (R-IL) called out fellow Republicans, accusing them of nodding toward white nationalism. Some have called out Fox News host Tucker Carlson specifically for pushing one of the theories cited in the manifesto. Others are renewing their calls on the Biden admin to restart stalled gun control efforts.

We’re less than six months into 2022, and the US has already seen at least 198 mass shootings. This one, reminding many of the deadly Charleston church shooting, is believed to be one of the deadliest racist massacres in recent US history.

Editor's note: Changes have been made to this story to clarify that it's unclear whether the gunman acquired the three guns before or after his mental health evaluation.

theSkimm is tracking state actions in the lead-up to a landmark Supreme Court decision expected by July. Here’s the latest…

Protests: On Saturday, tens of thousands of demonstrators in cities like LA, NYC, and DC took to the streets to show their support for abortion rights. The rallies — organized by Planned Parenthood and other orgs — were in response to a leaked draft decision from the Supreme Court to overturn Roe v. Wade, expected to be announced by July. Meanwhile, some of the world’s most famous musicians signed onto an ad condemning the expected SCOTUS decision.

Who’s saying 'do you want to form an alliance with me?'…

Sweden and Finland. Yesterday, the two Nordic countries announced they want to make things official with NATO. It comes after Russia’s war in Ukraine left them wanting the kind of protection NATO could provide. It would be a historic move considering Sweden and Finland’s traditionally neutral pasts. But Turkey (a NATO member) said ‘we’re not here to block you, but…’ It accused both countries of supporting a terrorist org, aka the Kurdistan Workers’ Party — which has called for an independent Kurdish state within Turkey. NATO’s Secretary-General said he’s “confident” they’ll find common ground. The whole process could take six months to a year.

Where transgender kids are in the spotlight…

Texas. On Friday, the state's high court said the state can investigate parents for child abuse if they provide gender-affirming care to their trans kids. Gov. Greg Abbott (R) signed the rule into law in February but it came with pushback and a lawsuit. Now, a court is saying Abbott overreached and didn't have the authority to order the investigations. Meaning, that while the court gave these investigations the green light, it also puts others (like this one) on hold. Both sides are claiming victory in the ruling.

Alabama. On Friday, a federal judge blocked part of a law that made it a felony to prescribe puberty blockers and hormones to transgender minors in Alabama. The ban went into effect last week, making that type of care a felony offense punishable by up to 10 years in prison. Now, a judge is saying the state did not have credible evidence to support its claims that the medications are 'experimental' and blocked it for now. Still, other parts of the law, including banning doctors from performing gender-affirming surgeries on children, remain in place.

PS: Check out our interview with The Trevor Project CEO Amit Paley about the rise in anti-LGBTQ+ legislation and its impact on the community.

Brittney Griner. On Friday, Russia extended the WNBA star’s pre-trial detention by a month. In February, Griner was detained at an airport in Moscow for allegedly carrying illegal vape cartridges. Her detention was supposed to be over this week. Now, her lawyers say the short extension may signal her trial isn’t far off. She faces up to 10 years in prison in Russia.

What’s even better than “The Story of Fire Saga”...

While some looked up at the moon this weekend...

Scientists learned to plant on it.