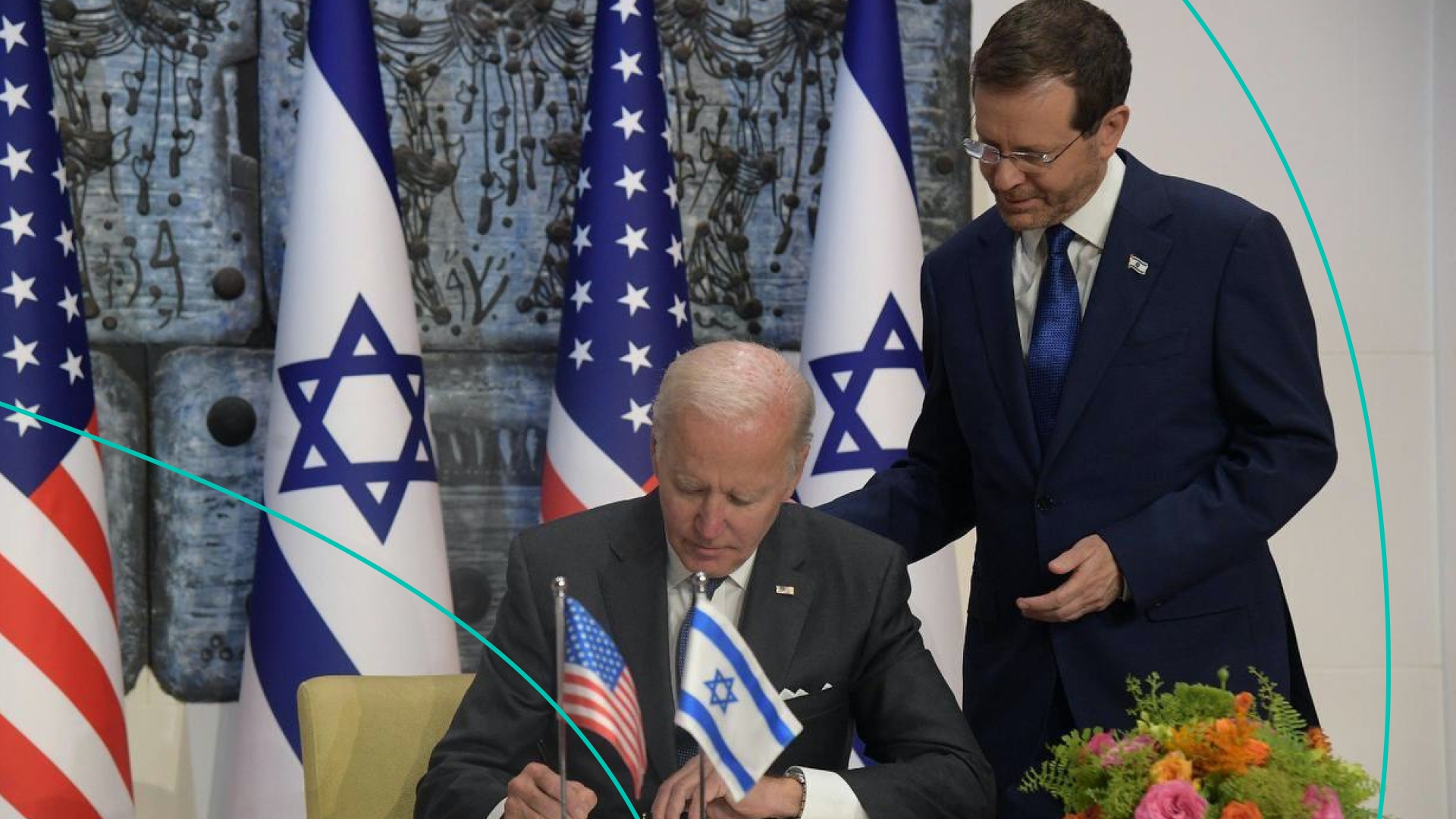 Why Don’t You Just Meet Me in the Middle East?

Tell me the itinerary.

Biden made his way to the Middle East earlier this week — his first trip to the region since taking office. The trip started in Israel where he met with Israeli leadership. Today, he heads over to Saudi Arabia — the first US president to fly directly from Israel to the kingdom. Here’s what you need to know…

Israel and the Palestinian territories…Biden signed a joint pledge with Israeli PM Yair Lapid to limit Iran’s nuclear capabilities...but the two sides have different strategies in mind. Lapid says “the free world will use force” if Iran continues its program. But Biden still thinks he can make a nuclear deal happen. Meanwhile, Israel reportedly agreed to move forces away from two strategic Red Sea islands. The move could open the door to normalizing relations with the kingdom — historic...if it happens. Steps are being made as Saudi Arabia announced it will open its airspace to commercial Israeli planes. Today, Biden is set to meet with Palestinian Authority President Mahmoud Abbas after restoring $500 million in aid. But he refused to meet with the family of killed Palestinian-American journalist Shireen Abu Akleh.

Saudi Arabia…The US and the kingdom have long been allies. But after the murder of journalist Jamal Khashoggi, Biden promised to treat Saudi Arabia as a “pariah” state. Fast forward to high oil prices and Biden is calling the kingdom a “strategic partner.” Biden says he wants to “reorient — but not rupture” relations. And is expected to ask for an assist on gas prices. The two sides will also talk about shared security concerns like Iran. And reportedly announce joint economic projects that could challenge competition from China. One thing to watch: handshakes. Biden’s team may want to avoid the photo op of him shaking hands with Crown Prince Mohammed bin Salman...but he can’t easily use the COVID excuse after handshakes in Israel.

Biden is walking a tightrope in the Middle East. But he’s hoping to return home with foreign policy wins he can sell to an American audience that hasn’t been impressed recently.

Uber. Earlier this week, at least 550 women are suing the ride-sharing company over sexual assault claims. Last month, the company released a report amid ongoing safety concerns. Between 2019 and 2020, Uber saw 3,824 reports of sexual assault...down from 5,981 in the two years prior. It also comes after a leak exposed the company’s shady practices on everything from political lobbying to driving out competition. Now, the women are coming forward saying Uber drivers “kidnapped, sexually assaulted, sexually battered, raped, falsely imprisoned, stalked, harassed, or otherwise attacked” while riding as passengers. The lawsuit claims Uber knew of these allegations as early as 2014 but hasn’t made any changes. Uber says it can’t comment on the litigation.

Italy’s PM. Yesterday, PM Mario Draghi tried to submit his two weeks notice after a confidence vote didn’t go according to plan. Earlier in the day, members of his government boycotted a bill that would help with inflation and energy prices. Draghi is taking this as a personal snub considering the group’s leader, Giuseppe Conte, is Draghi’s predecessor. Now, Draghi says national unity “doesn’t exist.” But Italian President Sergio Mattarella is saying ‘slow down buckaroo’ and that Draghi can still put in the work to unite the gov. But with the second-biggest party in parliament pulling its support, it's unclear how the coalition will stay together.

...Oh and speaking of governments on the outs, yesterday Sri Lanka’s president officially handed in his resignation. Lawmakers will work to elect his replacement in the coming days.

Ivana Trump. Yesterday, President Trump’s first ex-wife died in her NYC apartment. She was 73. The Czech American businesswoman married Trump in 1977 and played a key role in helping him build his real estate empire, including Trump Tower. Together, they were known as one of NYC’s biggest power couples. Ivana and Donald had three children — Donald Jr, Ivanka, and Eric Trump — before divorcing in 1992. Ivana's family remembered her as a “caring mother and friend.” And paid tribute to her life as a “survivor” of communist rule in former Czechoslovakia.

While “Top Gun: Maverick” is soaring to the top of the box office...

“Where the Crawdads Sing” is top of many minds.

Who’s opening up about her mental health...