5 Planets Are Aligning For The First Time In 18 Years. Here's How To Catch A Glimpse. 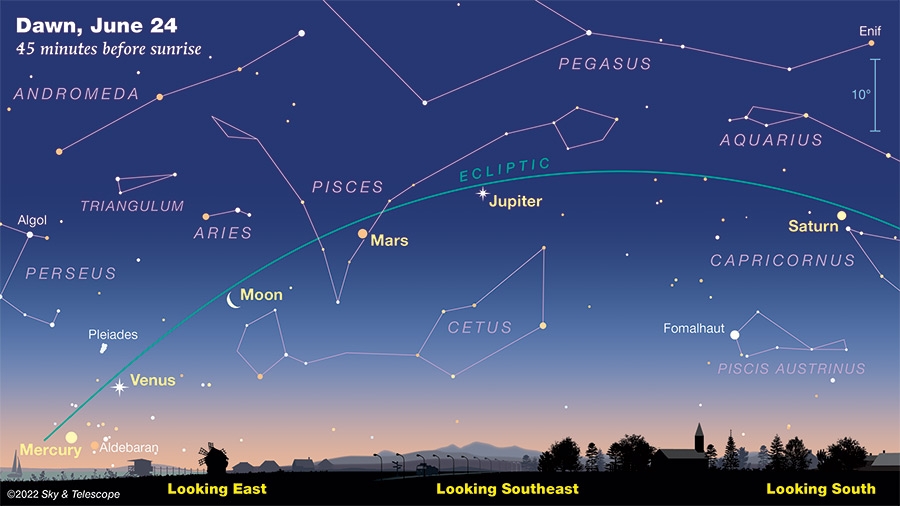 It’s not out of the ordinary to see a planet or two among the stars. But starting in the wee hours of June 24, you could see five planets: Mercury, Venus, Mars, Jupiter, and Saturn. It’s the first time in 18 years that the planets will be aligned in their natural order from the sun. And it might be worth setting your alarm extra early. Because this won’t happen again ‘til 2040.

What should I do to get the best view?

The best time to see the planets lined up will be about 45-60 minutes before sunrise. And look in the east-southeast direction. You'll be able to see it with your naked eye — no telescope or binoculars needed. As long as the skies are clear. (But you can bring a pair if you want a closer look.) The planets should be shining brighter than the stars, making them easy to spot. And it should be visible to those living in cities too.

Anything else I should look out for?

Mercury might be the hardest to spot because it’s so close to the sun. And as a bonus, a crescent moon will be in between Venus and Mars — acting as a stand-in for Earth. The rare “parade of planets” will be visible through the month of June. But over the next few months, the planets will begin to social distance again. And Venus and Saturn won’t be visible at all by September.

Oh, and if you’re worried about tidal waves or mood issues, don’t be. This isn’t Mercury retrograde. So us Earthlings shouldn’t be affected.

Humans have observed the stars for centuries, and we’re still in awe of celestial events. And while this isn’t necessarily a super-rare cosmic event, it’s worth catching a glimpse of.