A Crisis at the Border: Why Haitian Migrants are Making the Trek to the US 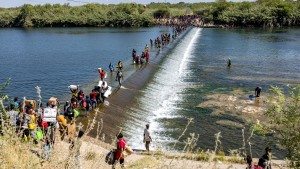 In September, a humanitarian crisis developed at the US southern border: More than 14,000 immigrants from Haiti crossed the Rio Grande — fleeing poverty, natural disasters, violence, and more to try and claim asylum in the US.

By mid-month, a makeshift camp was set up under a border bridge in Del Rio, Texas. There, migrants endured hot temps and had little access to food and water. Images of Border Patrol agents led to accusations that they whipped migrants with horse reins, prompting the gov to start an investigation. Meanwhile, in an effort to control the situation, the admin deported hundreds of migrants back to Haiti, but allowed some into the US.

Migrants travel for days or weeks through dangerous conditions (think: hot weather, robberies and other crimes) to make it to the US-Mexico border. So let’s talk about it. Here’s what drove Haitian migrants to make the trek, how the situation got to this point, and where things could go from here.

Since gaining independence from France in 1804, Haiti has had a long and painful history. But there are two long-standing issues that the island nation faces.

Haiti is no stranger to natural disasters (think: hurricanes and earthquakes). Hispaniola, the island that Haiti shares with the Dominican Republic, sits on multiple fault lines between two major tectonic plates. (Remember: When tectonic plates shift, they can cause earthquakes.) And when it comes to hurricanes, Haiti is part of the Caribbean, which is prone to powerful storms.

In the past decade, Haiti has been hit with several natural disasters. Like in…

Haiti has faced political turmoil for nearly a century, from US intervention in the early 1900s to the Duvalier regime that brought years of corruption and violence. The instability has continued into the 2010s and beyond.

Enter: Jovenel Moïse. He was elected in 2016 and took office in 2017, but his term in office was full of controversy. See: trying to change the constitution to give himself more power, and refusing to step down from office when opponents said his term should have ended. Moïse faced accusations of corruption, ruining the economy, and of governing the country like a dictator. And his decision not to step down led to widespread protests and violence.

In July 2021, gunmen shot and killed him, marking the first assasination in Haiti in more than a century. The last one, in 1915, triggered a 19-year-long occupation by the US government. This time, the US promised to stay out. But his death has taken a major toll on a country that's already struggling. An election to replace Moïse was postponed until November.

What's Happening at the US-Mexico Border

These crises coming to a head. And the influx of migrants has created chaos in Del Rio, TX. After making the long trip to the US, thousands of migrants have waited in slumlike conditions for Border Patrol to process their asylum claims, and the camp grew exponentially within a matter of days. Worsening sanitation issues and big crowds prompted Texas Gov. Greg Abbott (R) to send the federal gov an SOS. As of Sept 24, the Department of Homeland Security completely cleared out the camp.

But before it was emptied out, the Biden admin quickly deported 2,000 Haitian migrants back to the island nation. And he did that through something called Title 42 – an order first enacted under the Trump admin. The goal: To stop the spread of COVID-19 by essentially turning away asylum seekers at the border. The order reportedly allowed Biden to deport more Haitians in a few weeks than Trump had in an entire year. Haitians have also been bussed to different US cities so other Border Patrols can help with processing.

At the same time, the Department of Homeland Security has also released migrants into the US, giving them notices to appear in court in two months. There isn’t a clear criteria for who gets to stay, but it seems that it’s mainly pregnant women and families. The admin's long-standing policy is that it won't send back unaccompanied migrant children.

Another factor that has encouraged them to attempt to seek asylum in the US is the perception that Biden's admin is more accommodating to undocumented immigrants, compared to former President Trump's. Under the current admin...

Plus, many Haitian migrants heard rumors that Biden has allowed some migrants traveling with their children into the country.

What’s Next for the Haitian Migrants, Haiti, and the US

This crisis could have long-lasting impacts on the people and the countries involved. Let’s take a look at what could be next for…

Many Haitians were upset when they arrived back at the island capital's airport. Some of them weren’t even told the planes they were on were taking them back to Haiti. They're also frustrated that their own government allowed the deportation flights. Feeling as though they can’t stay in a country so deep in turmoil, some are hoping to restart the long process of migration back to South and Central America. Meanwhile, there are still thousands of migrants who are voluntarily returning to Mexico instead of taking their chances with the US Border Patrol. Others are staying put in the US until they can make their court appearance. But the future for most of them remains unclear.

Psst...Here are some ways you can help Haitian migrants.

It doesn’t look like Haiti is in any shape to be accepting more citizens. As migrants return, officials there are worried that they won't have enough basics like housing or food for them. Jean Negot Bonheur Delva, head of Haiti’s migration office, asked the US to grant a “humanitarian moratorium” – putting pressure on Biden to stop deporting Haitians until the island can get back on its feet. And it opens up questions about where Haiti's relationship with the US will stand in the future. Which brings us to...

The ongoing crisis has reignited the debate around how to handle the southern border. The Biden admin has faced pushback for expelling the migrants. Critics say this goes against the welcoming immigration stance Biden took on the presidential campaign trail. The US special envoy to Haiti resigned over the crisis, calling out Biden’s mismanagement of the situation and the inhumane treatment of the migrants. Senate Majority Leader Chuck Schumer (D-NY) says that it “defies common sense” to deport migrants back to a country that can’t take them.

Meanwhile, Republicans don’t think Biden is doing enough to prevent migrants from crossing the border in the first place. They’re accusing Biden of instilling an “open border policy” even though he’s continuing with certain Trump policies (like Title 42). It also seems like Biden’s stance on immigration may be getting even tougher than what we’ve seen so far: He’s currently in talks with Mexico to restart the Trump-era Remain-in-Mexico program.

Haiti is the poorest country in the Western Hemisphere with a long history of instability. And the events there have now taken hold on the US and its own immigration policies. Eyes are now on the Biden admin to see if and how it’ll help the thousands of people desperate for help and a better life.