Beyoncé's New Banger, A Mid-Air Proposal, And 11 Other Good News Stories From June 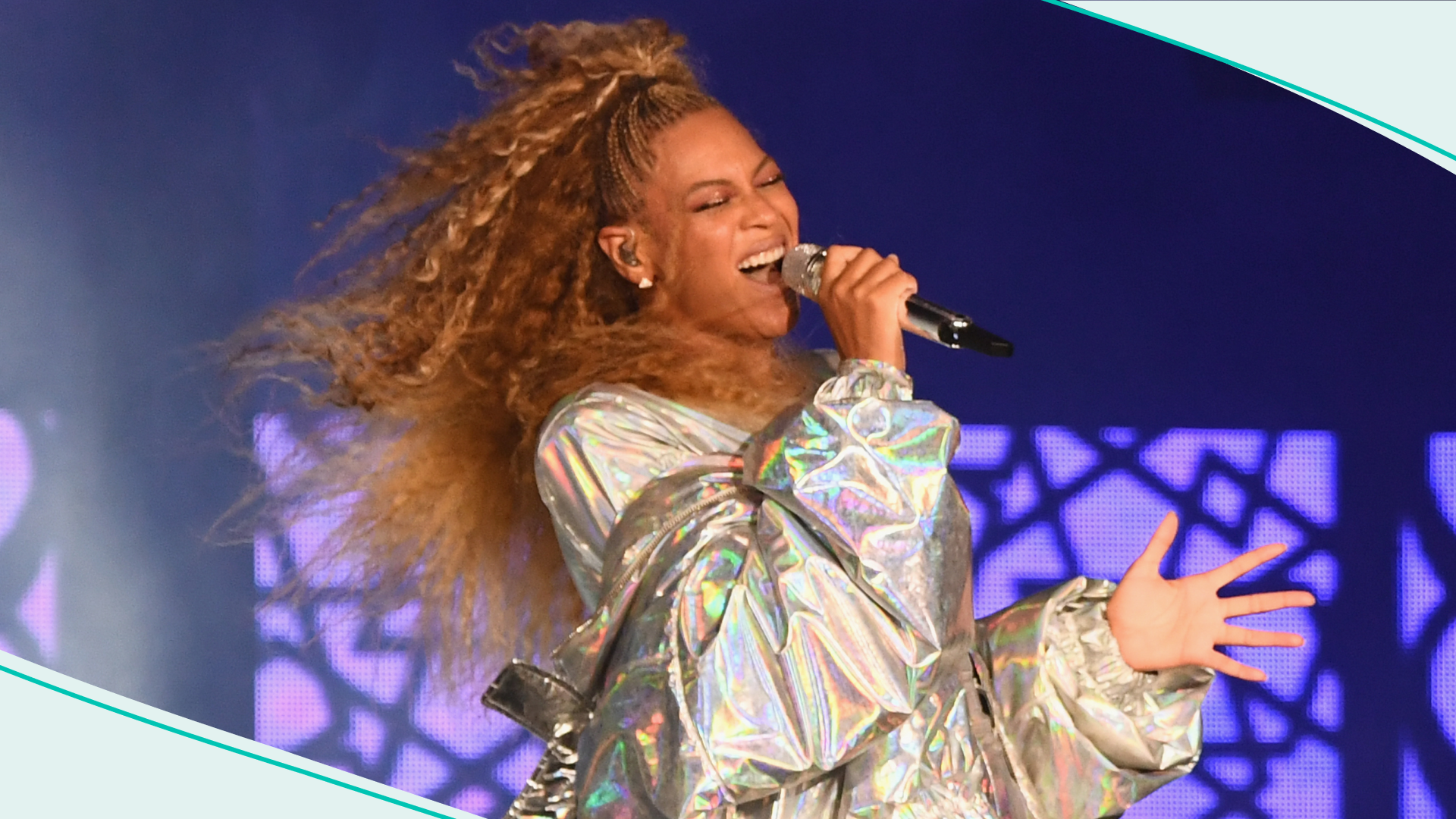 We're officially halfway through 2022. And some of us may already be over this year, saying 'hello 2023,' given how tough the news cycle has been. See: record-high inflation. The stock market hitting bear market territory. A bumpy start to the summer travel season. The ongoing baby formula shortage. And the Supreme Court's decision to overturn Roe v. Wade...just to name a few things.

It probably goes without saying, but we could all use some good news. After all, hot girl summer (or, for some of us, feral girl summer) is upon us. So let’s celebrate some bright spots in June. In the spirit of Pride Month, movies like “Fire Island” and “Lightyear'' helped boost LGBTQ+ representation on the big screen. Plus, ‘Ms. Marvel’ introduced the world to the first Muslim superhero. If you think those sound good, keep scrolling for more.

A month full of Pride

J.Lo got loud in support of her child

During a performance in Los Angeles, Jennifer Lopez used they/them pronouns to introduce her child Emme for a duet. In a now-viral TikTok, Lopez said, “The last time we performed together was in a big stadium like this," referring to the Super Bowl 2020 halftime show. “They are very, very busy. Booked. And pricey. They cost me when they come out. But they're worth every single penny because they're my favorite duet partner of all time." Lopez’s statement has garnered tons of praise from fans.

Love was definitely in the air for this couple — mid-air that is. Alaska Airlines flight attendant Veronica Rojas popped the question to her girlfriend and coworker Alejandra Moncayo over the plane's PA system. Best of all, Moncayo was also planning to propose to Rojas the same day. And popped the question back when they arrived at the gate. Grab your tissues.

Our favorite space ranger is back. ‘Lightyear’ — which hit theaters on June 17 — is a prequel to everyone’s fave ‘90s animated movie “Toy Story.” And tells the origin story of the man behind Andy’s Buzz Lightyear action figure. What's even better? The movie showcases a relationship between two women (Buzz's friend Alicia and her wife) — and includes the first kiss between two same-sex characters in a Pixar film. While it caused some controversy in certain countries, many would agree it’s lightyears overdue.

A queer youth conference in rural Texas? Sign us up.

After winning a $10,000 grant from the It Gets Better Project, Marz Gamez brought a queer youth conference to his rural hometown of Mission, Texas. Specifically because of how small the community is. Not to mention, in a traditionally red state known for pursuing anti-LGBTQ+ legislation. It’s a place where “you know most people, coming into this whole entire school,” Gamez said. “It's really difficult to just present ourselves to our parents, because they have this cultural division. The [conference] will provide a safe space and support for everybody."

Queen Bey is back in Formation

Beyoncé’s new track, “Break My Soul,” does just that (in the best way). The song gives off an ‘80s house music vibe. And samples Big Freedia’s “Explode” and Robin S.’s hit, "Show Me Love." It’s the first taste of Beyoncé’s “Renaissance” album coming out July 29 — which will be her first solo studio album since 2016’s “Lemonade.” Yes, the Beyhive is buzzing.

Cha-ching. President Biden appointed the first Native American US treasurer: Marilynn Malerba. She's the lifetime chief of the Mohegan Tribe. And in her new gig, she’ll oversee the US Mint, Bureau of Engraving and Printing, Fort Knox, and work closely with the Federal Reserve. (Plus, her signature will be on the US dollar.) Unlike many gov roles, the treasury position isn’t part of the boy’s club. All US treasurers for the last 60 years have been women. And Malerba is continuing that legacy and breaking barriers at the same time.

Katya Echazarreta just went on a journey that was literally out of this world. She was on board for Blue Origin's fifth trip to the edge of space. Making her the first-ever Mexican-born woman to do that. An engineer and science communicator from Guadalajara, Mexico, she was selected by the nonprofit called Space for Humanity. The org is sending select people to space so they can experience the “overview effect” (aka a profound shift in perspective astronauts have experienced by seeing the Earth from space).

If being the most decorated US track and field athlete in history wasn’t enough, Allyson Felix is also breaking barriers for mothers. She partnered with Athleta plus &Mother to launch a program that offers free child care to athletes, coaches, and staff at the US Track and Field championships. They’ve opened a third round of child care grants. And given female athletes $10,000 for child care expenses so they can train and compete. So far, Felix and her partners have given out more than $200,000 in grants. Talk about going for the gold.

A jubilee fit for a queen

The UK threw a well-deserved party for Queen Elizabeth II: the Platinum Jubilee. Which marked her 70th year on the throne. She’s the first British monarch to go platinum. But it wasn’t her first rodeo — it was her sixth jubilee celebration. Even though she scaled back on her appearances during the celebrations, she stopped by the Buckingham Palace balcony for a royal wave.

The US celebrated 50 years of Title IX

June 23 marked the 50th anniversary of Congress passing Title IX. Aka the law that banned sex-based discrimination in schools and activity programs. And opened the door for women in sports. The landmark law is now responsible for protecting students from a broad range of discrimination — like sexual harassment and mistreatment (including those in the LGBTQ+ community). And while there’s still a long way to go, it doesn’t mean we can’t celebrate the major victories along the way.

More wins around the globe

This bloodhound has every right to toot his own horn. Trumpet became the first bloodhound to win the Westminster Kennel Club Dog Show. Beating out a French bulldog, a German shepherd, a Maltese, an English setter, a Samoyed, and a Lakeland terrier for the top prize. What a doggone good boy.

The kiddos are, finally, alright. More than a year and a half after COVID-19 vaccines first hit US markets, small children are finally eligible for vaccination. The CDC followed in the FDA’s footsteps and recommended that all children ages six months through five years get a Pfizer or Moderna vaccine. Many parents have been waiting a long time for the announcement. But if you're concerned about getting a vaccine for your kid, we talked to experts about it here.

A Nobel Peace Prize winner does a noble deed

Russian journalist Dmitry Muratov auctioned off his Nobel Peace Prize medal. He won it last year for his “efforts to safeguard freedom of expression.” And he donated the $103.5 million from the auction to help Ukrainian child refugees. As the editor-in-chief of the Russian Novaya Gazeta newspaper, he won the award in 2021 for his “efforts to safeguard freedom of expression.” After the bidding closed, he said, “I was hoping that there was going to be an enormous amount of solidarity, but I was not expecting this to be such a huge amount.”

Summer is here. And despite a heavy news cycle, a little bit of good news can help brighten your day. So open a window, text the group chat, and share some happy headlines.