COP26: What Is It? And What Is It Going to Change? 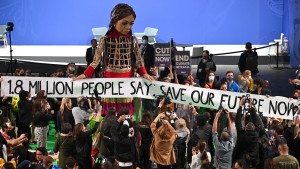 This fall, Glasgow, Scotland was flooded with world, business, and activist leaders. And they got together to talk about a hot topic (no pun intended): Climate change. This meetup — called COP26 — was hailed as a “last chance” to save the planet. But, like your ex, the nations involved in the conference have a history of making promises they can’t keep.

COP26 is the 2021 UN climate change conference, which usually happens annually. (Except for last year, when — like many events in 2020 — it was delayed because of the pandemic.) COP stands for Conference of the Parties. And includes countries like the EU and the US to Afghanistan and Liberia that signed a climate change treaty back in the ‘90s. The 26 stands for the 26th summit ever held. Yes, that means 26 of these meetings have happened...and climate change is still a mess.

The location typically changes, and Glasgow played host this year. Some of the goals for the meeting were to: implement plans to reach net-zero emissions by 2050, protect communities and natural habitats, and push developed nations to mobilize billions of dollars a year to fight climate change.

At the end of each conference, the nations in attendance typically sign a key agreement. In the past, they’ve agreed to do things like protect forests and allocate money toward combating the crisis. Experts say COP21 resulted in the most historic agreement – since it established the Paris climate deal. Reminder: In that agreement, almost every country in the world pledged to cut their greenhouse gas emissions to limit global warming to 1.5 degrees Celsius. But it hasn’t worked out as planned. In 2017, then-President Trump said the US was pulling out of the deal. And this year, President Biden said ‘America is back.’

Meanwhile, Mother Earth has continued to overheat like she’s living in a hot yoga studio. Extreme weather events are becoming more frequent and severe. Sea levels are rising around the world. And we’re dealing with record hot temperatures more often, to name a few issues. And people across the globe are feeling the effects of climate change in their health and wallets. And similar to the US’s in-and-out of the Paris climate deal, other countries are also falling short on their promises.

Earlier this year, one analysis found that the world’s leading economies don’t have plans in place to meet their goals under the 2015 agreement. And that has especially put poorer countries in a bind. Think: Undeveloped countries pollute less but are more likely to feel the impacts of climate change. They also may lack the resources for relief.

In 2019, COP25 went down in Madrid. And it resulted in the longest climate talks in COP history, with negotiations lasting two days after the summit was scheduled to end. And some issues were left unresolved, like carbon markets, which were punted to the next meeting in Glasgow.

COP26: What Went Down At This Year’s Conference

More than 100 world leaders and politicians representing nearly 200 countries showed up at COP26. Including President Biden, US climate envoy John Kerry, and former President Obama. Others like UK PM Boris Johnson, Canadian PM Justin Trudeau, French President Emmanuel Macron, German Chancellor Angela Merkel, and India’s PM Narendra Modi also made an appearance. Leonardo di Caprio brought the star power. And hundreds of fossil fuel lobbyists showed up too – outnumbering reps for any single country. But who didn’t make it? Russia and China. Red flag, considering they’re among the top five highest emitters of greenhouse gasses. (China, in particular, is No. 1 — followed by the US.) At the end of COP26, delegates unanimously agreed to the Glasgow Climate Pact.

Here’s what it includes:

Here's what it doesn’t include:

The new agreement represents a huge step forward for international climate change conversations. But some delegates weren’t in a cheery mood after the summit ended. One called it a text made in the “spirit of compromise,” adding that the deal didn’t go far enough. And new analysis shows that the world is still on track for dangerous global warming — despite the short-term pledges from COP26.

Meanwhile, Indigenous delegates argued that the conference was not inclusive, making it difficult for their voices to be heard. Some say colonialism took a front seat — and that rich, predominantly white countries were leading the charge. Another issue was accessibility. It was difficult for some Indigenous people to physically get to the conference — some of them reportedly participated virtually, but may not have been able to be involved beyond listening to the conversation.

Also not impressed by COP26: Greta Thunberg, (aka the teen environmental activist who has repeatedly called out world leaders for dragging their feet on saving the planet). She also called out COP26 as a “failure.” She led a youth activist march that included thousands of protesters who demanded world leaders take more substantial action. Because, as Thunberg said, “It should be obvious that we cannot solve a crisis with the same methods that got us into it in the first place.”

COP26 was seen as a last chance to address the climate situation — which is on the brink of becoming catastrophic. While world leaders say they’re united to steer the world in a better direction, actions will speak louder than words once they leave Glasgow.

Updated on Nov 16 to include COP26's major takeaways from the final agreement.