Derek Chauvin's Conviction: Why This Moment is Rare 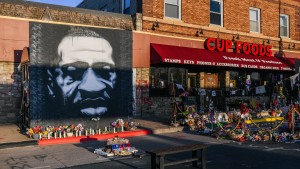 The jury in Derek Chauvin’s trial has found him guilty of murder and manslaughter in the death of George Floyd. Last year, Chauvin was charged with killing Floyd after kneeling on his neck for nine minutes and 29 seconds. Viral video of the incident showed the then-officer with his knee on the 46-year-old Black man's neck as Floyd cried out "I can't breathe" 27 times. In the aftermath of his death, Floyd's name and last words became a rallying cry at protests around the country and world, sparking conversations about systemic racism in the US.

On April 20, Chauvin was convicted of second-degree and third-degree murder, as well as second-degree manslaughter. In Minnesota, second-degree murder – the most serious charge he faced – carries a max penalty of 40 years in prison. He'll be sentenced on June 25. Meanwhile, in May, it came out that a federal grand jury indicted Chauvin – along with the three other officers involved in Floyd's death – on criminal charges for violating Floyd's civil rights.

This case has been dubbed one of the most important in US history. In part, because these types of convictions against cops are rare.

Law enforcement officers kill around 1,000 people a year in the US. But one study found only 121 officers have been charged with murder or manslaughter for on-duty killings since 2005. And only 44 were actually convicted. That number is low for many reasons, but a major one is police unions.

When an officer faces an offense – whether it be complaints from citizens or criminal charges – the union can provide legal representation. (PS: the Minnesota Police and Peace Officers Association funded Chauvin’s defense.) And they can also set the terms of internal investigations within the department. Experts say that can include how long police leadership must wait before they begin an investigation, how an officer can be questioned, and how long the department can investigate.

These terms have often left police chiefs with little power to fire or discipline an officer, even in cases of brutality and racism. Officers involved in killing someone may claim they feared for their life – a situation that is hard to prosecute, especially after a 1989 Supreme Court ruling said that an officer’s actions have to be judged from the perspective of an officer in that situation. And the data shows all of this has disproportionately affected Black Americans – who make up 13% of the US population, but one analysis found one-third of victims of police-involved deaths were Black.

Some are drawing parallels between Floyd’s killing and the arrest and beating of Rodney King. In March 1991 in Los Angeles, after King led police on a high-speed car chase, four officers kicked him and beat him dozens of times with batons, leaving King with skull fractures and permanent brain damage. A bystander filmed the incident, and it soon aired on people’s TVs across the country. The cops were charged with excessive use of force, but a mostly-white jury acquitted them in 1992 – sparking deadly riots that lasted days. Like Floyd’s death, King’s became a flashpoint in the fight for racial justice.

Some of the other setbacks...

Qualified immunity. It's a 1982 legal doctrine that protects police officers and gov officials from being sued if they were accused of misconduct. So while victims of police violence or their families may be able to sue police officers, a police department, or a city in a civil case, it doesn’t always lead to punishment for the defendant(s) because of qualified immunity.

In March, the House passed a police reform bill that includes an adjustment to qualified immunity to make it easier to sue officers in civil cases. But the Senate hasn’t voted on the bill yet.

Lack of police reform. There’s been a push for lawmakers to enact and law enforcement to enforce a number of police reforms that would not just help hold officers accountable, but also help end systemic racism in the US’s policing system. You can reach out to your elected officials to demand they take action on police reform.

Here’s where things stand with other victims' cases…

Over the past year or so, many Black Americans have been killed or harmed by police violence. Here’s where things stand with their cases:

Derek Chauvin's conviction is a landmark moment in the fight against police brutality and racial injustice. And it’s giving people hope that officers can be held accountable for their violent actions against Black Americans.

Updated on June 24 – Updated to include details on the federal grand jury indictment.