How Mothers Feel a Year Into the Pandemic: Poll 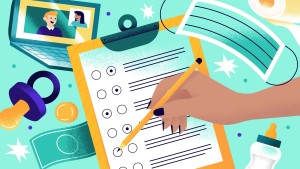 Throughout the pandemic (and frankly, even before), moms across the world have been stretched thin. Whether it’s deciphering what’s safe for themselves and their families, adjusting to work-from-home life, helping their kids with remote learning, losing access to childcare, or becoming a parent for the first time in an uncertain world – it’s been a mother of a year.

This Mother’s Day, we’re checking in with moms to find out how they’re doing. We polled more than 1,000 Skimm’r moms on how they’ve been feeling and dealing with the virus, a shecession, the balancing act of work and home life, and everything else.

A majority of Skimm’r moms (68%) said that work-life balance has been more challenging in the past year. And half admitted that working full time with children at home and managing childcare has been particularly difficult. While that may seem like no surprise, 48% of Skimm’r moms said that navigating the news has been more of a challenge, and 47% said a major issue was just staying safe. As the challenges pile up, so do the stressors.

In the six months before the pandemic, these moms said they frequently felt gratitude (47%), contentment (45%), and joy (41%). But in the last six months, they repeatedly felt exhaustion (70%) and anxiety (64%). Yet they also still had frequent feelings of gratitude (46%).

The balance of working and mom-ing

As one Skimm’r mom said in the survey: “mom-guilt is real.” And being a good remote employee and mother at the same time in the same place can be hard. Forty-eight percent of Skimm’r moms said their work situation changed during the pandemic, with 67% working from home when they never did before. While 12% and 10% respectively said they cut back their hours or left the workforce to take care of things at home. (Enter: the shecession.) Fifteen percent said they were furloughed or laid off from their jobs, and 6% opted to start a side hustle or new business.

The silver lining? Ninety-two percent of Skimm’r moms who became a parent during the pandemic said they were able to take maternity leave as expected.

The not-so-silver lining? Four percent were forced to leave their jobs to become a mother, 3% were only able to take a portion of their leave, and 1% said their company made it difficult to take mat leave as planned.

Over half of the women who responded to theSkimm’s survey (56%) said they handle the majority of their household’s tasks, including childcare. And while many said this was the case before the pandemic, 12% said this is new. One respondent wrote, “It's hard” because there are “no breaks and nowhere to hide. The kids are tired and feel the stress too, making it all more difficult.”

Childcare during the pandemic has been a major difficulty for many American families. Forty-three percent of Skimm’r moms are sending their kids to full-time in-person school or daycare – down from 57% before the pandemic hit. That’s a 14% drop-off over the last year. And without much choice, moms continue to look forward. Sixty-four percent said they are somewhat or extremely comfortable with their children going to full-time in-person school or daycare in the next three months.

Most Skimm’r moms were unimpressed with how the federal government has dealt with the pandemic. To put that into perspective, only 7% of the moms surveyed felt the federal gov had provided adequate support and assistance for mothers in the last 12 months.

And when it came to the expanded child tax credit under President Joe Biden’s American Rescue Plan, 37% were unsure if they qualified (we got you, check here to see if you do). Usually, the child tax credit is given in a lump sum after you file your taxes. But this year, it can be received monthly – and some may start receiving their checks as early as July.

Thirty-four percent of Skimm’r moms said they preferred the lump sum, and 21% said monthly payments would be more helpful. Meanwhile, a slim 12% would prefer that it be held and applied to their next tax return.

The answers panned out similarly when it came to vaccinating their kids. Fifty-nine percent of Skimm’r moms plan to vaccinate their children when they’re eligible. While 26% said they want to see more research, 11% were unsure, and 4% said 'pass.'

The good stuff: unwinding and relaxing

A majority (68%) of Skimm’r moms said going on walks helps them relax. And 60% found that same solace in exercising. Fifty-five percent said reading helps them find their zen, while 41% said cooking does the trick. Forty percent got into podcasts and 17% picked up meditation.

Moms deserve a medal (and flowers, a massage, breakfast in bed, and a lot more) this Mother’s Day. And as the pandemic continues, it’s important that we listen to them, hear their concerns, and take action to alleviate their stresses. One respondent summed up her emotions by saying: “I don't want to be a superwoman, I want to be a full-blown person who is also a mom.”