How You Can Help Tornado Victims in the Midwest and South 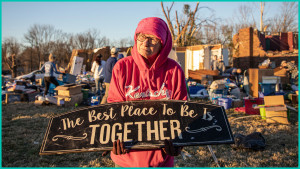 It’s not usual for the Midwest and Southern United States to see tornadoes during the winter. But in mid-December, multiple tornadoes and storms wreaked havoc across at least six states: Arkansas, Illinois, Mississippi, Missouri, Tennessee, and Kentucky. The death toll has reached 88. And 74 of those deaths were confirmed in Kentucky alone. But these numbers could grow in the coming day as rescue efforts continue. And some communities have been flattened as officials try to figure out exactly how much damage was done. But the road to recovery could be a long one. And those who have lost their loved ones and their homes need help.

What to Know About the Tornadoes’ Path of Destruction

Kentucky has been the hardest hit, particularly the western part of the state. The death toll there has reached 74 — including at least seven children. In Dawson Springs, officials estimate 75% of the city has been destroyed. One woman described “flying through the air” while on a mattress and trying to hold on to her kids.

About 75 miles southwest, Mayfield was also hit hard. The city’s mayor says there’s no running water or natural gas. Many buildings and homes in the city were destroyed, including a historic courthouse. And thousands across the state have lost power or heating.

KY Gov. Andy Beshear (D) called the storm “the most devastating tornado event” in the state’s history. He’s ordered flags to fly at half-staff for the victims. A judge executive in Graves County (where Mayfield is) said local officials are “in the trenches, trying to find people.”

Meanwhile, other states affected by the storm are making their way through the debris. And more casualties are being recorded. With at least four in Tennessee, two in Missouri, two in Arkansas, and six dead in Illinois. There, the victims were killed after an Amazon warehouse collapsed. OSHA is investigating what happened and could issue penalties if they find workplace safety violations.

In the meantime, recovery efforts are underway. President Biden has approved an emergency disaster declaration for Kentucky. And directed FEMA to offer additional federal resources and coordinate with local authorities. He’s also done the same for Illinois and Tennessee. The president plans to visit KY on Dec. 15 for a storm briefing, and will visit Mayfield and Dawson Springs.

Members of the National Guard are already on the ground, and working to remove debris in KY. Beshear, who lost family members in the tornadoes, has also reportedly pledged to provide $5,000 in burial expenses for families who’ve lost loved ones. But the road to recovery will also be pricey. AccuWeather estimates the tornadoes have caused about $18 billion in damages across the impacted states.

How to Help Tornado Victims

Organizations in the Midwest, South, and nationwide are doing what they can to support the tornado victims who’ve lost everything. Especially ahead of the holidays. And you can give back too. Here are some ways to help:

If you need more ideas, here’s a list of orgs you can support. And check out our tips on how to vet charities before you donate.

It's been a rough year for a lot of people. The pandemic is still taking its toll, inflation is rising, and some people have lost their jobs. Now, historic tornadoes and storms have caused hundreds of Americans to lose everything in a flash. They're left to rebuild their lives from the ground up, while mourning those they've lost.