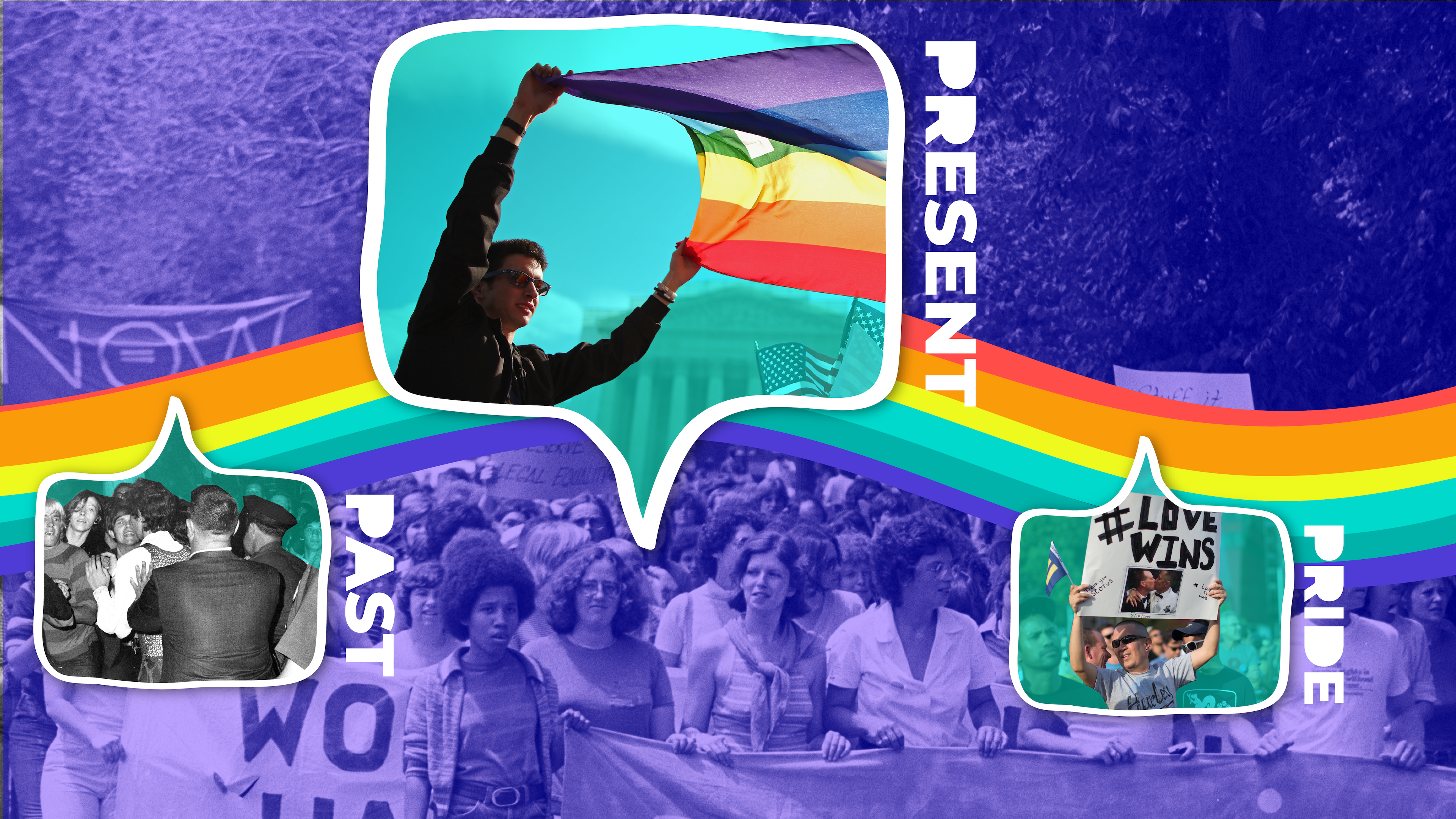 LGBTQ+ history in the US has had its ups and downs. We’re breaking down some of the biggest moments, and how they pushed the LGBTQ+ rights forward...or, in some cases, backwards.

The Society for Human Rights is founded, making it the first documented gay rights group in the US.

SCOTUS rules in favor of the LGBTQ+ community for the first time. The case: ONE – the first major pro-gay publication in the US – sued the federal government after the US Postal Service refused to deliver its magazine. The court sided with the magazine.

Police raid the Stonewall Inn, a popular gay bar in NYC. Customers fight back, leading to days of riots. This launches the modern gay rights movement. A year later, the first gay pride parade in the US goes down in NYC.

Lambda Legal becomes the first legal organization fighting for equal rights for gay and lesbian people in the US.

The American Psychiatric Association removes homosexuality from its list of mental disorders, helping to remove the stigma around it.

Gay rights pioneer Harvey Milk becomes the first openly gay man elected to public office in California. During his time in office, he uses his position to fight LGBTQ+ discrimination in the workplace. He’s assassinated a year later.

The first gay pride flag is unveiled in San Francisco, decked out in eight colors: hot pink for sex; red for life; orange for healing; yellow for the sun; green for nature; turquoise for art; indigo for harmony; and purple for spirit.

The CDC publishes a report on a rare lung infection in five gay men. Soon after, multiple news outlets – including the Associated Press, the Los Angeles Times, and the New York Times – report about the condition. The CDC starts getting word about similar cases around the country. It’s the start of what eventually becomes known as the AIDS epidemic.

Wisconsin becomes the first state to ban discrimination based on sexual orientation.

The Clinton administration implements “Don’t Ask, Don’t Tell.” It officially lets gay men and women serve in the military, as long as they don’t disclose their sexual orientation.

President Bill Clinton signs the Defense of Marriage Act, which bars federal recognition of same-sex marriages and defines marriage only as a union between a man and a woman.

Ellen Degeneres comes out as gay in TIME Magazine. About two weeks later, her character on her TV show “Ellen” comes out too, becoming the first leading character to come out on a primetime network show. About 44 million people tune in. A year later, ABC cancels her show.

Matthew Shepard, a young gay man in Wyoming, dies after two men brutally beat him and tie him to a fence in a prairie. His death symbolizes the dangers and difficulties that the LGBTQ+ community faces daily.

SCOTUS strikes down a law that criminalizes gay sex.

President Obama signs a hate crimes bill named after Matthew Shepard, which expands federal law to include crimes based on a victim’s sexual orientation or gender identity.

SCOTUS strikes down part of the Defense of Marriage Act from 1993 that prevented legally married same-sex couples from getting federal benefits.

SCOTUS rules that gay couples have the right to marry in all 50 states.

A gunman opens fire at a gay nightclub called Pulse in Orlando, FL. 49 people are killed, making it one of the worst mass shootings in modern US history.

President Obama designates the first national monument to LGBTQ+ rights: the Stonewall Inn and the surrounding park and streets.

The Obama administration announces it’ll lift the ban on transgender people serving openly in the military. It was seen as one of the last major barriers for people to serve.

President Trump announces a ban on transgender military members, a major setback in LGBTQ+ rights. He says allowing them in the military leads to "tremendous medical costs and disruption."

Where do things currently stand in the US?

There’s been some more progress, which was seen most clearly in the 2018 midterm elections when a record number of LGBTQ+ candidates won their races. But there have also been moves to backtrack on efforts to protect the LGBTQ+ community. The Trump admin has finalized rules that would make it easier for health care workers to deny care if it goes against their religious or moral beliefs – which critics believe could affect the LGBTQ+ community. A number of states and cities have sued over this. Meanwhile, the US Naval Academy announced it won’t allow transgender students to attend starting in 2020. And the Supreme Court ruled that the Trump admin’s transgender military ban could go into effect.

Speaking of the Supremes, are they taking up LGBTQ+ issues anytime soon?

Yup. The court’s taking up three cases on whether Title VII of the Civil Rights Act of 1964 protects LGBTQ+ people. The law prevents employers from discriminating on the basis of sex. But the question the Supremes have to answer is whether ‘sex’ includes sexual orientation and gender identity. Heads up: this is on the docket for the next term, so there may not be an answer until next year.

For decades, LGBTQ+ people and allies have been working to make sure the community has the same rights as everyone else. There’s still more work to be done to get to that point. But with more awareness around the struggles of the community, there’s hope that that could happen sooner rather than later.