Pride 2021: How to Celebrate Amid the Pandemic 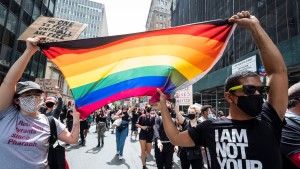 For years, June has been celebrated as Pride Month to honor the Stonewall riots. On June 28, 1969, police raided the Stonewall Inn – a popular gay bar in NYC. But customers fought back, leading to days of riots. (More here on the people behind the Stonewall revolution.) The uprising was a major turning point for the modern gay rights movement – and a year after, the first gay pride parade in the US went down in NYC. Over the years, pride parades and celebrations have been happening around the country and world, from NYC and San Fran to London to Sydney.

Last year was supposed to be a milestone year, marking the 50th anniversary of the US’s first-ever gay pride parade. Then the pandemic hit. And as the world came to a halt, so did the usual pride celebrations, with many getting canceled or turning to virtual events. But things are looking up for 2021: half of all US adults are fully vaccinated against COVID-19. And as of late May, cases have dropped to their lowest level in nearly a year. Now, celebrations are picking up again, though some orgs are still planning scaled-back events.

Here’s how to stay safe…

The CDC says that fully vaccinated people don’t need to wear masks indoors or outdoors, with a few exceptions. But the agency suggests that people who are not vaxxed should avoid large gatherings to prevent getting infected with or spreading COVID-19.

States are also making their own calls on safety precautions – so before you make a Pride game plan, check to see the restrictions in your state or city by checking your local health department website.

If you’re unsure of what to do, it doesn’t hurt to wear a mask and social distance at events. Or plan to celebrate virtually – whether that’s with friends and family, co-workers, or your community.

Here’s how Pride Month is being celebrated around the country …

And for those that want to participate from home, Them – an online LGBTQ+ publication – is hosting a virtual Pride Parade on June 22. Their editor-in-chief Whembley Sewell said, “I think one of the amazing things about the way we've been approaching pride at them and from other organizations is that it’s for the virtual lens. Whether you're someone who maybe isn’t out or someone who can't make it to pride or doesn't like large crowds, it definitely is much more accessible.”

How to support the LGBTQ+ community this month and beyond…

June is an exciting time to celebrate the LGBTQ+ community. But that doesn’t mean everything comes to an end on June 30. It’s important to keep the momentum going all year long. And here are some ways to do that:

Like pretty much everything else in life, COVID-19 impacted last year’s milestone Pride celebrations. Now, as pandemic restrictions lift, many people are excited to get back to the usual Pride festivities and celebrate the community. But remember that Pride goes beyond June’s 30 days – and society should be working to support people who identify as LGBTQ+ all day, every day.