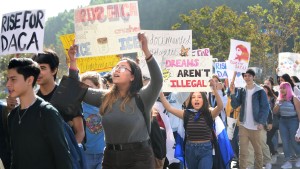 For nine years, an Obama-era program called DACA – which protects about 650,000 young immigrants from deportation – has faced many obstacles (think: it’s been cancelled, brought back, and reduced). And in July, it faced its latest challenge, when a Texas federal judge ordered the Biden admin to stop approving new applications, ruling the program illegal. The judge argued that former President Obama went beyond his authority to create DACA. But said current applicants weren’t affected, and applications can still be renewed. Biden said the Department of Justice will appeal. And earlier this year, he signed his own executive action for the Department of Homeland Security to look into ways to protect the program. With the legality of DACA constantly called into question, we’re breaking down everything you need to know about the program and its uphill battle to stability.

DACA stands for Deferred Action for Childhood Arrivals. In 2012, Obama created it through an executive action to temporarily stop deportations for people without citizenship or legal residency who were brought to the US as kids. Obama’s reasoning included Congress’ failure to pass the DREAM Act – which would’ve provided a path to citizenship for young migrants, commonly called “Dreamers.” Besides shielding participants from deportation, the program allows them to work or study in the US. Recipients can get driver's licenses and health insurance through an employer (or through the state in some places). But the protections only last for up to two years and don't include a path to citizenship. After that, participants must renew to continue to receive benefits.

Challenges Along The Way

What Each Side of the Aisle Thinks

Republican-led states (like Texas and Alabama) argue DACA burdens states with extra costs for health care, education and law enforcement. Anti-DACA activists (like former US AG Jeff Sessions) say immigrants in the program take jobs away from other Americans. (But that isn’t true.) Despite this, one study found that 75% of Republicans – along with 92% of Democrats – prefer giving DACA recipients a chance at citizenship. Those in favor of DACA say it’s not the childrens’ fault that they were brought to the US, adding that they should remain since the US is the only place they have ever called home. Economic studies have found that DACA participants contributed nearly $4 billion in taxes since 2017 and added about $42 billion to the US GDP. And taking “Dreamers” out of the workforce could cost the gov about $60 billion and decrease US economic growth by nearly $280 billion. Advocate groups have called on Congress to create a road to citizenship.

After the Texas federal judge’s ruling, Biden said the DHS will issue a new policy soon (TBD on when that is). And wants to carve a path to legal residency for all 11 million immigrants living without documentation in the US. Meanwhile, Dems in Congress are focusing on the American Dream and Promise Act – which sets up a way for DACA recipients to get legal status in the US. The bill has already passed in the House. But will need the support of 10 GOP members (and all Dems) to pass in the Senate. If that proves difficult, lawmakers want to add a pathway to citizenship to Biden’s $3.5 trillion spending package – which would only need a simple majority (all Senate Dems + VP Harris) to pass in the Senate. It’s unclear when either of those options will take place.

In the post-Obama era, DACA has constantly been put on the chopping block. Hundreds and thousands of “Dreamers” – who only know the US as home – have constantly had to leave their fate in the hands of politicians and courts. Now, as they once again face an uncertain future, the pressure is on for the Biden admin and Congress to finally find a solution.