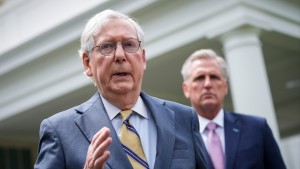 Which brings us to the question: How can a filibuster sink a bill before it gets a final vote? Enter...

Here's What You Need to Know About Filibusters

The US Senate's website says a filibuster (which is used exclusively in the Senate) is an "action designed to prolong debate and delay or prevent a vote on a bill, resolution, amendment, or other debatable question." Basically, it allows lawmakers to stall a motion indefinitely, potentially forcing the chamber to move on.

Filibusters have happened a number of times throughout history, regardless of what party controlled the Senate. The record for the longest individual speech was former Sen. Strom Thurmond from South Carolina: he filibustered for 24 hours and 18 minutes against the Civil Rights Act of 1957. And while the word filibuster might make people think of lawmakers talking for hours (like Thurmond), senators could reportedly trigger a filibuster by simply announcing that they want to block a bill. And the measure can be used on nearly any type of legislation, but doesn’t apply to judicial nominees (see: 2013 and 2017).

The way to end a filibuster: cloture. That’s when the Senate votes to limit the amount of time it will consider a bill or other matter. The chamber adopted the practice in 1917 amid growing frustration with long Senate speeches. Senators initially approved a two-thirds majority vote to invoke cloture, and lowered the threshold to three-fifths majority in 1975 – which still stands today. Meaning: any bill that has the support of at least 60 senators is essentially filibuster-proof.

Filibusters in 2021: Where Things Stand Today

Since Democrats took control of the Senate in January 2021, there’s been buzz around whether the party would change how filibusters work – because Dems only slightly control the Senate. The chamber is divided 50-50, with VP Kamala Harris acting as tie-breaker. In order for Dems to overcome the filibuster, they need at least 10 Republicans to vote with them. And, ICYMI, bipartisanship in DC isn’t that popular. So it can be hard for Dems to pass legislation, even though they control Congress and the White House.

All it takes is a simple majority to change filibuster rules. But even if Democrats wanted to move forward with doing so, they likely don’t have the votes. Sen. Joe Manchin (D-WV) wrote in an op-ed that he won’t vote to eliminate or weaken the filibuster, saying that: “The time has come to end these political games, and to usher a new era of bipartisanship where we find common ground on the major policy debates facing our nation.” Sen. Kyrsten Sinema (D-AZ) has also publicly spoken out against changing the filibuster. Similar to Manchin, she says the way to address partisanship is “for senators to change their behavior and begin to work together.” Sen. Minority Leader Mitch McConnell (R-KY) has said the partisan gridlock under previous admins would look like “child’s play” if Dems change up the rules. Meaning: changing the rules now could backfire for Dems if Republicans reclaim the majority after next year's midterm elections.

The filibuster is a gov practice that can be both useful and a headache for lawmakers, depending on which party is in control. Now, a change to this rule may be hard to come by – especially since Dems have a razor thin margin of control over the Senate. Looks like the filibuster is here to stay, for now.