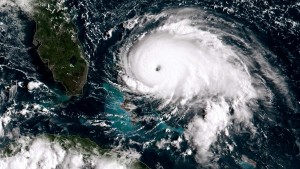 Summer 2021 has been no stranger to storms. See: Hurricane Ida, Tropical Storms Henri and Fred, Hurricane Grace. These events have wreaked havoc in the communities where they made landfall – including in places like Louisiana, where hospitals have been stretched thin amid Hurricane Ida and a spike in COVID-19 cases. And the Atlantic hurricane season (which started on June 1) doesn’t end until Nov 30. After that comes winter storms that could impact vulnerable states.

We’ve all heard weather forecasts that include words like ‘squall’ or ‘storm surge’ or ‘nor’easter.’ But let’s be honest: We don’t always want to admit that we don’t know what exactly those words mean. And since climate change is creating more frequent and intense storms, it’s important to know what type of weather is heading our way, so we can be prepared and stay safe. That’s why we’ve Skimm'd some of the most common storm-related terms and ones that seem to be new. You’re welcome.

Weather reports could include words like ‘winter storm watch’ or ‘tropical storm warning.’ The National Weather Service issues alerts to give people a heads-up if or when certain weather events (including blizzards, hurricanes, flooding tornadoes, tropical storms, and more) are happening, about to happen, or possible. The three types are…

Storms – whether in the summer or winter – can be dangerous, intense, and scary. But knowing the terms around them and how they work are important steps in keeping you and your loved one safe. Make sure you’re prepared for hurricanes or tropical storms and winter storms.