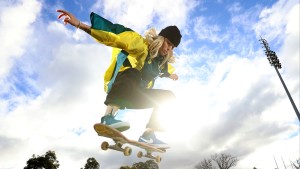 Gymnastics, swimming, and track and field are the typical stars of the Olympics. Producing some of the biggest names in the world (think: Simone Biles, Michael Phelps). But now, there are some new kids on the block. The International Olympic Committee has added six new sports (34 events in total) to the roster. And they’re debuting at the Tokyo 2020 Olympics. The org’s hope is younger audiences will tune in to watch.

Skateboarding…There will be two disciplines: Street, where athletes take on obstacles (think: rails, stairs, slopes) and do tricks during a set time limit. Park, where skaters will perform mid-air tricks on a hollowed-out course. Eighty athletes will be competing for four medal events. And if these Olympians look young, it’s because they are. Sky Brown will be repping Great Britain and is only 13-years-old. And keep an eye out for their unique uniforms (which got some buzz before the Olympics were postponed).

Surfing…The surfing competition will be held in the pool after the swimming competition is complete. Just kidding – it’ll actually be held at Tsurigasaki Beach (about 100km away from the Olympic Stadium in Tokyo). Surfers will compete in 30-minute heats to try to catch as many waves as they can. But only their two highest-scoring waves are counted via a five-point system. Judges will be looking at the degree of difficulty, innovation, speed, power, and flow. It’s also in a knockout format with 20 men and 20 women competing. A lot of established big names will be competing like Carissa Moore, Stephanie Gilmore, and Kanoa Igarashi.

Karate…The sport originated on the Japanese island Okinawa. Athletes will compete in two disciplines at this year’s Olympics. Kata is a solo discipline, competitors will be judged on a series of pre-approved choreographed movements. Kumite is a combat discipline, athletes will face each other in three-minute fights. There will be 80 athletes competing, including Spain’s Damian Quintero who quit his job as an aeronautical engineer to focus on karate when it became an Olympic sport.

Sport climbing…There will be three different types of climbing. Speed will feature two climbers who will scale a 15-meter high wall, side by side. And the first one to the top wins. In bouldering, climbers will complete a set number of routes on a 4.5-meter high wall (without a safety rope). And lead climbing will show athletes trying to get as high as they can on a 15-meter wall in six minutes. In total, 40 climbers will be at the Tokyo Olympics.

Baseball and Softball...Technically, these aren’t new events at the Olympics. But they haven’t been part of the games since 2008. The IOC threw them out because of a lack of global interest. But they’re back this year. There will be six teams in each sport. And as for Team USA, some of the biggest names in the MLB won’t be in Tokyo since the games clash with the ongoing season.

Like much of the world, sports are changing. Our notion of who is considered an athlete, what’s considered a sport, and more is evolving. And like many old-school institutions, the IOC needs to keep up if they want people to tune in.