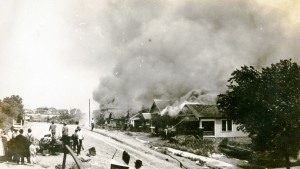 President Trump is holding his first campaign rally in months in Tulsa, OK on June 20. It’s raised concerns for several reasons. It was initially scheduled for June 19. But he moved it after receiving intense criticism for planning to hold a rally on Juneteenth, the holiday commemorating the end of slavery in the US. Still, the location of the rally is significant.

In 1921, Tulsa was the site of one of the worst acts of racial violence in US history. Here’s what you should know:

A Tulsa neighborhood called the Greenwood District became known as “Black Wall Street.” It was an affluent Black community with hundreds of Black-owned businesses and residents.

Rumors started spreading about an incident between a young Black man and a White woman in an elevator. It’s unclear what exactly happened, but the man was arrested the next day.

As rumors spread about a possible lynching, a group of Black and White residents confronted each other outside the courthouse where the man was being held. Shots were fired. A White mob followed the Black group as they retreated to the Greenwood District.

According to the Tulsa Historical Society and Museum, White rioters attacked Greenwood for 24 hours, burning and looting the neighborhood. They destroyed more than 1,200 homes. 36 deaths were reported, but historians now think as many as 300 people were killed.

The Tulsa massacre has been largely unacknowledged over the years. It was only earlier this year that the state said it’s going to start including it in school curriculum. And the city of Tulsa is still investigating possible mass graves tied to the massacre. All of this context serves as the backdrop for Trump’s rally. And comes amid weeks of protests across the country against systemic racism.

After months of hunkering down, Trump wants to get his 2020 campaign back on the road. Oklahoma is a deep red state that is far along in its reopening amid COVID-19. It’s also a painful reminder of America’s racist history.