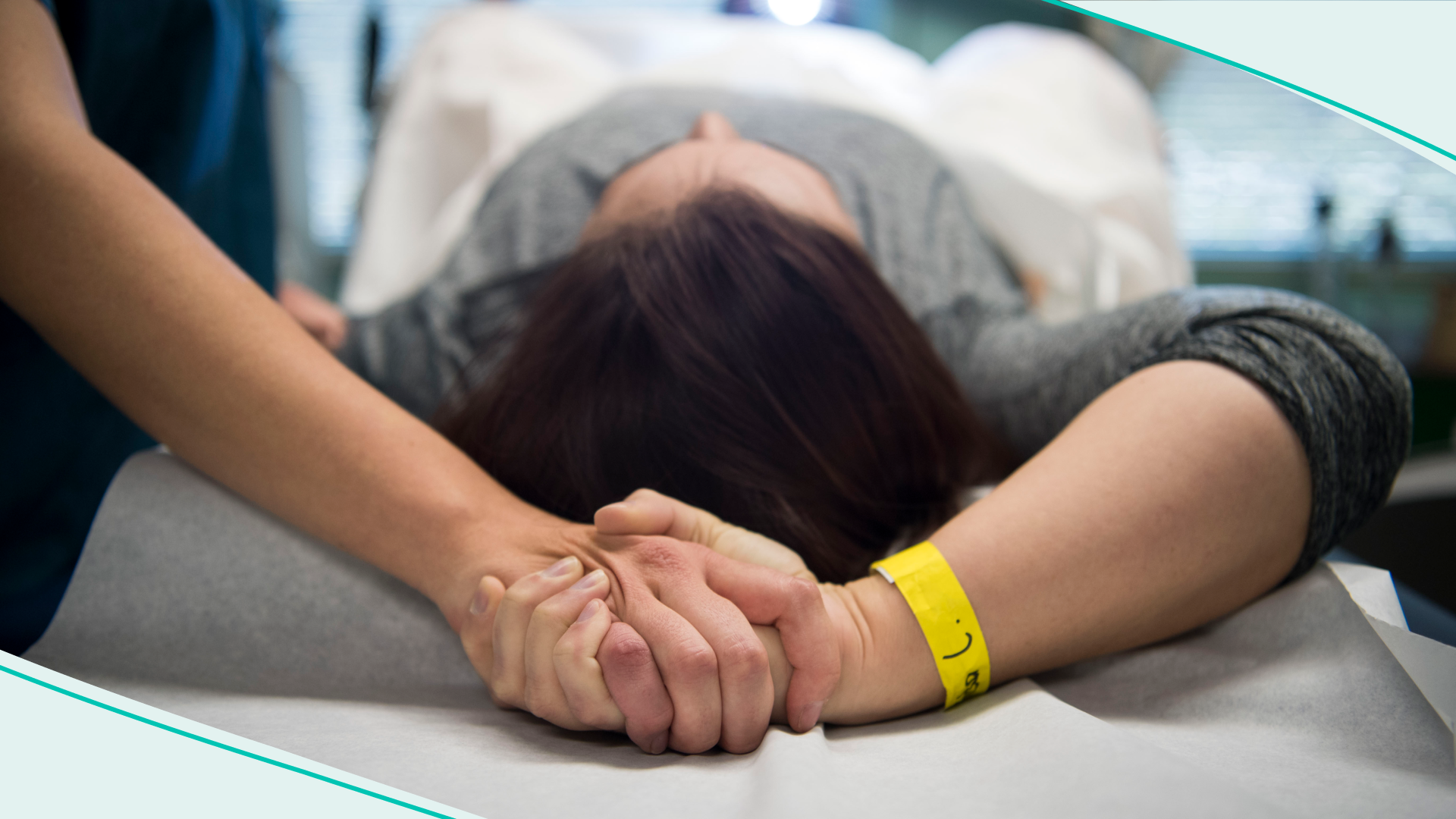 ‘A Doula Has One Job: It’s You.’ An Abortion Doula On Her Work And What The Future Looks Like After Roe.

For years, abortion doulas have helped people navigate a procedure that’s been at the center of political debate. Now, one woman is sharing her journey to becoming one. And what the future of her work looks like in a post-Roe America.
Photo: Getty Images
fbtwitteremail
Jul 19, 2022Skimm'd by Maria del Carmen Corpus, Maria McCallen, and Kamini Ramdeen-Chowdhury

The Supreme Court’s decision to overturn Roe v. Wade has led to an ever-changing abortion landscape. It comes as states either restrict, ban, or protect rights to the procedure. One thing that hasn’t and won’t change: Abortions won't stop. People will need access to these services for a variety of reasons. And their need for support, comfort, and care has become more important than ever.

Enter: abortion doulas. Similar to more commonly known doulas, they provide physical, mental, and emotional support to people who are ending a pregnancy. It’s unclear how many abortion doulas there are in the US, since the field isn’t regulated. This type of doula can volunteer with an abortion clinic. Or offer their services for a price.

To find out more about abortion doulas, theSkimm talked to Lisa Hamilton from Brooklyn, NY. She's a five-year veteran of the field, who shared how she got started, what a typical workday is like, and how Roe's reversal could impact her work's future.

“I [supported] my mother during her death. I found that I was really good at it, and I was very comforting for her. We didn't have a fantastic relationship, so it was a very special [and] almost spiritual moment for me to be able to truly be there. I sought out education to be a death doula. But then [in my research online], I found out about abortion doulas.

“I've had more than one abortion. But when I had my first abortion [at 16 years old], it was very traumatic because it had to be a secret. I couldn't let my family know. I couldn't let people at school know. I was full of fear, by myself, and there was just no comfort at all. It was really scary. If I had someone there with me holding my hand, telling me what was going to happen next or what I should expect to feel, it would've gone much better.

“I applied for training through an agency to be an abortion doula. Then through another agency, I got birth training. So, I’m a full-spectrum doula — someone who's there to hold space for and help to guide somebody through anything that happens in pregnancy. [That includes] prenatal, birth, postpartum, abortion, miscarriage, [and] any sort of pregnancy termination of any kind.”

What a day as an abortion doula can look like

“We [abortion doulas] sign up for shifts at a facility [like a clinic]. Then, we're given a client's file. We escort them into the room, give them a gown to change into, and tell them how to wear it. We ask them if they have any questions that we can answer. We hold the medical questions for the doctor. But we give them a basic idea, if they ask what they may or may not feel.

“During the procedure, if I notice their oxygen level going down, I'll say take a nice deep breath [or] breathe with me. I'll do some sort of meditation [or] yoga breathing. Give them a hot pack or a cold pack. Hold their hand. [If] people cry, I give them tissues. Some people are perfectly fine and we have conversations all the way through — we’ll even laugh. It's not a morbid atmosphere. It's a very positive client atmosphere. They set the pace, and we keep it light and quick.

“Then, the nurse will take them into recovery. I'll meet them there with their clothes and belongings. I'll give them some juice or soda and crackers or cookies. Hold their hand. Then, usually it’s a hug and we say goodbye. For the most part, people are really thankful. The thing that I see the most is gratitude. And just ‘Wow, I didn't realize how much I would need somebody there with me.’ Or, ‘I didn't realize how simple this was gonna be. I'm fine.’

How human rights are at the center of abortion doulas’ work

“[To become an] abortion doula, I received a lot of physical and political information. A lot of the focus of [being a doula] — especially with volunteer work — is more human rights-oriented. Making sure that the person is being treated with dignity and respect. And cared for in the way that everyone should be. There's a huge discrepancy in how people of color and white people are treated in medical situations. It's important for us [abortion doulas] to be educated on that and to be able to advocate [for them]. So, we go through training, we do some practice sessions, and then we're put to work.

“The thing that makes doulas important and so vital for the pregnant person is that a doula has one job: It’s you. Whereas a doctor, they're there for you but they have a medical job to do. With a nurse, it’s the same thing — they have other things that they need to be concerned about. A doula is completely there for your feelings, needs, comfort, and nothing else. I often say to people in the room, ‘I'm here just for you.’ So that [also] includes telling me to get lost if you find that it's not comforting for you. I'm not gonna be offended.”

The rewards, challenges, and misconceptions of the job

“It can be draining if someone is very, very upset and you are holding space for them. Sometimes it hits you. But mostly, it's really rewarding knowing that I'm comforting somebody who's going through something that maybe they can't talk about with anybody else. I think the biggest problem is the stigma, backlash, and [anti-abortion] protests. What people have to go through to get to a clinic and an abortion is just abusive [and] demoralizing.

“I can't even tell you how many abortions I've attended. Hundreds. [I’ve] never seen a baby, fetus, [or] an embryo. People want abortions. They don't all do it reluctantly or with sadness. For some people it's not traumatic at all. I guess the thing that is the most surprising is how simple it is. People are okay. I think there's a lot of misinformation around that to upset people and get them to say, ‘This is horrible.’

“A lot of [people] that come in have two, three, or four children. They can't have another child — either physically, economically or emotionally. They don’t have that space. To expect that women shouldn't have sex for pleasure. And that they should be forced to carry babies that they — and no one else — are not ready to care for, that's not pro-life. That's inhuman.”

What Roe v. Wade’s reversal means for the future of Lisa’s work

“When I first heard [about the ruling], I was just numb. It just seems so unreal. Abortion has been legal for the majority of my life. I couldn’t even imagine — until now — a world where it wouldn't be. My reaction now is just anger. People are going to die. And people are gonna be forced to have children that they are not prepared to take care of. And that affects all of society. It has a negative effect on society morally, economically, criminally.

“The future of abortion is medication abortion. Doulas are being trained now to support that. And also to support in ways where maybe we don't know who the client is and they don't know who we are, we just support each other. Abortion is gonna happen no matter what the law is. And doulas who are dedicated are going to be assisting people and supporting them through it.”