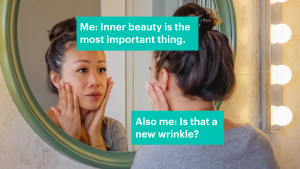 The anti-aging market is estimated to take in tens of billions of dollars in global sales every year. But the movement to look younger isn’t exactly young: It’s been around for-ev-er.

Hundreds of years ago, Cleopatra was taking baths in donkey milk to keep her skin supple and soft. Fast forward to the early 1900s, and beauty brands like Elizabeth Arden were marketing products that could “prevent” aging. By the ‘30s, soap company Palmolive named a condition that it said women as young as 22 could suffer from: “middle-age'' skin. Then in the ‘80s, many people tried to get a “healthy glow” with tanning beds, not knowing it would lead to more wrinkles. Now, “anti-aging” products are back in the spotlight, with the “no makeup makeup” look of the last decade actually coinciding with the growth of the skincare market. In 2019, two years after Allure announced it would stop using the term “anti-aging,” one industry survey showed that more than half of 18 to 24-year-old women wanted to add anti-wrinkle products into their routines. And millennials have become a huge market for anti-aging products (which are also sold with phrases like “regeneration,” “renewal,” “radiance,” and “vitality”). Social media isn’t helping.

Yep. Most people don’t naturally have huge eyes, big lips, a thin nose, high cheekbones, and smooth skin. But apps like Facetune (which has been downloaded over 60M times) make it so that everyone looks doe-eyed and airbrushed in their selfies. Now, many people want to look that way IRL. Enter: the Botox boom. The temporary anti-wrinkle procedure — which involves injections that block nerves from sending signals to muscles to contract — is the most common cosmetic procedure. It’s minimally invasive, especially compared to a facelift, which requires going under the knife. Yes, guys are doing it, too.

And you didn’t even mention “Zoom face.”

There’s that. Video chatting has made many people fixated on their own faces, wrinkles and all. And this focus on perceived flaws could lead to “Zoom dysmorphia,” according to a recent survey of dermatologists. And a group of facial plastic surgeons says that 2020 may have marked the “full millennial takeover of the aesthetic industry.” Demand is going strong for procedures such as "preventative” Botox (which is meant to delay wrinkles, because the skin isn’t contracting to create them) and fillers (substances injected beneath the surface of the skin to add fullness). Other reasons aesthetic procedures are gaining popularity: Celebrities from Kylie Jenner to Kelly Ripa and Angela Bassett are open about their injectables, and some people have savings that they didn’t spend on travel and entertainment last year to put into their faces. Plus, masks and WFH rules gave people the option to discreetly recover from a procedure.

Why do so many millennials want to look younger?

Well, for one thing, people often look to make major changes in their appearance after stressful events. But humans have been looking for the Fountain of Youth for centuries. Then there's the societal expectation that getting (and looking) older is undesirable. The phrase “she looks good for her age” didn’t just drop out of thin air. So it’s not surprising that a 2018 UK report found that millennials have by far the most negative attitudes to aging of all age groups, with nearly a quarter of millennials surveyed believing that being unhappy and depressed is a normal part of old age. Even today there’s an industry that’s aimed at using AI to reverse aging. (No, scientists still haven’t found a way to do it.)

Wow. Please give me some good news.

Age ain’t nothing but a number. But really, a number of people are now living with a chronological age (actual number of birthdays) that’s older than their biological age (age their body seems based on things like organ function). Plus, the average reproductive age for women may be increasing and many people have their best career successes later in life. Case in point: Serena Williams is one of the top tennis players in the world at age 39, Vera Wang started her career as a wedding dress designer at age 40, and Kamala Harris became VP at age 56.

Ok, I’m ready. What lines can I expect to see soon?

Reminder: You’re not a porcelain doll or a walking Insta filter. You could see some dynamic wrinkles (from expressions like smiling) and static wrinkles (from when your skin starts to naturally get less elastic), like...

But should I be concerned about my wrinkles?

PSA: Wrinkles aren’t inherently bad for your health. And they can make for a more inviting, expressive, and sincere face. Quick science lesson: As you age, your skin starts to naturally lose its collagen and elastin. Read: its firmness, plumpness, and ability to bounce back when stretched. Those proteins can break down faster with sun exposure. So wearing hats and sunscreen that’s SPF 30 or more could help protect against UV rays and prevent wrinkles, dark spots, and skin cancer. A nutritious diet is good for your skin health, too. Unsurprisingly, pollution is not. And here’s the thing about many aesthetic procedures: They’re temporary. Though fillers can last for six months to two years (depending on the kind), Botox only works for about three months. Which means wiping out lines could also mean wiping much of your bank account — procedures could cost $300 to $2,200 a pop.

Are there less invasive ways to prevent wrinkles?

Stress less and sleep more. Easy enough, right? Genetics also play a major part, but here are things you can do: wear sunglasses to help you squint less (could mean fewer eye wrinkles), and stop looking down at your phone already, so you don’t get “tech neck” lines. Besides sunscreen, Dr. Nazanin Saedi, a Philadelphia-based cosmetic dermatologist, recommends retinoid cream (either OTC retinols like this one or this one that you might know as acne treatment), or a more potent prescription retinoic acid. As long as you’re not pregnant or breastfeeding. Another rec if you’re OK with spending at least $100 more on skincare: a peptide cream, like this one, which boosts collagen and elastin production to keep your face looking full. And if you’re looking for something gentler, keep an eye out for lactic acid and glycolic acid.

The anti-aging movement is centuries in the making, but don’t let the marketing fool you: You can’t stop aging. Nor should you. And embracing your wrinkles and working to normalize aging could be a good thing. Still, if you’re concerned about lines on your face and know you’d feel more confident without some, you can talk to a derm about your options, from lifestyle and skincare recs to cosmetic procedures.