Miscarriage: How Common It Is, Recovery, and 'Rainbow Babies' 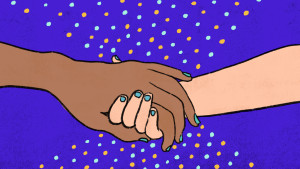 The Story
For so long, miscarriages have been suffered in silence. But we need to talk about them.

What exactly does ‘miscarriage’ mean?
Clinically speaking, it’s the loss of a pregnancy before the 20th week. If it occurs in the first few days of pregnancy, it’s called a chemical or biochemical pregnancy. It’s sometimes referred to as “pregnancy loss” and other times as “spontaneous abortion” (yes, that’s a medical term).

This is a tough subject.
That’s why it helps when we (and celebrities like Michelle Obama, Meghan Markle and Chrissy Teigen) talk about it. Keeping quiet about pregnancy loss leads people to believe that it’s rarer than it actually is, and makes sufferers feel isolated and alone. An Obstetrics & Gynecology survey found that respondents thought miscarriage only occurred in 5% or fewer pregnancies. The reality is way higher: Up to 20% of known pregnancies are lost. And about 80% of them happen in the first trimester.

Wait. It's really that common?
Yes. Meaning chances are you know someone who has gone through it. According to a 2019 study, miscarriage risk is lowest for women 25-29, and highest for women 45 and over. And there are studies that suggest that Black women have a greater risk of miscarriage than white women. (Systemic racism in health care likely factors into it.)

What causes miscarriage?
Let’s make this clear: It is not your fault. Pregnancy loss has nothing to do with what you ate or how much you exercised. It’s usually about chromosomes. Most miscarriages occur because of chromosomal abnormalities in the developing embryo. Meaning there’s likely nothing you could’ve done to change the outcome.

What could make someone more susceptible to miscarriage?
There are some factors to consider. Smoking is bad for pregnancy, because it can damage an embryo’s developing tissue. Heavy alcohol and illicit drug use should also be avoided. Conditions like PCOS, unmanaged diabetes, antiphospholipid syndrome, and bacterial vaginosis could increase your risk. And, as we mentioned before, age can play a part. At age 40, at least a third of pregnancies are lost. At 45, it’s more than half. Unfortunately, cases of miscarriage appear to be increasing. Some scientists blame this and other fertility problems on the chemicals that interfere with hormones in the body found in everyday objects.

Let’s talk about what you experience after pregnancy loss.

What’s a ‘rainbow baby’?
That’s what some people call it (and hashtag it) when they deliver a healthy baby after miscarriage or infant loss. Think of it as the beautiful sky after the storm. Good news: There are a huge number of rainbow babies out there. Most women who experience pregnancy loss can ultimately have healthy pregnancies. Although you might need more time to recover mentally, in some cases, women start ovulating as soon as two weeks after a pregnancy loss, and have their period back in four to six weeks. One study found that women who tried to conceive within three months of miscarriage were more likely to become pregnant and have a healthy birth than those who waited longer (One theory is that their bodies were already “primed” for pregnancy.). But many docs recommend avoiding sex and not using a tampon for two weeks after miscarriage.

What if I have another miscarriage?
Unfortunately, repeat pregnancy loss does happen. 1%-5% of women trying to have a baby will miscarry more than once. There could be a number of causes for this, including translocation (when one partner, who has no sign of an issue, has a piece of a chromosome transfer to another chromosome), uterus complications such as a septate uterus (when a wall of tissue creates a divider in the uterus), and Asherman syndrome (when there’s scarring in the uterus). After a third miscarriage, many docs will recommend post-miscarriage testing to help determine a cause.

I’m struggling.
Losing a pregnancy can trigger feelings of grief. But talking it out could help. In one study, cognitive behavior therapy was shown to be potentially useful for women with recurrent miscarriage and depression and/or anxiety. In another, having a support system was correlated with limited cases of depression during and after pregnancy. There are plenty of online communities and support groups on sites like resolve.org, pregnancyloss.org, and MEND.org. And consider teletherapy (we have a guide for that) so you can discuss your situation with a professional, even from home. You might also want to open up to close friends and family members, even if they might not know what to say at first. Know that the U.S. doesn’t currently require employers to provide leave for miscarriage (like India does and New Zealand just approved). But that doesn’t mean you shouldn’t give yourself time to heal.

What should you say to someone who’s experienced pregnancy loss?
If you have a friend going through it, be honest. Tell them you don’t know what to say, but you’re there for them. Avoid phrases like ‘it wasn’t meant to be,’ or ‘at least you were able to get pregnant.’ Those kinds of sentiments can come off as more hurtful than helpful. Don’t minimize their experience. Listen.

theSkimm
Having a miscarriage is a valid worry for any expectant parent, and unfortunately, could become a reality. But you don’t need to go through it alone. Reach out to loved ones and health professionals to get the support you need to properly take care of yourself and grieve.

theSkimm consulted with Dr. Natalie Crawford and Dr. Temeka Zore, both OB-GYNs and REIs, for this guide.