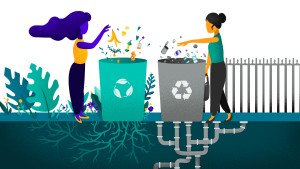 The Story
You’ve heard that recycling and composting are good for the environment. But you might need some advice on how to be a better eco friend.

Let’s start with the basics.
Recycling is when something that could be thrown away is instead collected and turned into something new. If you count creatively reusing products as recycling, then people have been doing it for hundreds of years. At first, it was mostly done because new materials were scarce. Recycling then became a major part of the environmental movement in the 20th century, when landfills were filling up. Waste needed to be managed, and in 1970, the EPA (which now regulates recycling) and Earth Day were created. In 2018 (the latest EPA data available), 69 million tons of garbage was recycled out of about 292 million tons of total waste (that’s 4.9 pounds of trash per person per day...ew). There aren't any federal recycling laws, so state and local govs are responsible for it (see: plastic bag fees and plastic straw bans). Thing to know: several states are considering laws that would have the burden (see: cost) of waste management fall on manufacturers.

How do I recycle?
One study estimates that about half of Americans have access to curbside recycling. That’s when you bring recyclables to the curb to be picked up and dropped off at sorting facilities. You can also bring stuff to a drop-off center. In some states, some bottles and/or cans can be taken to a redemption center, sometimes in exchange for a few cents per container. Search the Earth911 database for info on ways to recycle near you.

What gets recycled?
That’s complicated. But typically a curbside program will accept paper, flattened cardboard boxes, cartons, aluminum cans, glass bottles, and plastics that are clean and dry and have the numbers 1 or 2 and sometimes 5 on them. Heads up: numbers 3, 4, 6, and 7 typically can’t be recycled through curbside pickup, even if they have those arrows we associate with recycling. Eye roll. Styrofoam and egg cartons could also go either way so check with your recycling center. Pizza boxes can be fine unless they’re greasy and cheesy. Rip them in half and recycle only the clean top part in order to avoid contaminating what else is in the bin. Typically dirty napkins/paper towels (which are sometimes compostable) and mirror glass don’t pass go. And to make things even more confusing, you’ll probably need to separately sort and drop off things like plastic bags and film (use this link or this one to find a location), ink cartridges (some spots are listed here) and batteries (search for local collectors here).

I’m taking notes. Anything else?
China used to take a lot of America’s recycling. But they announced restrictions on what waste they’d import in 2017. Since then, the price tag to recycle in the U.S. has gone way up, and some local govs have had their recycling incinerated or sent to landfills to save money. But most people agree that when it’s done right, recycling is clean and green. That’s because it reduces the amount of landfill material and carbon emissions. However, if you lose yourself and toss your Starbucks cup into the wrong recycling bin, there are consequences. Incorrectly recycled items can contaminate otherwise fine recyclables and can damage sorting machines. According to one estimate, 25% of what’s put in recycling bins shouldn’t be. And that number has probably gotten worse in the pandemic. When you want to be a good recycler in theory, but produce extra waste instead, that’s called wish-cycling. We wish we didn’t have to tell you that.

Now explain composting.
Compost, Aka black gold, is decayed matter, often a combo of food scraps and yard waste, that can be added to soil. People have used organic material for farming since at least the Stone Age, through the American Revolution (George Washington was a known composter) until today. Now, a number of individuals, home gardeners, cities with municipal operations, and private facilities compost. In 2018, nearly 25 million tons of material was composted. But the EPA estimates about 3x that could have been.

How do I do my part?

theSkimm
Like anything that matters, recycling and composting might take some effort. But even small changes to reduce your daily waste count as a win for planet Earth.