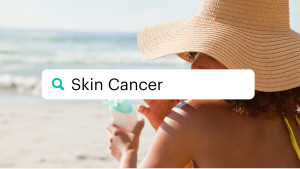 Your body’s a wonderland...of moles, freckles, and dark spots. But before you Google, “What does skin cancer look like,” know the facts.

Let’s start with the basics. Skin cancer is…

It depends. Each of the three major types has different features.

Usually, not much. Skin cancer doesn’t typically come with pain, at least at first. It can itch, but that’s not a requirement. Spotting skin cancer is all about its visual presentation.

Some of the conditions that can be mistaken for skin cancer include:

If you still think you have skin cancer, you should...

Go to your dermatologist. They’ll take a biopsy of the growth to determine the diagnosis. You should see a derm if you notice a spot on your skin that differs from others, bleeds, itches, or has changed over time. Check your insurance provider’s site to see whether you’re covered for an annual skin care screening. If not, some clinics might offer them for free. And if you’re looking for a dermatologist, check here for options.

About one in five Americans will develop skin cancer in their lifetime. It’s common — and in many cases, preventable. Wear SPF, find your shade, know your skin, visit your dermatologist, repeat.