Millennial women and politics: Their thoughts on 2020 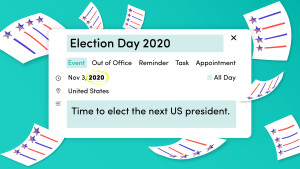 We’re one year out from the 2020 election, and millennial women have mixed emotions.

How do you know?

And...where are their heads at?

They’re feeling both hopeful and anxious. Two-thirds are dissatisfied with the way things are going in the US. Since the 2016 election, things have been, uh, fraught.

Sure sure. The encouraging news is, in the last few years, 29% of millennial women say they’ve had a meaningful convo with someone who has different political views. Progress. But on the flip side, 30% have stopped following or blocked someone on social media over politics.

Still, millennial women are overall ready to hit the polls. Nearly eight in 10 feel at least somewhat informed and 65% say they plan to vote in the 2020 election. But a little more than a third say they’re not certain they’ll show up.

A few reasons. Some think their vote won’t make a difference (psst: it will). Some don’t feel informed enough to fill out a ballot (we can help with that). Others aren’t amped about who they have to choose from. That said, if the election were held today, they have an idea of the decision they’d make.

Millennial women would vote for the Democratic candidate over the Republican candidate by a 2-1 margin. But the majority of those who like to party with the GOP would vote for President Trump.

What about the Dems?

There’s no clear frontrunner. But they have some favorites: First, Sen. Bernie Sanders (I-VT), then Sen. Elizabeth Warren (D-MA), and followed by former VP Joe Biden. But they’re not necessarily voting in 2020 primaries based on who they think can win the general election. Just 20% of millennial women say electability is the most important quality in a candidate. Instead, they’re voting based on trustworthiness, ability to work across the aisle, and where the candidates stand on the issues.

Was wondering when you were going to get to the issues.

This is where millennial women don’t exactly see eye-to-eye based on their party affiliation. For Republican-leaning millennial women, national security and the economy keep them up at night. For Dem-leaning, it’s health care, personal safety (think: gun and school safety laws), and the environment.

Some of these issues could make or break a candidate. For example, among millennial women who say healthcare is important, 41% say it’s a deal breaker if a candidate feels differently from them about lowering the cost of healthcare and prescription drugs.

The data shows that as we get closer to the election, millennial women feel more informed. And that’s crucial for getting out the vote. Because those who say they feel in the know are more certain about casting a ballot next November. So read up.

Survey Methodology: This SurveyMonkey online poll was conducted October 1‐4, 2019, among a national sample of 11,228 adults, including 1,067 millennial women (23‐38 year‐olds). The modeled error estimate for this survey is plus or minus 2 percentage points. Among millennial women, the modeled error estimate is plus or minus 4 percentage points. Data have been weighted for age, race, sex, education, and geography using the Census Bureau’s American Community Survey to reflect the demographic composition of the United States age 18 and over.