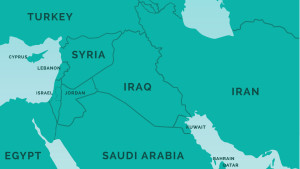 The Syrian Civil War timeline has been going on for...

happening across the Mideast. Anti-government protests broke out. Syrian President Bashar al-Assad did NOT appreciate these and responded with a

, torturing and killing those who disagreed with him. This prompted protesters to form groups, and to eventually arm themselves against him. Soon, this was a full-blown civil war, with

at least a thousand rebel groups

I remember something about chemical weapons?

For a while, there were rumors of both sides using chemical weapons. Then, in August 2013, graphic images surfaced that appeared to show a massive

on civilians in Syria. The US and friends freaked out, and

. Assad blamed the rebels. For a second, it looked like the US was on the brink of military intervention in Syria. Until the UN and Assad

were killed in a chemical weapons attack in northern Syria. All signs pointed to Assad's forces. President Trump responded by ordering an airstrike on the Syrian air base where the attack originated from. This was the US's

Tell me more about the groups involved.

Well, one of them is ISIS. But Assad’s been more focused on

, who’ve made it their explicit mission to take him down. A lot of the fighting has been concentrated in the key city of

ISIS has been indirectly helpful

to Assad since it has been fighting off the other rebel groups. So Assad has mostly let ISIS do its thing, which has helped the group grab more land and become even more powerful. So powerful that in 2014, the US and friends intervened in Syria

for the first time with airstrikes

What do people think?

...Team moderate rebels. Aka the ones that have been

crowded out by more extreme groups

. It wants Assad and ISIS gone STAT. In late 2014, former President Obama made the decision to

for the first time. But some argue that not arming and training Syria’s rebels years ago

for ISIS to thrive. Then in July of 2017, Trump decided to end a covert program that had

trained and armed rebels since 2013

...Team Assad. Russia is one of Assad’s most important allies for a

. One, it has a naval base in Syria that gives it access to the Mediterranean. Two, Moscow makes a lot of money from arms sales to the Syrian military. Three, it doesn’t like the idea of Western powers meddling in the region. In late 2015,

...Team Assad. As the most powerful Shiite country in the Mideast,

Iran has an interest

More than one million

Syrian refugees have camped out in Turkey, which is a strain on its resources. Meanwhile, Turkey’s been working with the US to

rebel groups. Recently, the US-Turkey relationship took a turn for the worse when the US also started

in the region. Turkey has a long, violent history with Turkish Kurds and sees this as the US aiding their enemy. That's led to clashes

A civil war in a country the size of Washington state has turned into a massive humanitarian crisis.