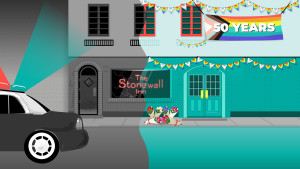 Fifty years ago this week, on June 28th 1969, police raided a little bar called the Stonewall Inn in New York City’s Greenwich Village. The events that took place after that raid shaped the modern LGBTQ+ rights movement as we know it today.

Okay, back up. Why is Stonewall such an important place in LGBTQ+ history?

It wasn’t all that back in 1969. It was just one of the few bars in New York where gay and transgender people could hang out and be themselves. The 1960s wasn’t a great time to be out in the US. Even in more metropolitan areas like New York City. Downside: Sometimes the police would show up and raid the place. And arrest patrons. And Stonewall was run by the mafia.

Whoa. Is that why Stonewall was raided that night?

Kind of. The police who showed up on June 28th, 1969, were different than the normal precinct cops, who had a running deal with the mafia. These new guys were investigating a blackmail scheme involving the owners of Stonewall. And brokers on Wall Street who were paying them off. And when they showed up: they were rough -- and patrons reacted more strongly than usual. Instead of heading home after the police raid, many patrons stayed outside. Some taunted police and threw things. The whole episode didn’t last long -- but the next night, more people turned up. It turned into six full days of protests.

So that’s the reason for Pride?

Kind of. In the wake of those protests, groups like the Gay Liberation Front and the Gay Activists Alliance were formed. A spin-off group led by local transgender activists Sylvia Rivera and Marsha P. Johnson helped homeless transgender youth. And on June 28th 1970 -- exactly one year after Stonewall -- protesters in New York held the first-ever Pride march. Everyone met at Stonewall and marched to Central Park. And at one point the march stretched for 15 blocks.

What happened to Stonewall after?

Fifty years ago, police raided a bar in New York City called the Stonewall Inn and arrested people inside. Gay and transgender people there resisted, and it led to a nearly weeklong protest in the heart of New York’s Greenwich Village. From there, local gay and transgender activists formed groups to push for the civil rights of the LGBTQ+ community. Today, the gay bar formerly run by the mafia and the surrounding area are now recognized as a National Historic Landmark commemorating that night. And the fight. Because civil rights for the LGBTQ+ community are still a battleground in some parts of the country. And around the world.