Laying Down the Law: The Supreme Court’s Biggest Decisions 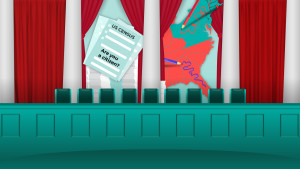 The Supremes have ruled on dozens of cases this past term, but two issues really stood out – and have far reaching implications for all Americans: whether the Trump administration can add a question about citizenship to the census - and whether political parties can cut voting districts to meet their own needs. Both are hot topics going into 2020.

That’s when voting districts are drawn in a way that benefits one group of people over another. One of the cases accused lawmakers of drawing maps to hurt the voting power of minorities, another said Democrats were disadvantaged, and the last said Republicans were getting the short stick.

Nope, and people on both sides of the aisle say gerrymandering has got to go. The Court sent the racial gerrymandering case back to a lower court and agreed that  Virginia had to change their maps. But they covered their ears for the two partisan gerrymandering cases in Maryland and North Carolina. They don’t want to hear about it. They said it’s not any federal court’s job to decide which party gets political power and influence, so they’re leaving these decisions up to Congress and the individual states in the future.

The Trump administration decided to add a question about citizenship to the 2020 Census. They said they wanted to use the answers to protect minority voters. But documents showed that the question could actually scare some people (read: 6.5 million) from filling out the questionnaire.

Go back to the drawing board. The Court was OK with adding the question in theory, but they thought the reason for adding the Commerce department gave seemed too “contrived.” They gave the administration another shot at coming up with a good reason to add it. But the clock is ticking - the Commerce Department has always said they need to head to the printers this month so you can get your 2020 Census on time.  And President Trump said he wasn’t standing down. Over the weekend … the Justice Department started working double-time … and even put new lawyers on the case. So basically, the whole situation is still TBD.

This is the Supreme Court’s first full term with a strong conservative majority in decades, and the decisions released in these landmark cases show that ideological divide. One was largely considered a big win for the Republicans, and the other could be a big loss for the Trump administration. As we prepare for the next round of Census data and redistricting, these decisions could have major implications for voters for a long time to come.