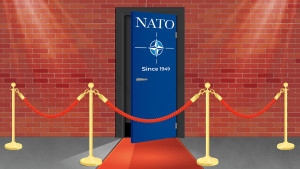 The North Atlantic Treaty Organization turns 70 on April 4th. NATO - the members-only club of 29 countries across Europe and North America. The biggest membership perk is Article 5: the clause that says an armed attack against one is an armed attack against all. NATO started mainly as anti-Communism defense pact, but now members contribute military forces to address all kinds of multinational issues -- from tensions stemming from the civil war in Syria to the migrant crisis in the Mediterranean and Aegean Sea. But there have been some internal issues lately. Spoiler: It’s about the $$.

But how did this all begin?

NATO was basically started as a “I got your back” promise.

After World War II, the four major Allied Forces - the U.S., the U.K., France and the Soviet Union - divvied up Germany and the city of Berlin. The U.S., the U.K. and France wanted to rebuild their part of the country - West Berlin and West Germany - into a strong, western capitalist country. The Soviet Union wanted to prevent Germany from becoming too powerful again. They were in control of the eastern part - and East Berlin.

In 1948, the Soviet Union blocked off all land and river access to West Berlin. It was called the Berlin Blockade. The U.S. responded by flying in supplies to the 2.5 million people living in West Berlin who were otherwise stranded. After a few months of this, the Soviets eventually backed down.

But after the blockade, some countries in Europe were worried that the Soviet Union could try to pull a Berlin Blockade on one of them. So on April 4, 1949, ten European countries plus Canada and the U.S. signed the NATO Treaty. With that promise to defend one another if the Soviet Union - or anyone else - tried to attack: that’s Article 5. And that worked for the next 40 years - until the end of the Cold War.

The Berlin Wall fell in 1989 -  and the Soviet Union collapsed. And NATO had an existential crisis: what’s our motto again?

NATO went from keeping an eye out for attacks to promoting peace -- and when that failed, taking action to stop wars and violence. They did it in Bosnia-Herzegovina. And in Kosovo.

The first and only time NATO invoked Article 5 was right after 9/11. NATO jumped to attention. They sent military planes to patrol the skies over the U.S. and they sent ships to watch for terrorist activity in the Mediterranean.

In the wake of events like Russia’s invasion of Crimea in 2014 and the rise of ISIS, NATO has found a newfound reason to stick together.

So, what’s the problem?

NATO has been in a bit of turmoil lately ... over money.

Members are supposed to be spending 2% of their GDP toward national defense -- it shows that they’re keeping their military muscles in shape to stand up for each other in case NATO has to go to war. But that hasn’t been happening. A lot of world leaders say having a big military isn’t the biggest priority for their voters.

And the U.S. is not happy about it. President Trump has called out Germany - the biggest European economy - as one of the worst offenders. He’s been so mad about the other members not coughing up their fair share that he’s reportedly even considered leaving NATO entirely. Experts say that’d be really bad. For the U.S. and the world.

But there’s one person who’d be all about that: Russian President Vladimir Putin. The Soviet Union may have dissolved, but Russia’s still got beef with NATO. And would love to see NATO go away.

But so far: that doesn’t seem to be happening. This week, NATO foreign ministers will be in the U.S. to catch up. And the head of NATO -- Secretary General Jens Stoltenberg -- will address a joint session of Congress. And meet with President Trump.

At 70, NATO’s had a long life. Its changed career goals a lot. Its original mission was in part to be a defense against the (communist) Soviet Union. Now it’s more about keeping the peace. Lately, the alliance's been showing its age and arguing about how to split the bill. President Trump’s keyed up about it. But as of now, the U.S. still calls NATO its crew.