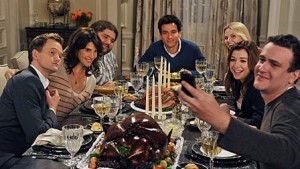 Hold on to your butts. The holiday season is here.

It’s bound to come up. You know we wouldn’t leave you hanging.

- Skimm Notes has the refresher you need on the impeachment inquiry and the 2020 election.

- Our impeachment guide has everything you need to know about how impeachment works, the allegations against Trump, and the impact the inquiry could have on the country.

- Our 2020 guide has everything you need to start prepping, from what to know about election interference to a rundown of every presidential candidate in the race.

Wallets at the ready. If you’re looking to do some damage this weekend, here’s your rundown:

- Nov. 29: Black Friday. Some ideas to work off the pumpkin pie: shopping bag bicep curls, store opening sprints, or finger typing cardio. Whatever your shopping style, get ready to rise and buy. We've got your guide to holiday shopping here.

- Nov. 30: Small Business Saturday. Today's the day to throw your mom-and-pop shops some love. Here's the plan: pick up local gifts for your friends and fam. Maybe even find something that everyone and their mother hasn’t already picked out.

Here’s what you can tune into when you need a break from the fam.

You showed your athleticism at the dinner table. Now watch some on the field. Here's who's playing...

- 12:30pm ET, Fox. Chicago Bears v Detroit Lions. These teams played each other on T-Day last year. The Bears took the W. And then the division championship. Eyes are on Lions QB Matthew Stafford. He was crushing it on the field earlier this season, until a back injury benched him. TBD if he'll be healthy enough to play. And don’t forget Bears QB Mitchell Trubisky, who’s trying to work his way up from an early-season rut.

- 4:30pm ET, CBS. Buffalo Bills v Dallas Cowboys. These teams rarely play together as the Cowboys normally attract bigger names on Turkey Day (think: Eagles, Giants). And people are paying attention to Cowboys QB and Sports Illustrated coverboy Dak Prescott. He threw seven touchdowns in the first two games of the season. But the Bills have some new blood to look out for. Like defensive tackle Ed Oliver, the Bills No. 1 draft pick who had strong hits early in the season.

- 8:20pm ET, NBC. New Orleans Saints v Atlanta Falcons. These teams battled it out last year on Thanksgiving, with the Saints winning 31-17. But this year the Falcons have home-field advantage. These teams have a history of racking up points on the scoreboard. But the Falcons are feeling extra pressure on the sidelines. The team's on edge after a 7-9 season last year ended with three of the team’s coordinators getting kicked to the curb. If you're going to watch one game, this should be it.

Nov. 22: "A Beautiful Day in the Neighborhood" out in theaters

Mister Rogers aka America's favorite neighbor is getting the big screen treatment. This biopic follows the relationship between Fred Rogers (hi Tom Hanks) and Tom Junod, a journalist writing a profile about him (hi Matthew Rhys). Junod's sort of skeptical of Rogers' positivity. Spoiler: that changes by the end of the movie. Watch the trailer.

And here's what to put on your cal for the next time you're with the fam:

In a galaxy far far away...it's time to say goodbye to the Skywalkers. This is supposed to be the last film that focuses on the fam. Adam Driver is back as Kylo Ren. Daisy Ridley is back as Rey. Carrie Fisher is there too, courtesy of unused old footage. Draw your lightsabers. Watch the trailer.

The best way to spread Christmas cheer...is getting elbow deep in a bucket of popcorn. Here are all the movies hitting theaters today…

- “Little Women.” Emma Watson, Saoirse Ronan, Timothée Chalamet...annnd Meryl Streep are just a handful of the actors taking on the latest adaption of the literary classic. Get ready to watch the four sisters’ coming-of-age stories, plus something new: there are reports this film will touch on sister Jo’s sexuality. Watch the trailer.

- “Just Mercy.” There’s already some Oscar buzz around this one. It's based on a book by IRL lawyer and civil rights advocate Bryan Stevenson (played by Michael B. Jordan). Also starring: Jamie Foxx. He plays a death-row inmate, who Stevenson believes is innocent. He goes to Alabama to give the inmate, and other wrongfully-convicted death-row prisoners, justice. Watch the trailer.

- “1917.” Time to watch a couple WWI British soldiers as they race to deliver a message before a catastrophic attack. Director (and first-time screenwriter) Sam Mendes based the movie off his grandfather’s stories from WWI. And he’s also trying to put the audience in the thick of it (think: showing the movie in one continuous shot). This strategy is getting him some awards buzz. Other faces to look out for on the battlefield: Benedict Cumberbatch, Colin Firth, and Richard Madden. Watch the trailer.

The holidays can be a lot. So be prepared for that heated political discussion with your uncle. And know what movies will let you spend that quality time with the fam...in a dark quiet room where nobody has to talk for hours.