Daily Skimm: Impeachment No. 2, COVID-19 Updates, and a Dire Ending for Dire Wolves 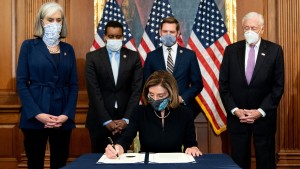 For the first time in history, a sitting US president has been impeached twice.

And it had quite the start. Since the deadly siege at the US Capitol, the country (and the world) has grappled with feelings of anger, shock, and horror that such an attack could happen. And some lawmakers moved quickly to hold people (including President Trump) accountable. Earlier this week, House Democrats introduced an article of impeachment against the president: "incitement of insurrection." And accused him of "willfully" encouraging his supporters to attack one of the highest levels of the US government. Yesterday, the House voted 232-197 to impeach Trump – for the second time in just over a year.

Unlike the first time, 10 Republican lawmakers joined their Democratic colleagues in favor of impeachment. It's the most bipartisan presidential impeachment in history. Some GOP lawmakers called the president's behavior a "betrayal" and argued voting against it would "validate the unacceptable violence." But others within the party said it would do more damage. House Minority Leader Kevin McCarthy (R-CA) argued it would "further fan the flames of partisan division." And Rep. Jim Jordan (R-OH) claimed Democrats were "canceling the president."

And what about the Dems?

All 222 Democratic lawmakers voted in favor. House Speaker Nancy Pelosi (D-CA) said the president's "clear and present danger" meant "he must go." And others like Rep. Jason Crow (D-CO) pleaded for his fellow Republican lawmakers to stop being "paralyzed with fear," show "courage," and vote to impeach.

It's unclear. Now that the House has impeached Trump, the Senate will decide whether to convict him. Given that Trump's term ends in six days, it's unlikely the Senate will vote to remove him from office before then. Especially since the upper chamber is in recess until Jan 19, and Senate Majority Leader Mitch McConnell (R-KY) doesn't plan on bringing them back early. So the Senate trial could be pushed into Biden's term, when Dems will have control of the Senate. If convicted, they could push to bar him from future political office, something that would require a simple majority of senators (read: 51). And they could also work to keep him from receiving benefits allotted to former presidents, like a pension and travel budget.

And in the meantime?

The president, who had called the second impeachment a "witch hunt," could spend his last days in office arguing that his remarks ahead of the Capitol riots are protected by the First Amendment. Meanwhile, the Republican Party appears to be split as several lawmakers broke with four years of Trump's politics. Already, there are calls to remove Rep. Liz Cheney (R-WY), the third-ranking House Republican, for supporting yesterday's impeachment vote. And some face death threats. For Dems, they have to decide how they'll juggle moving forward with a new admin while following through on intentions to convict the president.

Over the course of a week, the US has seen an attack on its democratic principles. And the fastest impeachment in history that proves that such threats on our nation have consequences, even for the president.

A week after the US Capitol was breached for the first time in over 200 years, current and future leaders stood up and gave a clear message:

President Trump...After he was impeached for the second time, the president shared a video message in which he "unequivocally" condemned last week's violent riots. Following reports of possible upcoming demonstrations, he urged for there to be "no violence, no lawbreaking, and no vandalism of any kind." And called on his supporters to think of ways to "ease tensions" and "help to promote peace in our country."

President-elect Joe Biden...As he transitions into his role as a world leader next week, he urged supporters not to attend his inauguration on Jan 20 and instead watch the events virtually. This is in part to follow safety guidelines amid the pandemic. And amid the threat of more armed protests. The president-elect has called for those involved in the Capitol riots to be held accountable.

And others...Washington, DC, officials said the number of troops helping secure the nation's capital could expand from 15,000 to 20,000. Meanwhile, Airbnb and HotelTonight are canceling and blocking reservations in DC ahead of the inauguration due to safety concerns.

Where things are breaking more records…

The US. Earlier this week, it hit another grim record of over 4,300 daily COVID-19 deaths. And the number of infections continues to rise despite a national vaccine rollout. Meanwhile, researchers in Ohio have discovered two new variants of the virus that likely originated in the US. They're different from the ones found in the UK and in South Africa. And while there's no evidence that they're deadlier, experts say they spread more easily – which could be a problem for already-struggling hospitals.

...Oh and amid the rise in cases, the NBA has postponed several games this week and tightened protocols. Masks on the bench are in, handshakes are out.

Who the US is sending a message to...

China. Yesterday, the US gov announced it would stop imports of certain goods (think: cotton, tomato products) from China's Xinjiang region. Reminder: That's where the Communist Party is accused of detaining more than 1 million Uighur Muslims and other ethnic minorities in forced labor camps. Now, US officials are reportedly saying they've got info that "reasonably indicates" the allegations are true. And they're taking a stand. Acting DHS Deputy Sec Ken Cuccinelli said the ban is to push China to abandon its inhumane practices. It's the Trump admin's latest effort to crack down on China.

Former Michigan Gov. Rick Snyder (R). Yesterday, he was charged for his role in the Flint water crisis. In 2014, state officials switched the city's water supply to a nearby river to cut costs. The problem: the water wasn't treated properly, leading local pipes to corrode and exposing tens of thousands of people in the majority-Black city to dangerous levels of lead. 12 people also died from Legionnaires' – a form of pneumonia that can come from bacteria thriving in water. Now, Snyder's been charged with willful neglect of duty and faces up to a year in prison. Snyder's defense team says there's "no evidence" to support criminal charges.

Apple. Yesterday, it announced new details on its plan to combat systemic racism and promote racial equality. The initiative includes: a $25 million donation to the Propel Center, which supports Historically Black Colleges and Universities. The launch of the Apple Developer Academy to support tech and coding students in Detroit. And venture capital funding for Black and Brown founders. Apple hopes these resources will "create meaningful change."

Sephora. Yesterday, it announced plans to combat racial bias at its stores. The company will stock the store shelves with more Black-owned brands and feature them more prominently there and on its website. It'll also reportedly revamp its marketing tactics to be more inclusive and provide its employees with diversity and inclusion training. On top of that, it plans to reduce the number of security officers in its stores and roll out a new greeting system to prevent unfair treatment of its customers.

...Oh and speaking of pushing for change, this new project is encouraging Black journalists to speak out about their experiences with racism.

When you play the game of evolution, you mate or you die.