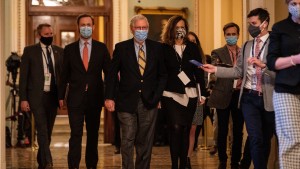 I unplugged this weekend.

Good for you. Here's what you missed: While former President Trump is the first US president to be impeached twice, he's now the first to be acquitted twice. After five days of debate and a last-minute surprise, the Senate took it to a final vote. Seven Republican senators sided with all 50 Democrats to find Trump guilty of "incitement of insurrection" – falling 10 votes short of the 67 needed to convict him. Out of the US's four impeachment trials, the 57-43 vote was still the most bipartisan margin in favor of conviction.

Yes. The first one has to do with witnesses. Some Dem lawmakers said that witnesses could've shone a light on Trump's actions (or inactions) the day of the Capitol attack, including that he may have known former VP Mike Pence was in danger but didn't call in the National Guard. Other Dems argued Republicans had already made up their minds and that witness testimonies would have delayed the process – and President Biden's agenda. After a back and forth, the impeachment managers ultimately decided not to call in witnesses, a move some Dems criticized as leaving potential evidence on the table.

What about the other surprises?

Moments after the vote, Senate Minority Leader Mitch McConnell (R-KY) grabbed the mic to say there's no doubt Trump is "practically and morally responsible for provoking" the Capitol riot. But he still voted to acquit him...because he doesn't believe a former president is "eligible" to be found guilty. As for the former president himself, he again called it a "witch hunt" and said his movement to Make America Great Again has "just begun." Meanwhile, a new poll found that nearly 60% of Americans wanted to see Trump convicted.

Now, the focus is on convicting those who stormed the Capitol. There's bipartisan support for the creation of a 9/11-style commission to investigate the riots and figure out what led up to the attacks. The new commission would look into things like the response from law enforcement and gov officials after threats of violence had circulated on platforms like Parler. Speaking of Parler, it's back up.

Now that the impeachment trial is over, accountability turns to the others who were involved in the riots that rocked our nation. But as the country moves toward healing, there's still a lot to be done to make sure such an attack never happens again.

Who's also been hearing the word 'impeachment' thrown around...

Andrew Cuomo. Last year, the Democratic New York governor gained national prominence (plus an Emmy and book deal) for his daily COVID-19 press briefings. But there's also been pushback. First, for his guidance that nursing homes take in COVID-19 patients. Then, for his data...or lack thereof. For months, state lawmakers, the Justice Dept, and the state AG have been looking into whether Cuomo's admin underreported nursing home deaths. Last month, NY AG Letitia James (D) said 'yup.' She found deaths were underreported by about 50% – by excluding cases where nursing home residents died elsewhere (like in hospitals). Only then did the state update its official nursing home death toll – from about 8,500 to more than 15,000 people.

ACA enrollment. Yesterday, the federal health insurance site (healthcare.gov) opened, allowing people to sign up for a health insurance plan or change up their existing plan. Last month, President Biden signed an executive order to allow a special enrollment period for the estimated 15 million people who are uninsured amid the pandemic. Now, it's officially open until May 15 for the 36 states that use the enrollment site. Other states that have their own marketplaces are taking similar steps.

...Oh, and speaking of the pandemic, the World Health Organization has approved the AstraZeneca-Oxford vaccine for emergency use. And gives developing countries access to a COVID-19 immunization.

Sia. The singer and director's facing new criticism from the autism community over her film, "Music." Advocates are condemning the casting decisions and for the use of restraints on a character who was depicted as having autism. Sia has apologized and said some scenes would be deleted from future film copies.

Who's singing 'every rose has its thorn'...

Who had the perfect message for Valentine's Day...