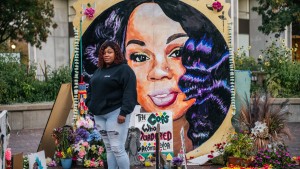 Not a single officer has been charged with killing Breonna Taylor.

Back in March, officers served a search warrant at Breonna Taylor's apartment in Louisville, KY, where the 26-year-old Black woman was asleep with her boyfriend Kenneth Walker. The officers have said they knocked and announced themselves before coming in. Walker says he didn't hear them and thought intruders were barging in, so he fired a "warning" shot. Officers fired back, striking Breonna Taylor six times, killing her. Her death fueled nationwide protests against police brutality and racial injustice. Now, 194 days later, a grand jury is saying two (of three) officers involved were "justified" to use force. Only one officer is being charged...for endangering Breonna Taylor's neighbors.

Former Officer Brett Hankison was charged with three first-degree counts of wanton endangerment. Under Kentucky law, a person is guilty of the crime if they show "extreme indifference to the value of human life." In this case, investigators found that Hankison fired 10 rounds blindly into Breonna Taylor's apartment which went through a wall – putting three neighboring residents at risk. He could face up to 15 years in prison. But Det. Myles Cosgrove – who authorities say fired the fatal shot that killed Breonna Taylor – and Sgt. Jonathan Mattingly are walking free.

Because it's nothing new. In the US, one analysis found that less than 2% of officers involved in a deadly shooting in recent years got charged with crimes. Kentucky's AG Daniel Cameron said, "sometimes the criminal law is not adequate to respond to a tragedy." And for months, people across the country have been calling for changes to our criminal justice laws – so things like this don't keep happening. But for now, Kentucky's governor wants the case details to be released, because Kentuckians "deserve to see the facts." And for many, the charges (or the lack of charges) were a slap in the face.

Breonna Taylor's family attorney called the decision "outrageous and offensive." The NAACP and the ACLU called it a "miscarriage of justice." Lawmakers, celebrities, and athletes took to social media to share their anger and their heartbreak. And Americans nationwide showed up to protest and demand justice in New York, Chicago, Atlanta, Grand Rapids, Philadelphia, Indianapolis, Los Angeles, and Washington, DC. In Louisville, things turned violent. Two officers were shot and wounded at the demonstrations. The police said they're both in stable condition and a suspect is in custody.

Breonna Taylor's case has caused outrage across the country. And highlights the glaring holes in the American justice system – if officers can shoot and kill a Black woman in her home...and only get charged for shooting a wall.

Vaccines. Yesterday, Johnson & Johnson began its final stage of clinical trials for its single-dose coronavirus vaccine. The company is a couple of months behind other large-scale trials but it's aiming to recruit 60,000 adult volunteers across the US and several other countries for its trial – one of the largest by far. Johnson & Johnson said it could know by the end of this year if the vaccine is a success. Meanwhile, Dr. Anthony Fauci said that if a safe and effective vaccine is found, there could be enough doses for everyone in the US by April.

Who people are showing up for…

Justice Ruth Bader Ginsburg. Yesterday, more than 100 of Ginsburg's former law clerks lined the steps of the Supreme Court as her casket was brought into the building – where family, colleagues, and members of the public paid their respects to the late justice. In a private ceremony, Chief Justice John Roberts called Ginsburg a "rock star" and said that although she had a soft voice, "when she spoke, people listened." Republicans and Democrats, including former President Bill Clinton (who nominated her to the Supreme Court in 1993), also honored her memory. Tomorrow, Justice Ginsburg will lie in state in the US Capitol – the first woman ever to receive that honor – before being buried at Arlington National Cemetery in a private service next week.

Where people are concerned...

Belarus. Yesterday, incumbent President Alexander Lukashenko – nicknamed "Europe's last dictator" – was sworn in for his sixth term in a secret inauguration ceremony. Reminder: Last month, Lukashenko won reelection with 80% of the vote in what many have called a rigged election. For weeks, people have taken to the streets demanding he resign. Some members of the opposition party have allegedly been kidnapped – and his main opponent fled the country after apparent threats. Now, the opposition is calling the secret ceremony a "farce" and world leaders are jumping in – including the US, which announced it wouldn't recognize Lukashenko as the country's legitimate president.

Where people have climate change on their minds...

California. Yesterday, its governor signed an executive order ending the sale of new gas-powered vehicles by 2035. The goal: more electric and eco-friendly vehicles in the Golden State. Somewhere, Elon is jumping for joy.

What's saying 'save the popcorn for later'...