Election: Nearly in the rearview mirror 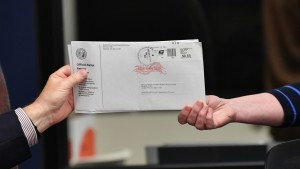 The 2020 election is nearly in the rearview mirror.

We'll get to it. But first, let's look back at the past four years. President Trump has built his reputation as a polarizing figure. He has a loyal base of supporters who like that he's not a career politician, embrace his "America First" ideology, and appreciate his record on issues like the economy. But his critics are just as vocal – calling him out for his chaotic leadership style, disregard for democratic norms, and racist and inflammatory rhetoric as the country faces a rise in white nationalism.

Let's. His signature 2016 issue was immigration. And he restricted it in a number of ways – including with the "zero tolerance" policy that led to family separations. He passed major tax cuts, appointed a record number of judges (including three Supremes), helped broker deals between Israel and four Arab countries, and enacted criminal justice reform. He also made new trade deals, reversed dozens of environmental regulations, and made moves to pull the US out of the Paris climate deal, the Iran nuclear deal, and the World Health Organization. His campaign was expected to run on the booming economy – with the lowest unemployment rate in decades. But then 2020 happened. First, Trump went on trial for impeachment. Then his handling of the COVID-19 pandemic became the big issue in the race.

Let's talk about it. Over the course of the election, a primary field of more than two dozen Democratic candidates (and what felt like as many debates) whittled down to one: President-elect Joe Biden. Many Dems considered the former Delaware senator and VP to be a safe bet against Trump. Turns out, they were right. In the general election, US voters turned out in record levels for both Biden and outgoing President Trump. But the results took days. The holdup that had the country glued to every Steve Kornacki update? Vote counting: As in, the pandemic brought with it a surge of mail-in votes. And some key swing states (Pennsylvania, Wisconsin, and Michigan) had laws holding election officials back from getting a meaningful head start on vote counting before Election Day. Still, by Saturday (four days after Election Day) Biden had topped the necessary threshold needed to secure the win – with the same number of expected electoral votes Trump won in 2016.

Enter: Trump's accusations of voter fraud that made no headway in the courts. For months before the election, Trump had warned there would be fraud...without evidence. On Election Day, accusations of voter fraud started popping up online. Those accusations have been debunked. But Trump still took to the courts...even as AG William Barr said the Justice Dept found no evidence of widespread fraud. More than 50 lawsuits have failed to convince courts of a single vote cast illegally for Biden. Ultimately, Biden got the official stamp of approval from the Electoral College, which swayed some Republican critics and encouraged Biden to 'keep calm and transition on.' But concerns that the election was "stolen" still persist.

Stay tuned. Trump is still spreading baseless claims of voter fraud. And has been trying to convince Republican lawmakers to reject the election results next month when Congress formally counts the Electoral College votes. But Sen. Majority Leader Mitch McConnell (R-KY) is already warning the party against it. Meanwhile, all eyes are on the runoff elections happening in Georgia on Jan 5 – which will determine which party controls the Senate when Biden takes office on January 20th. With a potentially split Congress it will be tough for Biden to hit 'reverse' on the past four years.

So what will he do?

Biden's promised to "restore" America's global and "moral leadership." And there are some foreign policy changes he can swing on his own – like rejoining the Paris climate deal and the Iran nuclear deal. Biden has also promised to fight COVID-19 starting on day one of his presidency, including pushing Americans to wear masks. And plans to focus on the economic crisis, racial injustice, and climate change. To get it done, he's been assembling a diverse team of Cabinet picks that he hopes will "look like America." And then, of course, there's Biden's VP. Kamala Harris will enter the White House as the first woman, first Black person, and first South Asian American to serve as vice president of the United States – breaking a glass ceiling that's been in place for over 230 years. It's still unclear what her role in the admin will be but it may depend on control of the Senate.

After years of heightened political polarization, the 2020 election was an opportunity for Americans across the political spectrum to take stock and weigh in on the direction of the country. They did just that – with Americans engaging in record-breaking turnout amid a once-in-a-century pandemic. Here's a closer look at some of the takeaways...

This Is How We Do It

This year, more than 156 million people voted, the most ever in a US election. Here's how voters across the aisle pulled off historic turnout amid a pandemic:

By mail…Because of COVID-19, over half of the states made it easier to vote by mail. And more than 65 million voters did. The USPS made it happen amid funding disputes and despite efforts to reduce hours and overtime pay. But it's called snail mail for a reason – and voters had to be patient for results, especially in states that don't allow vote counting until Election Day. And there were other challenges. Pennsylvania disqualified so-called naked ballots. And hundreds of thousands of ballots may have gone unscanned for delivery. But that doesn't mean they didn't get counted. Some systems were glitchy. And some drop-off locations were scarce. It came after President Trump cast doubt on mail-in voting for months, despite little evidence of voter fraud.

In person...Tens of millions of people braved a pandemic to exercise their right to vote in person. There were concerns about a poll worker shortage. But hundreds of thousands of younger Americans stepped up to volunteer. Some states expanded early in-person voting to reduce lines on any single day. But with record turnout, the long lines still came. Precautions at the polls included things like hand sanitizer, socially distanced lines, and lots of masks. It's still unclear whether in-person voting contributed meaningfully to the spread of covid. But one analysis from the primaries showed it didn't.

President Trump won more than 74 million votes, more than any first-term president in history. Still, he couldn't defeat President-elect Joe Biden – who won more than 81 million votes, the most votes for a presidential candidate in US history. But for a while, the results were close – so close that recounts were held in Wisconsin and Georgia. They highlighted the divisions between Americans…

At the polls...The country's top job (hello, Mr. President) wasn't the only box to check on your ballot. Democrats kept control of the House, but Republicans made gains, despite Dems spending a record amount of money. Come January, Dems are on track to have the slimmest House majority in nearly two decades. We're still waiting on Georgia to find out who controls the Senate. But even if Republicans lose it, Dems will need soon-to-be VP Kamala Harris to step in as tie-breaker.

On facts…Americans can't agree on some basic facts. Like who won the election. Or why you shouldn't get your news from message boards. Social media has a history of amplifying disinformation. And is accused of filtering out conservative voices, driving Americans further into silos. Others believe platforms are not going far enough in removing misinformation. Problem, when Americans are increasingly getting their news from social media or other potentially untrustworthy news sources. Also, when the leader of the country himself is spreading falsehoods on Twitter.

Some key election norms have been weakened. That includes trust in the voting process, the tradition of a concession, and a smooth transition. Here's a closer look at…

Election integrity…For months, the president of the United States worked to undermine confidence in the US election without evidence. The courts didn't bite. But over 73 million people voted for Trump. And many believe he was cheated out of a win. Here are the facts behind allegations of voter fraud.

Concession…President Trump has yet to formally concede the race. That, despite his General Services Administration ultimately signing off on Biden's victory. And despite Biden winning the same number of electoral votes Trump won in 2016. The refusal to concede reverses a tradition in place since 1896. So much for closure.

Transition process...President-elects typically have less than three months to coordinate with the outgoing admin and hire 4,000 political appointees. And each day counts. (Think: The 9/11 Commission Report found that the delayed Clinton-Bush transition left the US less prepared to deal with the September 11, 2001, terror attacks.) This year, the US lost more than two weeks to do things like onboard employees in critical agencies, as the country grappled with the third wave of a deadly pandemic. It's still unclear what the impact of the stalled transition could be.

The 2020 election brought mistrust and divisiveness. But it also brought record civic engagement and the "most secure" election in history. There's much to be proud of and much to keep working toward. So take a moment, pat yourself on the back for voting during a pandemic, and stay engaged.