December Democratic Debate: What to expect 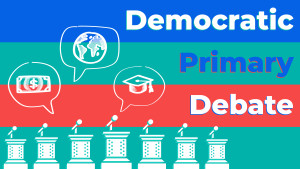 Another debate. It’s the sixth and final one of 2019. Happy holidays.

Thanks. Give me the details.

Los Angeles. Thursday, Dec 19 at 8pm ET. PBS NewsHour and POLITICO are your hosts. You can watch live on your local PBS station or on CNN. Or stream online at PBS.org or POLITICO.com. PBS’s Judy Woodruff, Amna Nawaz, Yamiche Alcindor, and POLITICO’s Tim Alberta are asking the questions.

Which candidates are showing up to this one?

Yup. The last debate in November had 10 candidates. But this debate was the hardest one to qualify for because the DNC raised the thresholds (think: even more donors and support in some polls). The goal: start weeding out those who are less likely to win the Democratic nomination. It seems to be working.

A few candidates have recently dropped out of the race. That includes Sen. Kamala Harris (D-CA), who qualified for the debate but said her campaign didn’t have enough money to keep going. On top of that, Rep. Tulsi Gabbard (D-HI), who made it to the last five debates, was thiiiis close to qualifying, but missed the polling threshold. And then there are the new kids on the 2020 block: former MA Gov. Deval Patrick – who didn’t meet the polling and donor thresholds – and former NYC Mayor Michael Bloomberg – who isn’t taking money from donors aka will never meet that threshold for making it on a Democratic debate stage.

Got it. What can I expect to hear about at the debate?

Diversity…the 2020 race started out as the most diverse primary field ever. But with Harris dropping out, and many of the remaining non-white candidates failing to qualify for the debate, voters have been concerned about the lack of diversity among the top candidates. Some who didn’t qualify – like Sen. Cory Booker (D-NJ) and former HUD Secretary Julián Castro – have been critical of the DNC’s requirements. The lack of diversity could hurt Democratic candidates with two key voting blocs: black women and Hispanics. And candidates could be forced to acknowledge this issue on the debate stage.

Impeachment…yes, this will probably come up. The House voted to impeach President Trump the day before the debate. One thing that’s on some of the candidates’ minds is the next step: the Senate trial. That could keep top candidates like Warren and Sanders off of the campaign trail for weeks.

Polls…Biden and Sanders have been solid frontrunners from the start. But Buttigieg and Warren have been fighting for a top spot in voters’ hearts. Buttigieg in particular is leading in Iowa – a key battleground state that kicks off the 2020 election in February with its caucuses. So don’t be surprised if the other candidates try to take him down a notch.

Health care…pretty much the no. 1 topic at every debate. In 2018, Democrats won the House in part on their health care campaign, which included criticizing Republicans for trying to repeal Obamacare. But in 2020, Dems aren’t as united on this front. On the one hand, there’s Sanders and Warren, who have had to defend their progressive Medicare for All plans and the costs to fund them. On the other hand, there’s Biden and Buttigieg, who have stayed firm on their moderate policies to let people opt in to gov-backed insurance or keep their private insurance. The lack of unity within the party could be a turnoff for voters.

There’ll be six more Democratic primary debates in 2020. But this is the first time in this race that such a small group will take the stage. It means they’ll have more time to pitch themselves as the party’s best shot at winning the White House. And since we’re a month and a half out from the start of the primary voting season, that’s crucial now more than ever.

Skimm More: Want a heads-up on when big events (like debates, major primary elections, and Election Day) are going down? theSkimm App syncs our calendar with yours. Start your free trial.