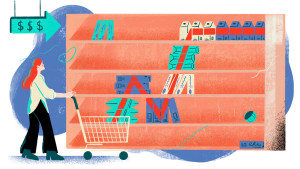 The economic recovery is real, but we're not out of the woods yet.

America hoped for a quick return to normal in 2021. But turns out, bouncing back from a global health catastrophe isn't easy. New COVID-19 variants haven't helped. While the US continues getting back on its feet, here are some of the money issues that still need work.

The cost of the cure: In January, President Joe Biden picked up where the Trump admin left off, propping up the economy with relief measures. Think: extra unemployment benefits, a pause on evictions and federal student loan bills, an expanded child tax credit, near-zero interest rates, and stimulus payments. Stimmies worked to keep many Americans out of poverty and fueled others' interest in investing manias (more on that later). But not everyone was included in the economic recovery. Plus, all that extra financial aid contributed to massive federal deficit levels and...

Drama on the Hill: After dropping nearly $2 trillion on another pandemic relief package, some lawmakers were resistant to more government spending. Even to avoid a shutdown or hitting the debt ceiling — although both crises were averted. Twice. That threw a wrench in Biden’s plans to build up the nation's infrastructure. His OG proposal included investing in health care, education, curbing climate change, and advancing racial equity...for the low, low price of $6 trillion. Republicans (and some Dems) said 'think again,' and Congress spent most of the year negotiating. The infrastructure bill Biden ultimately signed into law in November cost about $1 trillion. Much of the eliminated social investments (hi, paid leave) were meant to go into a second spending bill…that may be DOA (bye, paid leave?).

Supply got low, low, low, low, low: TP was back on the shelves, but 2021 had plenty of its own shortages. Including ketchup packets, furniture foam, cars, smartphones, fuel, workers, and more. Why? Pandemic-era shutdowns put a halt to production and shipping, even as Americans continued clicking 'add to cart.' And supply-chain disruptions (including ransomware attacks) continued to ripple through this year. That all led to...

Prices headed higher and higher: Along with shortages and stimmies, "revenge spending" (aka splurging to make up for lost time) fueled inflation. Making just about everything — from airfare and food to gas and cars — more expensive. Or just a little worse than it was before. The Federal Reserve says some inflation, around 2%, signals a healthy economy. But in November, the Consumer Price Index (which measures the average prices of groceries, housing, and other necessities) rose 6.8%, the biggest annual jump since 1982. Experts think inflation issues will continue well into 2022 (despite shoppers' "inflation denial"). To help, the Fed is planning a big policy shift — from focusing on measures that help boost the economy to ones that cool things off and curb rising prices. On the agenda: raise interest rates at least three times next year and speed up plans to “taper” its bond-buying program.

COVID-19 relief efforts may be winding down. But the effects of the pandemic — and all that gov spending and support — will likely have a lasting ripple effect. Read: higher prices, slower economic growth, and maybe a new vocab word for 2022: “stagflation.”

More than a year of unprecedented times was bound to create new trends — like these big ones from 2021:

What investors couldn't (Game)stop obsessing over…

Investing manias. Think: meme stocks, NFTs, and crypto (oh my). In January, amateur traders — who had the time, boredom, and stimulus money to consider new ways to invest — coordinated using social media and forums like Reddit to send certain stocks' prices "to the moon." And try to force the hedge funds that bet against them to lose a lot of money. Some fan faves: AMC, Blackberry, and yep, GameStop. Shares of the video game retailer were below $5 in 2020 and driven as high as $483 this year. Trading got so wild at some points that Robinhood and other brokers cut it off, a move some thought unfairly protected hedge funds from losses. But the SEC later said that everything was quite all right.

Who went crazy about crypto…

Just about everyone, including Redditors, TikTok influencers, and VIPs like Mark Cuban, Lindsay Lohan, Snoop Dogg, and Elon Musk. Even El Salvador got in on the crypto craze, officially making Bitcoin a national currency and planning to build the first "Bitcoin City." (Not legit: this "Squid Game" crypto.) China, on the other hand, said 'no more' and declared all mining and transactions illegal. Which made the US chant 'we're number 1' in bitcoin mining hubs.

Who was cheering, 'b-e aggressive'…

Homebuyers. The pandemic created a high demand for a change of scenery and more space at home — the hottest (only) place to be in 2020. Record-low mortgage rates made homeownership feel more attainable. But lumber shortages and skyrocketing construction costs kept the supply of new homes low. Enter: an ultra-competitive housing market with inflated asking prices, bidding wars, and all-cash offers. Things appear to be cooling off. Partly because many who haven't bought yet either can't afford it or are tired of trying.

What struggled to make the perfect match…

The job market. A record number of people have been quitting their jobs, and women are leading the way. More than 2 million have left the workforce this year alone. That's even as employers are desperately trying to fill a record number of job openings, especially in food services, entertainment, finance, and health care. Some hiring managers say the mismatch is because applicants don't have the right skills. Workers say the available jobs aren't offering the right wages, benefits (hi again, paid leave), and overall quality of life.

Next year's financial forecast: things will stay interesting. Being proactive can put you in the best possible position.

The pandemic pause on federal student loans has been extended (for the fifth time) until May. Make a plan to use the extra time wisely and pay off the debt (eventually). Oh, and hit up your (possibly new) loan servicer to make sure your contact and loan info are correct.

Tell your budget to suck it in.

Supply-chain disruptions and labor shortages are expected to stick around. Meaning higher prices will, too. Stay a step ahead by finding ways to make more room in your budget. One idea: negotiate some bills.

Despite *all this,* the stock market hit many record highs this year. Some experts think it could reverse course soon. Don't give up on your investments if it does. Down days (and even years) are normal, and, historically, overall stock prices have shaken them off and continued heading up. If you're a long-term investor, it can pay to do nothing. Or if you're feeling spicy, you could shop for stocks "on sale." Psst...investing can help you overcome the many financial obstacles facing women, including needing more money in retirement.

The money world's triple threat, who's gone where no man has gone before. On top of being the first woman to serve in her current role as Treasury Secretary, she was also the first female Fed boss and head of the White House Council of Economic Advisers. Making her the first person to hold the US's top three economic jobs. A few highlights from her 2021 resume: urging Congress to increase pandemic relief measures like the expanded child tax credit, winning support for a global minimum tax, and lobbying to raise the debt ceiling. Missions accomplished.